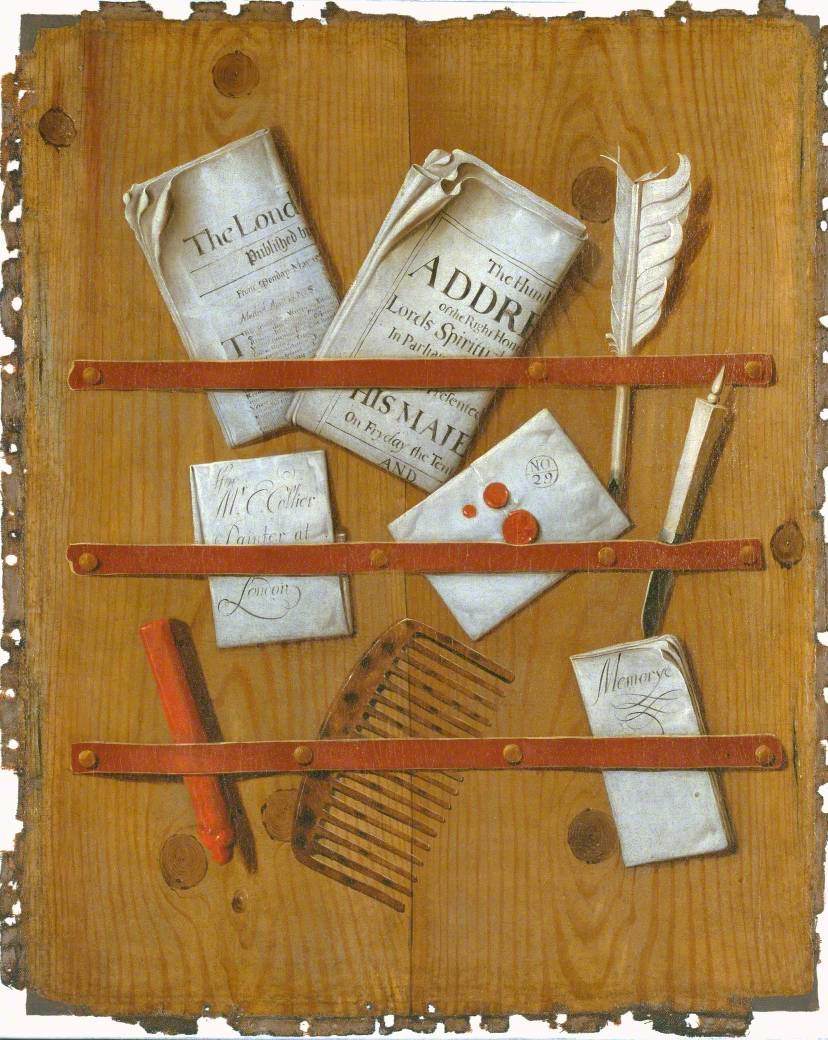 Trompe l'oeil pieces (or 'deceptions' as they were commonly called) were among the most popular paintings to be found in the collections of well-to-do English households of the seventeenth century. Their practitioners were chiefly painters from the Low Countries, of which Collier was one. Although often contemplative in nature, their main objective was to startle the eye with a virtuoso ability to create the illusion of graspable objects in paint.

Read more
The trompe l'oeil letter rack with notes, newspapers, writing implements, seals and combs was one of Collier's favourite, and most commercially popular, subjects. Many variations of it are known, with similar objects slightly differently arranged but always with different dates and printed texts. Although this picture bears no year, a clue is given by the folded London newspaper dated 'Monday, May 15 ... ' with a report datelined 'Madrid, April 29, N. S.' (the text is not designed to be legible). The only likely Monday to fall on this date was in 1699. Alongside the newspaper is a folded broadsheet printed with an address presented by both Houses of Parliament to the King (presumably William III), datelined 'Fryday the Tenth ... '. In addition to the folded paper with the painter's inscription, there is a letter bearing a circular stamp 'NO|129' and sealed with three pieces of red wax, one of them impressed with a profile head, and a folded paper inscribed 'Memorye'. Other items are a quill pen, a penknife with an ivory handle, a stick of red sealing wax, and a tortoiseshell comb. All objects are held by three red leather straps against a light pine board made up of two planks. Many of Collier's trompe l'oeil and vanitas paintings (still-lifes with symbolic objects suggesting the transience of mortal life) include English texts and objects and seem to have been painted for the English market, a common practice for Dutch painters working in Holland. A number of paintings dated for the years 1695–1698, however, bear inscriptions describing Collier as a 'Painter at London', indicating that he spent some time here.

A Trompe l'oeil of Newspapers, Letters and Writing Implements on a Wooden Board