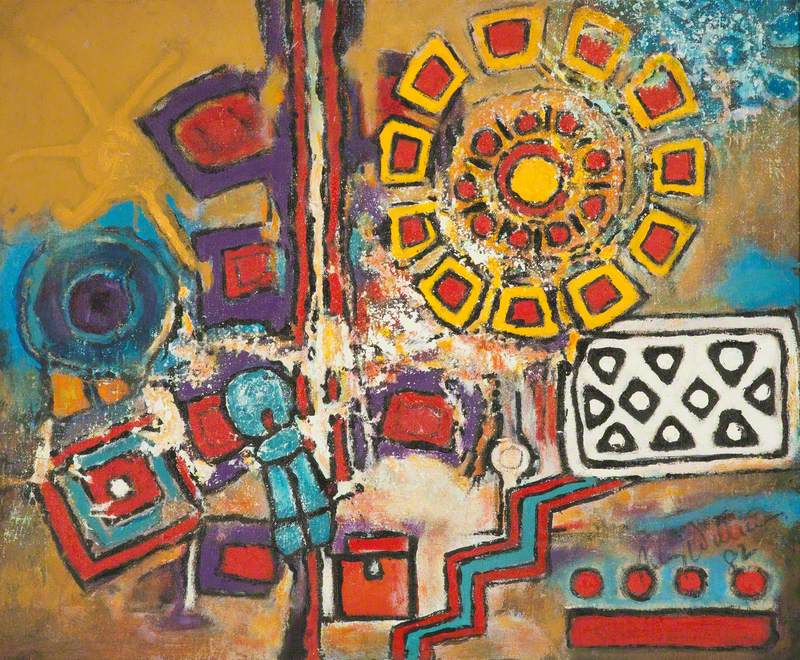 Painter, born in Georgetown, British Guiana, now Guyana. His first art education was with the Working People’s Art Group, but it took an encounter with the Warrau Indian tribe to decide him to pursue the course he did in painting. Coming to England in 1952 Williams decided against a career in agricultural engineering and attended St Martin’s School of Art, 1952–3, having his first one-man show in 1954 at the Archer Gallery. In the mid-1960s he was active in the London-based Caribbean Artists’ Movement, he was showing widely in group exhibitions in Britain and abroad and was painting a series of murals. After a while Williams’ career tended to be diverted to fringe galleries when he fell out of general favour. Arshile Gorky, the pre-Colombian iconography of Guyana and in the 1970s a series of pictures inspired by the Russian composer Shostakovitch all had their place in Williams’ art.

Read more
Among a series of one-man shows were several in the October Gallery in the 1980s, with a retrospective in Tokyo in 1989, another at Whitechapel Art Gallery, 1998. Was represented in The Other Story, Hayward Gallery and tour, 1989–90. In 2002, the October Gallery put on a show of Williams’ work dating mainly from the 1950s, with another show, Dreams and Visions, in 2004. Lived latterly in London and Miami and is represented in Arts Council and other collections.