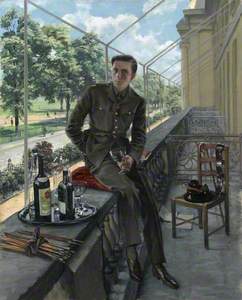 (b Eltham, Kent [now in Greater London], 24 June 1905; d nr. Le Mesnil, Normandy, 18 July 1944). British painter, graphic artist, and stage designer. He is best known for his decorations in a light and fanciful style evocative of the 18th century, notably the series of murals In Pursuit of Rare Meats (1926–7) in the restaurant of the Tate Gallery (now Tate Britain). He also did numerous book illustrations and much work for the stage, including ballet and opera.
Read more
He was killed in action in the Second World War. His brother Sir Laurence Whistler (1912–2000), a writer and glass engraver, published several books on him.