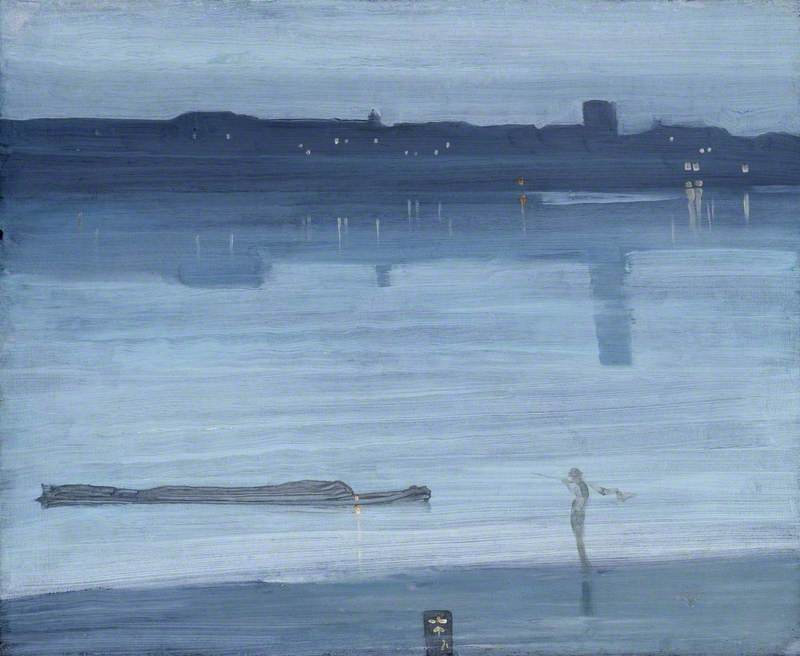 (b Lowell, Mass., 11 July 1834; d London, 17 July 1903). American painter, printmaker, and designer, active mainly in England. Initially he was called James Abbott Whistler, but after his mother's death in 1881 he added her maiden name to become James Abbott McNeill Whistler for a time, and eventually he dropped the ‘Abbott’. He spent part of his childhood in Russia (where his father had gone to work as a civil engineer) and was an inveterate traveller. His training as an artist began indirectly when, after his discharge from West Point Military Academy for ‘deficiency in chemistry’, he learnt etching as a US navy cartographer. In 1855 he moved to Paris, where he studied intermittently under Gleyre, made copies in the Louvre, acquired a lasting admiration for Velázquez, and became a devotee of the cult of the Japanese print (see Ukiyo-e) and oriental art and decoration in general.

Read more
The circles in which he moved can be gauged from his friend Fantin-Latour's Homage to Delacroix, in which Whistler is portrayed alongside Baudelaire, Manet, and others. He settled in London in 1859, but often returned to France. His first major oil painting, At the Piano (1858–9, Taft Mus., Cincinnati), was well received at the Royal Academy exhibition in 1860 and he soon made a name for himself, not just because of his talent, but also on account of his flamboyant personality: he was famous for his wit and dandyism, and loved controversy. He enjoyed a lavish lifestyle and was often in debt. Dante Gabriel Rossetti and Oscar Wilde were among his famous friends.Whistler's art is in many respects the opposite to his ostentatious personality, being discreet and subtle, but the creed that lay behind it was radical. He believed that painting should exist for its own sake, not to convey literary or moral ideas, and he often gave his pictures musical titles to suggest an analogy with the abstract art of music: ‘Art should be independent of all claptrap—should stand alone, and appeal to the artistic sense of eye or ear, without confounding this with emotions entirely foreign to it, as devotion, pity, love, patriotism, and the like. All these have no kind of concern with it, and that is why I insist on calling my works “arrangements” and “harmonies”.’ He was a laborious and self-critical worker, but this is belied by the flawless harmonies of tone and colour he created in his paintings, which are mainly portraits and landscapes, particularly scenes of the Thames. No less original was his work as a decorative artist, notably in the Peacock Room (1876–7) for the London home of the Liverpool shipping magnate Frederick Leyland (now reconstructed in the Freer Gallery, Washington), where the graceful, stylized patterning anticipated much in the Art Nouveau style of the 1890s (Aubrey Beardsley saw the room in about 1891 and was greatly impressed by it). In 1877 Whistler showed his Nocturne in Black and Gold: The Falling Rocket (1875, Detroit Inst. of Arts) at the opening exhibition of the Grosvenor Gallery. Ruskin attacked it in print, accusing him of ‘flinging a pot of paint in the public's face’, and Whistler sued him for libel. He won the action, but the awarding of only a farthing's damages with no costs was in effect a justification for Ruskin, and the expense of the trial led to Whistler's bankruptcy in 1879—a tribulation he endured with dignity. His house was sold and he spent a year in Venice (1879–80), concentrating on the etchings that helped to restore his fortunes when he returned to London. He was one of the greatest of all etchers (some critics rank him second only to Rembrandt) and also made lithographs. In his fifties he began to achieve honours and substantial success (he also made a happy marriage, in 1888, to Beatrix Godwin, widow of the architect E. W. Godwin, with whom he had collaborated, but she died only eight years later). In 1891 his portrait of Thomas Carlyle (1872–3) was bought by the Corporation of Glasgow, becoming the first of his oils to enter a public collection in Britain, and in the same year his most famous work, Arrangement in Grey and Black: Portrait of the Painter's Mother (1871), was bought by the French state (it is now in the Musée d'Orsay, Paris). Whistler's paintings are related to Impressionism (although he was more interested in evoking a mood than in accurately depicting the effects of light), to Symbolism, and to Aestheticism, and he played a major role in introducing modern ideas to British art. Those who were most immediately influenced by him included his pupils Walter Greaves (1849–1930), Gwen John, the Australian-born Mortimer Menpes (1860–1938), and Walter Sickert. His aesthetic creed was explained in his Ten O'Clock Lecture (1885) and this, and much else on art and society, was republished in The Gentle Art of Making Enemies (1890).