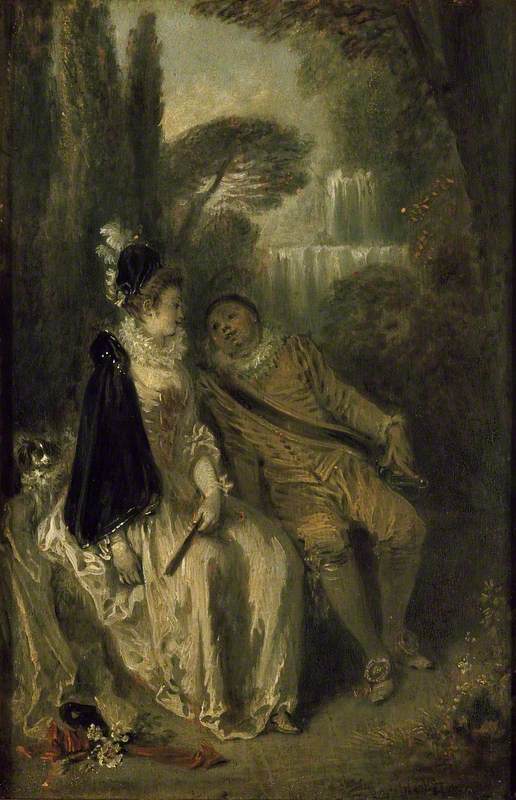 (bapt. Valenciennes, 10 Oct. 1684; d Nogent-sur-Marne, nr. Paris, 18 July 1721). The greatest French painter of his period and one of the key figures of Rococo art. His home town of Valenciennes had passed to France from the Spanish Netherlands only six years before his birth, and he was regarded by contemporaries as a Flemish painter. There are indeed strong links with Flanders in his art, but it also has a sophistication that is quintessentially French. He moved to Paris in about 1702 and c.1704–8 he was a pupil and assistant of Gillot, who stimulated his interest in scenes from the theatre and daily life. After leaving Gillot he worked for a year or two for Claude Audran, who as well as being a leading decorative painter was curator of the Luxembourg Palace; Watteau thus had access there to Rubens's Marie de Médicis paintings, which were of enormous influence on him, even though Rubens's robustness was far removed from the exquisite sensitivity that characterized his own art.

Read more
Rubens was one of the prime inspirations for the type of picture with which Watteau is most associated—the fête galante (see fête champêtre)—in which beautifully dressed young people idle away their time in a dreamy, romantic, pastoral setting. The tradition of lovers in a parkland setting goes back via Giorgione to the medieval type known as the ‘Garden of Love’, but Watteau was the first painter to make the theme his own, and his individuality in this respect was recognized by his contemporaries: in 1717 he submitted a characteristic work, The Pilgrimage to the Island of Cythera (Louvre, Paris; a slightly later variant is in Schloss Charlottenburg, Berlin), as his reception piece to the Academy, and because of the difficulty of fitting him into recognized categories he was received as a ‘peintre de fêtes galantes’, a title created expressly for him. He was, indeed, a highly independent artist, who did not readily submit to the will of patrons or officialdom, and the novelty and freshness of his work liberated French painting from the yoke of Italian influence, creating a truly ‘Parisian’ outlook that endured until the Neoclassicism of J.-L. David.Watteau's world is a highly artificial one (apart from scenes of love he took his themes mainly from the theatre), but underlying the frivolity is a feeling of melancholy, reflecting the certain knowledge that all the pleasures of the flesh are transient. This poetic gravity distinguishes him from his imitators, and parallels are often drawn between Watteau's own life and character and the content of his paintings. He was notorious for his irritable and restless temperament and died young of tuberculosis, and it has been suggested that the pervasive melancholic mood of his pictures was related to the constant reminders of his own mortality that his illness entailed. In 1719–20 he visited London to consult the celebrated physician Dr Richard Mead (who was also an art collector), but the hard English winter worsened his condition. His death came when he may have been making a new departure in his art, for his last major work combines something of the straightforward naturalism of his early pictures in the Flemish tradition with the elegant sophistication of his fêtes galantes: it was painted as a shop sign for the picture dealer Edmé Gersaint (a close friend, in whose arms Watteau died) and is known as L'Enseigne de Gersaint (1721, Gemäldegalerie, Berlin). Watteau was slipshod in matters of material technique (another aspect of his listless temperament) and many of his paintings are in consequence in a poor state of preservation. A complete picture of his genius depends all the more, then, on his numerous superb drawings, many of them scintillating studies from the life. He collected his drawings into large bound volumes and used these books as a reference source for his paintings (the same figure often appears in more than one picture). In spite of his difficult character, he had many loyal friends and supporters who recognized his genius, and although his reputation suffered with the Revolution and the growth of Neoclassicism, he always had distinguished admirers. It is perhaps as a colourist that he has had the most profound influence. His method of juxtaposing flecks of colour on the canvas was carried further by Delacroix and later reduced to a science by Seurat and the Neo-Impressionists. Among his immediate followers, the principal figures were Lancret and J.-B. Pater. He also had a nephew and a great-nephew (father and son) who worked more or less in his manner. They are both known as ‘Watteau de Lille’ after their main place of work—Louis Watteau (1731–98) and François Watteau (1758–1823).