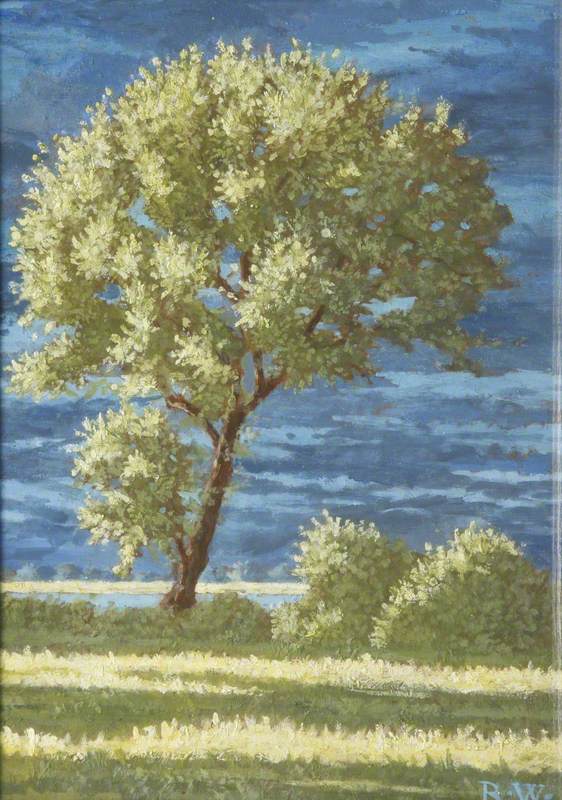 Visionary painter, wood engraver, translator and poet, who grew up in the Suffolk countryside and whose work was inspired by a boyhood visit to San Marco Convent, Florence, Italy, and the work of Fra Angelico. After gaining a first-class honours degree in English literature at Lincoln College, Oxford, Wagner was a guest student of Peter Greenham at the Royal Academy Schools, 1978–81. His pictures, which followed a study of the classic themes of Renaissance painting, stemmed from a strong Christian faith. William Blake, Samuel Palmer and the English pastoral tradition, Paul Nash and Stanley Spencer were exemplars. Wagner took part in many group exhibitions, latterly including Blake’s Heaven, Scolar Fine Art, 2001; Roads to Damascus, The Brewhouse Gallery, Eton College, 2002; and Presence, St Paul’s Cathedral, 2004.

Read more
Among his solo shows, which included a series at Anthony Mould Contemporary from 1985 and number at English Cathedrals, was The Prince’s Foundation in 2001. Writing at the time of Wagner’s solo exhibition at The Ashmolean Museum, Oxford, in 1994, Godfrey Barker in The Daily Telegraph termed the artist “An English Visionary of Genius”. Apart from his own poetry, Wagner in 1994 published through The Besalel Press The Book of Praises: A Translation of the Psalms, his own translation from the Hebrew, a limited edition on hand-made paper illustrated with the artist’s engravings. It encompassed Book One of the Psalter, part of a project designed to encompass all five books. Peter Levi, Oxford Professor of Poetry, 1984–9, thought it “excellent beyond all expectation.” Wagner lived and worked in Oxford.