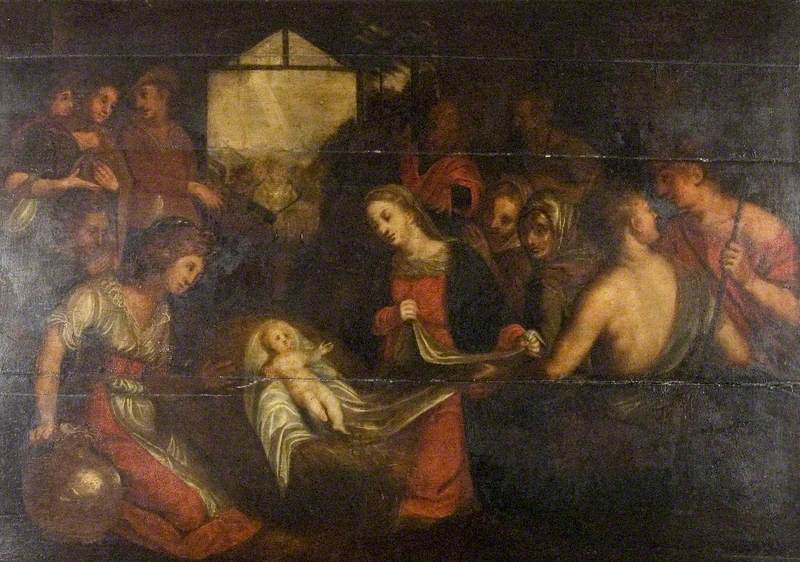 The Adoration of the Shepherds

(b Verona, ?1528; d Venice, 19 Apr. 1588). Italian painter. His nickname derives from his native city of Verona. He trained there with the undistinguished Antonio Badile (c.1518–60), whose daughter he later married, but from about 1553 he was based in Venice and he is considered a member of the Venetian School. With Tintoretto he became the dominant figure in Venetian painting in the generation after Titian and he had many major commissions. Although he was sometimes in direct competition with Tintoretto, generally they worked for rather different markets and they seem to have been on good terms personally. Both of them were at their best on a large scale, but whereas Tintoretto concentrated on religious pictures, Veronese also did numerous secular commissions.

Read more
Some of his finest work was produced outside Venice and in fresco, whereas Tintoretto worked almost exclusively in the city itself and in oils. Stylistically they had little in common: Tintoretto's most characteristic paintings are intensely emotional, with the drama played out in a dark, brooding atmosphere; Veronese preferred the clear light of day and subjects that made their impact through pomp rather than passion.Veronese established a distinctive style early in his career and thereafter developed relatively little. Few of his paintings are dated or can be reliably dated, so it is difficult to construct a chronology for him. Similarly, because he had such a highly organized studio and his output was so large, there can be problems in distinguishing the work of his own hand. Nevertheless, his status and achievement are clear. He was one of the greatest of all decorative artists, delighting in painting enormous pageant-like scenes that bear witness to the material splendour of Venice in its Golden Age. Marble columns and costumes of velvet and satin abound in his work, and he used a sumptuous but delicate palette in which pale blue, orange, silvery white, and lemon yellow predominate. In his religious works his penchant was for feast scenes from the Bible. His love of richness and ornament got him into trouble with the Inquisition in a famous incident in 1573 when he was interrogated about a painting of the Last Supper that he had crowded with such irrelevant and irreverent figures as ‘a buffoon with a parrot on his wrist…a servant whose nose was bleeding…dwarfs and similar vulgarities’. Veronese staunchly defended his right to artistic licence: ‘I received the commission to decorate the picture as I saw fit. It is large and, it seemed to me, it could hold many figures.’ He was instructed to make changes, but the matter was resolved by simply changing the title of the picture so that it represented a less solemn meal from the Bible, the Feast in the House of Levi. It was painted for the refectory of the monastery of SS. Giovanni e Paolo, Venice, and is now in the Accademia.Veronese's secular works include the delightfully light-hearted frescos (including illusionistic architecture and enchanting landscapes) decorating the Villa Barbaro at Maser, near Treviso (c.1561), a series of four canvases, Allegory of Love (c.1575, NG, London), probably painted for the emperor Rudolf II (see Habsburg), and the resplendent Triumph of Venice (c.1585) on the ceiling of the Hall of the Great Council in the Doges' Palace, Venice. He also painted portraits. His studio was carried on after his death by his brother Benedetto Caliari (1538–98) and his sons Carlo (c.1567–92/6) and Gabriele (1568–1631). He had no significant pupils, but his influence on Venetian painting was important, particularly in the 18th century, when he was an inspiration to the masters of the second great flowering of decorative painting in the city, above all Tiepolo.