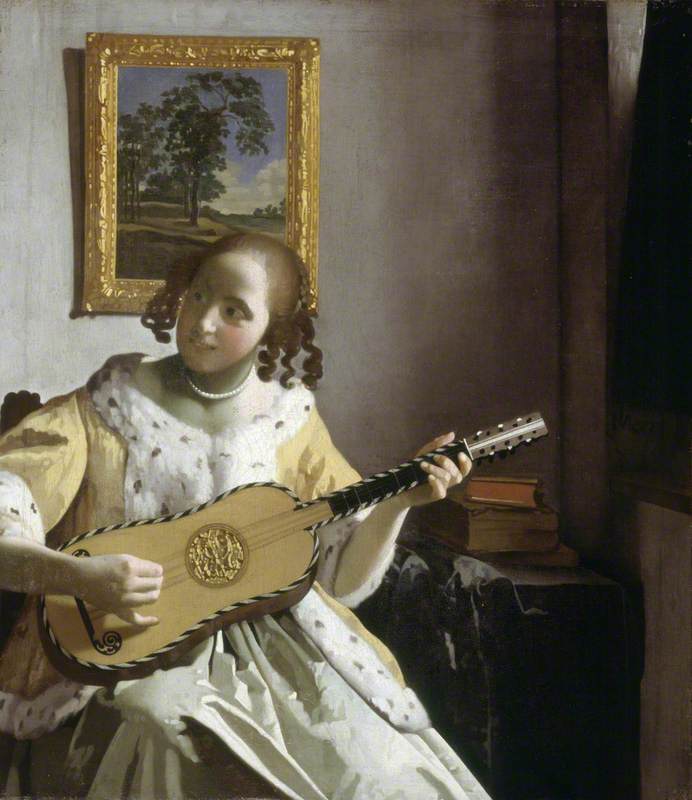 (Baptised Delft, 31 October 1632; buried Delft, 16 December 1675). Dutch painter. Among the great Dutch artists of the 17th century, he is now second in renown only to Rembrandt, but he made little mark during his lifetime and then long languished in obscurity. Almost all the contemporary references to him are in colourless official documents and his career is in many ways enigmatic. As far as is known, he lived all his life in his native Delft and rarely made even local journeys outside it. He became a member of the painters' guild there in 1653 and was twice elected hooftman (headman), but it is not known who taught him. His name is often linked with that of Carel Fabritius, but it is doubtful if he can have been Vermeer's teacher in the formal sense; this distinction may belong to Leonaert Bramer, although there is no similarity between their work. Only about 35 to 40 paintings by Vermeer are known, and although some early works may have been destroyed in the disastrous Delft gunpowder explosion of 1654, it is unlikely that the figure was ever much larger: this is because most of the Vermeers mentioned in early sources can be identified with surviving pictures, whilst only a few pictures now attributed to him are not mentioned in these sources—thus there are few loose ends.

Read more
This small output may be at least partially explained by the fact that he almost certainly earned most of his living by means other than painting. His father kept an inn and was a picture-dealer and Vermeer very likely inherited both businesses. In spite of this he had grave financial troubles (he had a large family to support—his wife bore him fifteen children, eleven of whom survived him). His money problems increased after the French invasion of 1672, which devastated the Dutch economy, and his widow was declared insolvent the year after his death.

Only three of Vermeer's undoubted paintings are dated: The Procuress (1656, Gemäldegalerie, Dresden), The Astronomer (1668, Louvre, Paris), and its companion The Geographer (1669, Städelsches Kunstinstitut, Frankfurt). (Another signed and dated picture, St Praxedis Mopping up the Blood of the Martyrs of 1655, appeared in the 1960s, but its authenticity has been questioned. It is in a private collection.) It is difficult to fit his other paintings into a convincing chronology, but his work nevertheless divides into three fairly clear phases. The first is represented by only two works—Christ in the House of Mary and Martha (NG, Edinburgh) and Diana and her Companions (Mauritshuis, The Hague)—both probably dating from a year or two before The Procuress. They are so different from Vermeer's other works—in their comparatively large scale, their subject matter, and their handling of paint—that Diana and her Companions was for a time attributed to an obscure namesake, Jan Vermeer of Utrecht (c.1630–after 1692).

The Procuress marks the transition to the middle phase of Vermeer's career, for although it is fairly large and warm in tonality—like the two history paintings—it is a contemporary life scene, as were virtually all Vermeer's pictures from now on. In the central part of his career (into which most of his work falls) Vermeer painted those serene and harmonious images of domestic life that for their beauty of composition, brushwork, and treatment of light raise him into a different class from any other Dutch genre painter. The majority show one or two figures in a room lit from the onlooker's left, engaged in domestic or recreational tasks. The predominant colours are yellow, blue, and grey, arranged in flawless cool harmonies, and the compositions have a purity and dignity that confer on them an impact out of relation to their small size. In reproduction his pictures can look quite smooth and detailed, but Vermeer often applies the paint broadly, with variations in texture suggesting the play of light with exquisite vibrancy—the Dutch artist and critic Jan Veth (1864–1925) aptly described his paint surface as looking like ‘crushed pearls melted together’. From this period of Vermeer's greatest achievement also date his only landscape—the incomparable View of Delft (Mauritshuis), in which he surpassed even the greatest of his specialist contemporaries in lucidity and truth of atmosphere—and his much-loved Little Street (Rijksmuseum, Amsterdam).

Another painting of this period is somewhat larger in size and unusual in subject for him—The Artist's Studio (KH Mus., Vienna), in which Vermeer shows a back view of a painter, perhaps a suitably enigmatic self-portrait. In the third and final phase of his career Vermeer's work lost some of its magic as it became somewhat harder. There are still wonderful passages of paint in all his late works, but the utter naturalness of his finest works is gone. The only one of his paintings that might be considered a failure, the Allegory of Faith (Met. Mus., New York), belongs to this period. His wife was a Catholic and he may well have been converted to her religion, but this rather lumbering figure shows he was not at ease with the trappings of Baroque allegory. There are symbolic references in other paintings by him, but they all—except for this one—make sense on a straightforward naturalistic level.

No drawings by Vermeer are known and knowledge of his working methods has largely to be deduced from close examination of his paintings. It is virtually certain, however, that he sometimes made use of a camera obscura: the exaggerated perspective in some of his pictures (in which foreground figures or objects loom unexpectedly large) and the way in which sparkling highlights appear slightly out of focus are effects duplicated by unsophisticated lenses. The scientist Antony van Leeuwenhoek (1632–1723), celebrated for his work with microscopes, became the executor of Vermeer's estate and it may well have been an interest in optics that brought them together.

Vermeer's work was admired in his lifetime, but after his death his name quickly passed into obscurity. During the 18th century his pictures were sometimes attributed to other artists who were better known at the time, such as Frans van Mieris, and in 1833 the British picture dealer John Smith (1781–1855), a pioneer in the scholarly study of Dutch art, wrote of Vermeer: ‘This painter is so little known, by reason of the scarcity of his works, that it is quite inexplicable how he attained the excellence many of them exhibit.’ The key figure in rediscovering Vermeer was Thoré, who published a series of articles on him in the Gazette des beaux-arts in 1866 and memorably dubbed him ‘the Sphinx of Delft’.