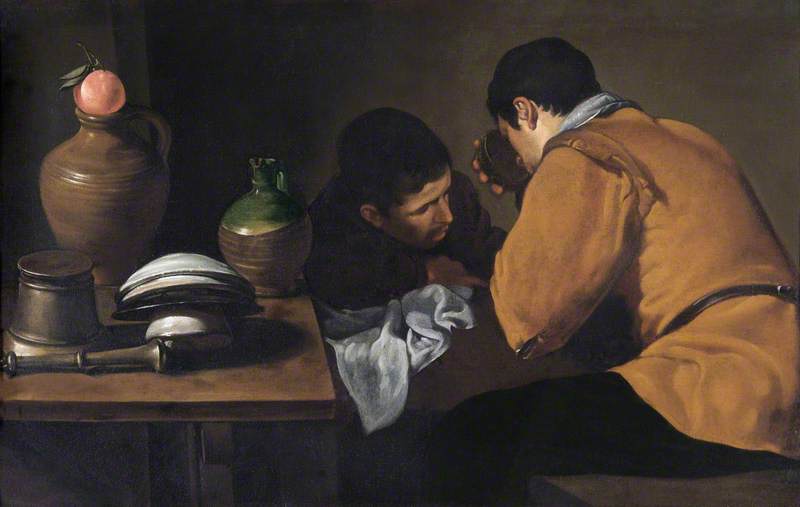 (Baptised Seville, 6 June 1599; died Madrid, 6 August 1660). The greatest painter of the Spanish School, chiefly renowned as one of the supreme portraitists in world art. He spent most of his career at the court in Madrid, but he grew up in Seville, where in 1610/11 he was apprenticed to Pacheco (possibly following a brief period of study with Herrera the Elder). In 1617 he qualified as a master painter and in the following year he married Pacheco's daughter. Velázquez was exceptionally precocious and while he was still in his teens he painted pictures that display commanding presence and complete technical mastery. Pacheco's own style in religious paintings was ‘dry and insipid’ (Palomino), but he was a sympathetic teacher and Velázquez followed his advice to ‘go to nature for everything’: in works such as the Immaculate Conception (c.1618, NG, London) and the Adoration of the Magi (1619, Prado, Madrid) he developed a more lifelike approach to religious art, in which the figures are treated like portraits rather than ideal types (his young wife may be the model for the Virgin in both these pictures). The light, too, is realistically observed, even though it has a mysterious, spiritual quality. In their strong chiaroscuro as well as their naturalism such pictures show an affinity with the work of Caravaggio and his followers, but the supple, clotted brushwork is already entirely Velázquez's own. In addition to religious pictures, his early work included several bodegones, a type of genre scene to which he brought a new seriousness and dignity: the best known among them is The Waterseller of Seville (c.1620, Wellington Mus., London), in which the water dripping down the jug shows his remarkable ability to create a sense of almost palpable reality.

Read more
In 1622 Velázquez paid a short visit to Madrid, during which he painted a portrait of the poet Luis de Góngora (MFA, Boston). In the following year he was recalled to the capital by Philip IV's (see Habsburg) chief minister, the Count-Duke Olivares, and painted a portrait of the king (now lost) which pleased Philip so much that he appointed Velázquez one of his court painters and declared that now only he should paint his portrait. Thus, at the age of 24, he suddenly became the country's most prestigious painter, and he kept his position as the king's favourite unchallenged for the rest of his life. With his appointment as court painter, the direction of Velázquez's work changed. He entirely abandoned bodegones, and although he painted historical, mythological, and religious pictures intermittently throughout his career, he was from now on primarily a portraitist.

Technically, too, his work changed as a result of his move to Madrid, his palette lightening and his brushwork becoming broader and more fluid under the influence particularly of the Titians in the royal collection. Although his portraits of the king and his courtiers are grand and dignified, he humanized the formal tradition of court portraiture derived from Mor and Sánchez Coello, setting his models in more natural poses and giving them greater life and character. The king (who was six years younger than Velázquez) had an extremely high opinion of the artist's personal qualities as well as his artistic skills, and the warmth with which he treated him was considered astonishing, given the stiff etiquette for which the Spanish court was renowned. In 1627 Philip made Velázquez ‘usher of the chamber’, the first of a series of appointments that brought him great prestige but took up much of his time in trivial bureaucratic matters, thus partly accounting for his fairly small output as a painter. He was conscientious in his duties, however, and evidently well suited to them temperamentally: the Italian painter Marco Boschini (1605–81) described him as ‘a courtly gentleman of such great dignity as distinguishes any person of authority’.

In 1628–9 Rubens visited Spain on a diplomatic mission and he and Velázquez became friends. Palomino records that the contact with Rubens ‘revived the desire Velázquez had always had to go to Italy’, and the king duly gave him leave to travel there. He was in Italy from 1629 to 1631, visiting Genoa, Venice, and Naples, but spending most of his time in Rome. Two major paintings date from this period—Joseph's Coat (Escorial, Madrid) and The Forge of Vulcan (Prado), works that show how his brushwork loosened still further under the influence of the great Venetian masters and how his mastery of figure composition matured. The 1630s and 1640s (before he again left for Italy) were the most productive period of Velázquez's career. His series of royal and court portraits continued and he expanded his range in a series of glorious equestrian portraits (Prado). In these he showed an unprecedented ability to attain complete atmospheric unity between foreground and background in the landscape. Their rhetorical poses are in the Baroque tradition, but they are without bombast or allegorical embellishments and as portraits are characteristically direct. The same ability to look beyond external trappings to the human mystery beneath is seen in his incomparable series of portraits of the pitiful court fools (Prado)—dwarfs and idiots whom Philip, like other monarchs, kept for his amusement. Velázquez presents them without any suggestion of caricature, but with pathos and human understanding, as if they too are worthy of his respect.

During the 1630s and 1640s he occasionally painted religious and mythological works, but they are all eclipsed by his great masterpiece of contemporary history painting, the Surrender of Breda (1634–5, Prado), one of a series of twelve paintings by various court artists glorifying the military triumphs of Philip's reign that were executed for the new Buen Retiro Palace in Madrid. The composition is highly organized, but Velázquez creates a remarkable sense of actuality and no earlier picture of a contemporary historical event had seemed so convincing. Characteristically, he concentrates on the human drama of the situation, as Ambrogio Spínola, the chivalrous Spanish commander, receives the key of the town from Justin of Nassau, his vanquished Dutch counterpart, with a superb gesture of magnanimity.

Between 1648 and 1651 Velázquez paid another visit to Italy to purchase paintings and antiquities for the royal collection. Again, he spent most of the time in Rome, where he painted several portraits, including two of his most celebrated works—Juan de Pareja (1650, Met. Mus., New York) and Pope Innocent X (1650, Gal. Doria Pamphili, Rome). Juan de Pareja (c.1610–c.1670), who was himself a painter, was Velázquez's mulatto slave (his master granted him his freedom while they were in Rome), and Velázquez painted this portrait because he felt he needed some practice before tackling that of the pope. The Innocent X is by common consent one of the world's supreme masterpieces of portraiture, unsurpassed in its breathtaking handling of paint and so incisive in characterization (suggesting cruelty and suspicion as well as wily intelligence) that the pope himself said the picture was ‘troppo vero’ (‘too truthful’). While in Rome Velázquez fathered an illegitimate son, Antonio, by a widow named Martha, but nothing is known of what became of mother or child. They may have been on Velázquez's mind when he applied for (and was refused) permission to return to Italy in 1657, but his life and work continued to unfold with the same sober dignity and the skeleton in his cupboard remained hidden until 1983, when the documentation was first published.

In his final years in Madrid, Velázquez continued to acquire new honours (the greatest was being made a knight of the Order of Santiago in 1659) and to reach new heights as a painter. His last portraits are mainly of the new young queen, Mariana of Austria (Philip's second wife, whom he married in 1649), and of the royal children. In these works his brushwork has become increasingly sparkling and free, and the gorgeous clothes the sitters wore (such a change from the sombre costumes of the king and male courtiers) allowed him to show his prowess as a colourist (several examples are in the Kunsthistorisches Museum, Vienna). Velázquez never ceased to base his work on scrutiny of nature, but his means grew increasingly subtle, so that detail is entirely subordinated to overall effect. Thus in his late works space and atmosphere are depicted with unprecedented vividness, but when the pictures are looked at closely the forms dissolve into what Kenneth Clark called ‘a fricassee of beautiful brushstrokes’. As Palomino put it, ‘one cannot understand it if standing too close, but from a distance it is a miracle.’

The culmination of Velázquez's career is Las Meninas (The Maids of Honour) (c.1656, Prado). It shows him at his easel, with various members of the royal family and their attendants in his studio, but it is not clear whether he has shown himself at work on a portrait of the king and queen (who are reflected in a mirror) when interrupted by the Infanta Margarita and her maids of honour or vice versa. Velázquez's prominence in the picture seems to assert his own importance and his pride in his art, but in the background he has included two pictures by Rubens showing the downfall of mortals who challenge the gods in the arts. Apparently spontaneous but in the highest degree worked out, it is both Velázquez's most complex essay in portraiture and an expression of the high claims he made for the dignity of his art. Luca Giordano called it ‘the Theology of Painting’ because ‘just as theology is superior to all other branches of knowledge, so is this the greatest example of painting’. Posterity has endorsed his verdict, for in a poll of artists and critics in the Illustrated London News in August 1985, Las Meninas was voted—by some margin—‘the world's greatest painting’.

The number of good contemporary copies of Velázquez's work indicates that he ran a busy studio, but of his pupils only his son-in-law Mazo achieved any kind of distinction. As with most Spanish painters, Velázquez remained little known outside his own country until the Napoleonic Wars brought Spain into the mainstream of European affairs. The opening of the Prado in 1819, with 44 of his paintings on display, made his work much more accessible than it had ever been before, and from the mid-19th century his technical freedom was an inspiration to many progressive artists, above all Manet, who regarded him as the greatest of all painters. The bulk of Velázquez's work is still in Spain, and his genius can be fully appreciated only in the Prado, which has most of his key masterpieces. Outside Spain, he is best represented in London—in the National Gallery, which has his only surviving female nude, the Rokeby Venus (c.1648), in the Wellington Museum, and in the Wallace Collection.