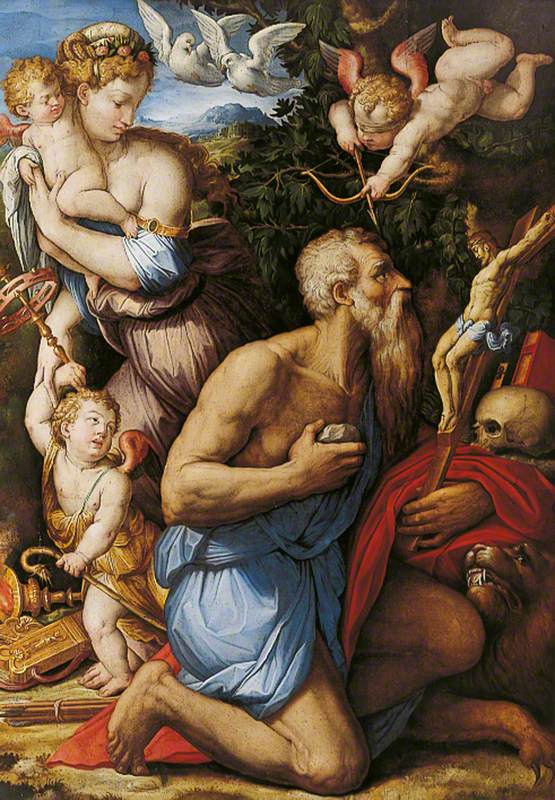 The Temptation of Saint Jerome 1546

(b Arezzo, 30 July 1511; d Florence, 27 June 1574). Italian painter, architect, and writer, active mainly in Florence and Rome. In his day he was a leading painter, architect, and artistic impresario, but his activities in these fields have been totally overshadowed by his role as the most important of all artistic biographers. His great book, generally referred to as Lives of the Artists, has earned him the title of the father of art history: it is not only the fundamental source of information on Italian Renaissance art, but also a key document in shaping attitudes about the period for centuries afterwards. (The book was first published in Florence in 1550 as Le vite de' più eccellenti architetti, pittori, et scultori italiani (The Lives of the Most Eminent Italian Architects, Painters, and Sculptors); in 1568 there was a second, much enlarged edition, in which the title is slightly changed, the painters being mentioned first.

Read more
) Vasari wrote from a particular aesthetic viewpoint, and his book is not only a collection of biographies but also a critical history of style. He believed that art is in the first instance imitation of nature and that progress in painting consists in the perfecting of the means of representation. He thought that such representational skills had been taken to high levels in classical antiquity, that art had then passed through a long period of decline in the Middle Ages, and that it had begun to revive in the 14th century in Tuscany (he was heavily biased in favour of his own region). The main theme of the Lives was to set forth this revival—its initiation by Cimabue and Giotto, its steady advance at the hands of such artists as Brunelleschi, Donatello, and Masaccio, and its culmination with Leonardo, Raphael, and above all Michelangelo, whom Vasari idolized and whose biography was the only one of a living artist to appear in the first edition of his book (the second edition adds accounts of several artists then living, including Vasari's autobiography). The idea of artistic ‘progress’ that he promoted subsequently coloured most writing on the period. Given the wide scope and vast size of the book (the second edition has roughly the same wordage as the Bible), it is not surprising that it contains many errors and contentious points (see, for example, Castagno and Sarto). However, by the standards of the time Vasari was a diligent researcher and he gathered together an enormous amount of invaluable information, which he presented in a lively style, full of memorable anecdotes. Moreover, his qualitative judgements have generally stood the test of time well: the artists and works he most admired are by and large still the ones we most admire today. His book became the model for artistic biographers in other countries, such as van Mander in the Netherlands, Sandrart in Germany, and Palomino in Spain.As a painter, Vasari was one of the most prolific decorators of his period, but he is not now highly regarded, his work representing the most inbred and affected kind of Mannerism. His best-known achievement in this field is probably the decoration (1546) of the grand salon in the Palazzo della Cancelleria, Rome, with scenes celebrating the life of Pope Paul III, commissioned by his grandson, Cardinal Alessandro Farnese. Pressed for quick results by the cardinal, Vasari enlisted a team of assistants and finished the work within a hundred days, earning the room its nickname of the Sala dei Cento Giorni. When Michelangelo was told of the remarkable speed with which the work had been accomplished, he is said to have made the withering response ‘E si vede’ (‘So it appears’). As an architect Vasari has a higher reputation: his most important building is the Uffizi in Florence, and he designed and decorated his own house in Arezzo, now a museum dedicated to him. He also designed Michelangelo's tomb (1570) in S. Croce, Florence. In addition, Vasari was the first important collector of drawings, using them partly as research material for his biographies, for the insight they gave into the creative process, and he also played the leading role in establishing Florence's Accademia del Disegno (see academy).