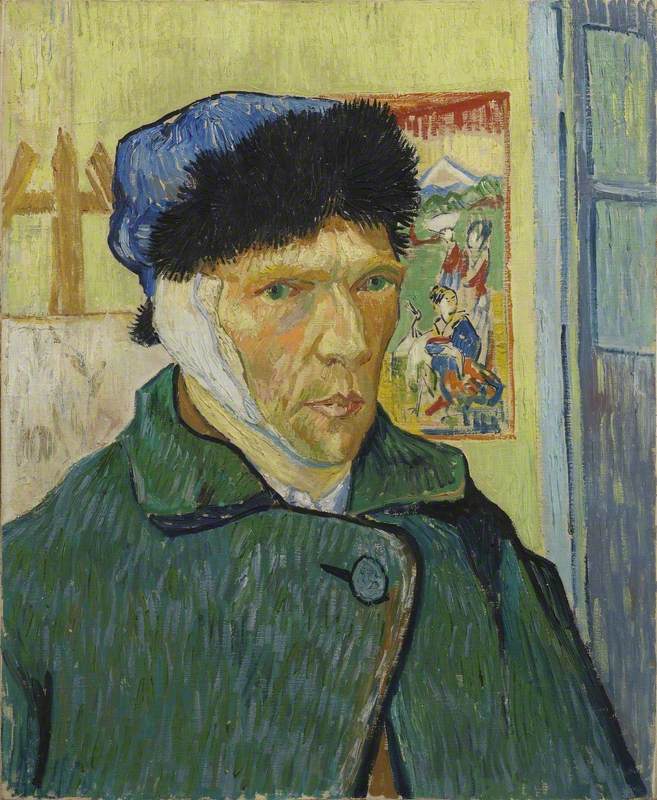 (Born Zundert, North Brabant, 30 March 1853; died Auvers-sur-Oise, 29 July 1890). Dutch painter and draughtsman, active for much of his brief career in France, with Cézanne and Gauguin the greatest of Post-Impressionist artists. His uncle was a partner in the international firm of picture dealers Goupil and Co. and in 1869 van Gogh went to work in the branch at The Hague. He was a good linguist, and from 1873 to 1876 he worked at the London and Paris branches. Initially he did well, but early in 1876 he was obliged to resign because of his erratic behaviour, caused by an unrequited passion for his landlady's daughter (or perhaps for the widowed landlady herself; the evidence is vague). This was the first of several disastrous attempts to find happiness with a woman. Throughout most of 1876 he was again in England, working as a teacher in Ramsgate, Kent, and Isleworth, Middlesex, and as an assistant to a Methodist minister, his experience of urban squalor having awakened a religious zeal and a longing to serve his fellow men. His father was a Protestant pastor, and van Gogh began to train for the ministry, but he abandoned his studies in 1878 and went to work as a lay preacher among the impoverished miners of the grim Borinage district in Belgium. In his zeal he gave away his own worldly goods to the poor and was dismissed for his literal interpretation of Christ's teaching. He remained in the Borinage, suffering acute poverty and a spiritual crisis, until 1880, when he found that art was his vocation and the means by which he could bring consolation to humanity. From this time he worked at his new ‘mission’ with single-minded intensity, and although he often suffered from extreme poverty and undernourishment, his output in the ten remaining years of his life was prodigious: about a thousand paintings and a similar number of drawings. The spontaneous, irrational side of his character has often been stressed, but he was a cultivated and well-read man, who in spite of his speed of work thought deeply about his paintings and planned them carefully.

Read more
From 1881 to 1885 van Gogh lived in the Netherlands, sometimes with his parents, sometimes in lodgings, supported by his devoted brother Theo (1857–91), a picture dealer in Paris who regularly sent him money from his own small salary as well as art materials and prints. Their correspondence is an extraordinarily rich source of information on van Gogh's life and art. Initially he confined himself to drawings, and they dominate the first half of his career. He experimented with various media, including waxy black lithographic chalk, which encouraged the bold, strongly outlined style he favoured in his early work. Later he preferred pen and ink, which he used with much greater spontaneity in rapid dots and flicks that pulsate with the same kind of life as the swirling brushstrokes that came to characterize his paintings.

He took up oils in 1882 and in keeping with his humanitarian outlook he painted peasants and workers, the most famous picture from this period being The Potato Eaters (1885, Van Gogh Mus., Amsterdam). Of this he wrote to Theo: ‘I have tried to emphasize that those people, eating their potatoes in the lamp-light have dug the earth with those very hands they put in the dish, and so it speaks of manual labour, and how they have honestly earned their food.’ In 1885 van Gogh moved to Antwerp on the advice of Anton Mauve (a cousin by marriage), and studied for some months at the Academy there. Academic instruction had little to offer such an individualist, however, and in February 1886 he moved to Paris, where he met Degas, Gauguin, Pissarro, Seurat, and Toulouse-Lautrec. At this time his painting changed abruptly in style under the combined influence of Impressionism and Japanese woodcuts (see Ukiyo-e), losing its moralistic flavour and revelling in the beauty of colour. Unlike the Impressionists, however, he did not use colour for the reproduction of visual appearances, atmosphere, and light. ‘Instead of trying to reproduce exactly what I have before my eyes,’ he wrote, ‘I use colour more arbitrarily so as to express myself more forcibly.’ Of his Night Café (1888, Yale Univ. AG), he said: ‘I have tried to express with red and green the terrible passions of human nature.’ For a time he was influenced by Seurat's delicate pointillist manner, but he abandoned this for broad, vigorous brushstrokes.

In February 1888 van Gogh settled at Arles in the south of France, where he painted more than 200 canvases in fifteen months. During this time he lived in poverty and suffered recurrent nervous crises with hallucinations and depression. He became enthusiastic for the idea of founding an artists' co-operative at Arles and in October he was joined by Gauguin. However, as a result of a quarrel between them van Gogh suffered a crisis in which he cut off part of his left ear (24 December 1888), an event commemorated in his Self-Portrait with Bandaged Ear (1889, Courtauld Gal., London); epilepsy and schizophrenia are among the causes that have been suggested to account for his mental disturbances. In May 1889 he went at his own request into an asylum at St Rémy, near Arles, but during the year he spent there he continued a fervent output of tumultuous pictures such as The Starry Night (1889, MoMA, New York). He produced 150 paintings (as well as drawings) in the course of this year.

In 1889 Theo married and in May 1890 van Gogh moved to Auvers-sur-Oise, to the north of Paris, to be near him, lodging with the patron and connoisseur Dr Paul Gachet. There followed another tremendous burst of activity and during the last 70 days of his life he painted 70 canvases. But his spiritual anguish and depression became more acute and on 29 July 1890 he died from the results of a self-inflicted bullet wound; Theo died six months later and was buried alongside him in Auvers. Van Gogh sold almost nothing during his lifetime and was little known to the art world at the time of his death, but his fame grew rapidly thereafter. His influence on Expressionism, Fauvism, and early abstraction was enormous, and it can be seen in many other aspects of 20th-century art. His passionate life and unswerving devotion to his ideals have made him one of the great cultural heroes of modern times, providing the most auspicious material for the 20th-century vogue in romanticized psychological biography, notably Irving Stone's novel Lust for Life (1934) and the Hollywood film of the same name (1956).