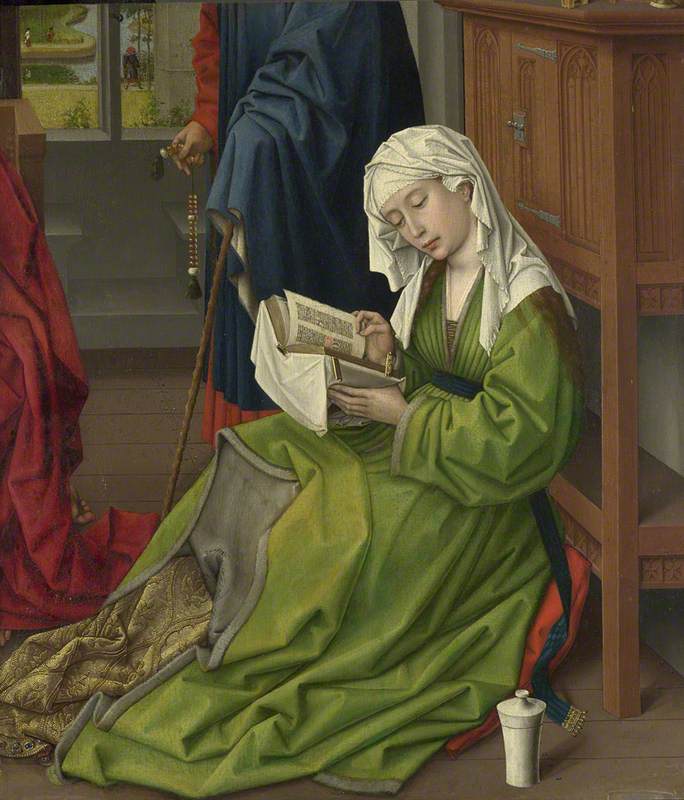 The Magdalen Reading before 1438

(b Tournai, c.1399; d Brussels, 18 June 1464). The outstanding Netherlandish painter of the mid-15th century. He was one of the greatest and most influential European artists of his time, but there is little secure knowledge about his career. None of the surviving paintings associated with him are signed, dated, or verified by indisputable contemporary documentation, but several can be identified from early sources, and the style these show is so distinctive that a coherent oeuvre has been built up around them.

Read more
His early career, however, is still a particularly problematic area, as the sparse evidence relating to it is teasingly equivocal. In 1427 a certain ‘Rogelet [little Roger] de la Pasture’ began an apprenticeship with Robert Campin in Tournai, and in 1432 he became a master in the city's painters' guild. It is generally accepted that these documentary records refer to Rogier van der Weyden (the French and Flemish forms of the name both meaning ‘Rogier of the Meadow’), although it is uncertain why he should have started his apprenticeship so late. There are no documented pictures surviving from Campin's hand, but he is generally agreed to be identical with the Master of Flémalle, so the whole question of Rogier's relationship with his master is based on stylistic analysis. Some scholars have argued that the Master of Flémalle should be identified with the young Rogier rather than with Campin, but the prevailing opinion now is that Rogier's work shows a development from the vigorously naturalistic and expressive style of his master towards greater refinement and spirituality. Rogier's celebrated Descent from the Cross (c.1440, Prado, Madrid), for example, is close to the Master of Flémalle's powerful Crucified Thief fragment (Städelsches Kunstinstitut, Frankfurt) in its dramatic force and use of a plain gold background, but it has a new poignancy and exaltedness.By 1435 Rogier had moved to Brussels and in 1436 he was appointed official painter to the city. There is evidence that he made a pilgrimage to Rome in 1450, but otherwise nothing to indicate that he ever left Brussels again. His work there included four large panels on the theme of justice for the courtroom of the town hall (these were his most famous pictures until they were destroyed during the French bombardment of the city in 1695), but all his surviving paintings are either religious pictures or portraits. The portraits are all of fairly similar type, showing the sitter, whether male or female, bust-length and in three-quarter view, with aristocratic bearing and a pious expression (Portrait of a Lady, c.1460, NG, Washington). They are among the finest of their time, but Rogier's reputation rests mainly on his religious works, which are remarkable for their magisterial power of design and their emotional intensity and sensitivity. The largest and most magnificent among them is the Last Judgement altarpiece (c.1445–50, Hôtel-Dieu, Beaune), which in size and ambition invites comparison with the Ghent Altarpiece of Jan van Eyck. The contrast with the cool objectivity of this great precursor was well summed up by Erwin Panofsky: ‘Roger's world is at once physically barer and spiritually richer than Jan van Eyck's. Where Jan observed things that no painter had ever observed, Roger felt and expressed emotions and sensations—mostly of a bitter or bittersweet nature—that no painter had ever recaptured.’ Unlike Jan, Rogier seems to have had numerous assistants and pupils, for the number of good contemporary copies and versions of his paintings indicates that he ran a busy workshop. His pictures were exported to France, Germany, Spain, and Italy (where he was one of the few northern artists of the time to be highly regarded), and many of the types and motifs he invented or popularized became part of the common currency of artistic ideas until well into the 16th century (see donor, for example). However, although his work was revered, knowledge of the man himself quickly faded, so much so that in van Mander's biographies he is inadvertently split into two artists: Rogier van der Weyden and Rogier of Bruges. After the destruction of his most conspicuous works in Brussels in 1695, he was virtually forgotten. Interest in him revived in the mid-19th century, but it was not until the 20th century that he took his place among the greatest European painters.