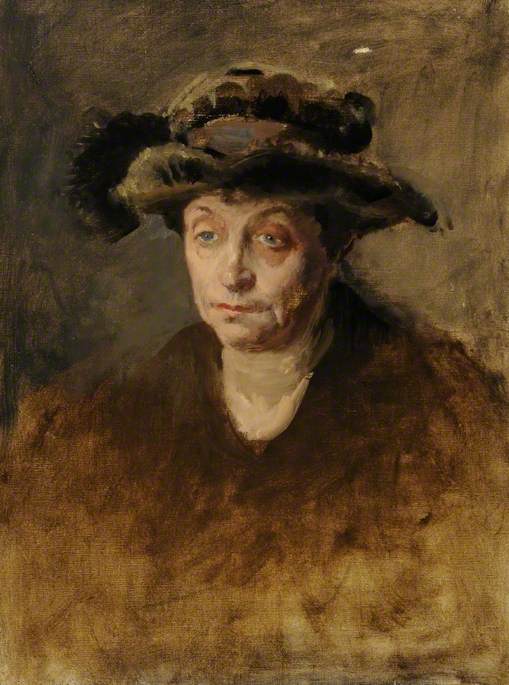 Portrait of a Woman in a Feathered Hat

(b Solihull, Warwickshire, 9 Apr. 1862; d London, 8 Jan. 1937). British painter, draughtsman, and teacher. He was interested in art from childhood, and in 1893 he abandoned his successful medical career to become a teacher at the Slade School. (However, he worked in plastic surgery during the First World War.) Tonks remained at the Slade until 1930 (as professor from 1918), and became the most renowned and formidable teacher of his generation—‘in appearance tall, gaunt, and severe’ (DNB). Under him the Slade maintained its position as the dominant art school in Britain (although it was now challenged by the Royal College of Art), and he was a major influence as an upholder of traditional values and an opponent of modern ideas: ‘I don't believe I really like any modern development.

Read more
’ He set high standards for his pupils, particularly in draughtsmanship (his own forte) and he got on well with them, in spite of being notorious for his sarcasm and abruptness. Because of his refusal to move with the times he was increasingly looked on as a back number by more progressive artists and students, but he remained a dominant presence in the art world. Tonks's own paintings are mainly figure subjects, often consciously (or self-consciously) poetic in spirit: Sir John Rothenstein refers to ‘the sheer prettiness of much of his art’, but his pictures often look rather laborious, partly because of his technique of ‘Tonking’, which involved using an absorbent material to soak excess oil from the canvas after each day's work and so produce a dry surface for the next session. His best-known work is probably Saturday Night in The Vale (1928–9, Tate, London), which shows the novelist and critic George Moore reading aloud to a gathering at Tonks's studio in The Vale, Chelsea. Moore complained that he had been made to look like a ‘flabby old cook’, whereas Tonks had depicted himself as a young and elegant ‘demi-god’.