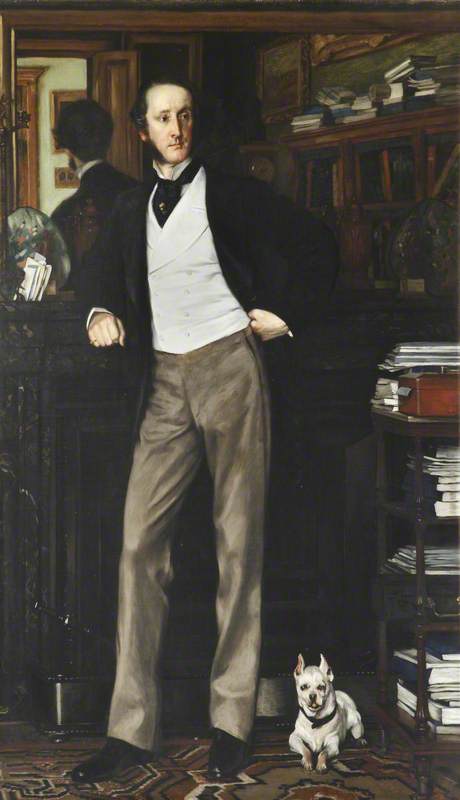 (b Nantes, 15 Oct. 1836; d Château de Buillon, nr. Besançon, 8 Aug. 1902). French painter, illustrator, and printmaker. Originally he was called Jean-Jacques, but he took the name James as an expression of his Anglophilia. Early in his career he painted historical costume pieces, but in about 1864 he turned with great success to scenes of contemporary life, usually involving stylish women. Following his alleged involvement in the turbulent events of the Paris Commune (1871) he moved to London, where he lived from 1871 to 1882. He was just as successful there as he had been in Paris and lived in some style in fashionable St John's Wood: in 1874 Edmond de Goncourt wrote sarcastically that he had ‘a studio with a waiting room where, at all times, there is iced champagne at the disposal of visitors, and around the studio, a garden where, all day long, one can see a footman in silk stockings brushing and shining the shrubbery leaves’.

Read more
His pictures are distinguished most obviously by his love of painting women's costumes: indeed, his work—which has a fashion-plate elegance and a chocolate-box charm—was at one time more often reproduced in books on the history of dress than on the history of art. He also, however, had a gift for wittily observing nuances of social behaviour. In 1882, following the death of his mistress Kathleen Newton (the archetypal Tissot model—beautiful but rather vacant), he returned to France, and in 1885 he experienced a religious conversion when he went into a church to ‘catch the atmosphere for a picture’. Thereafter he devoted himself to religious subjects: he visited the Holy Land in 1886–7 and 1889, and his illustrations to the Bible were enormously popular, both in book form and when the original drawings were exhibited. For many years after his death Tissot was generally dismissed as vulgar and superficial, but since the 1970s there has been an upsurge of interest in him, expressed in saleroom prices for his work as well as in numerous books and exhibitions devoted to him.