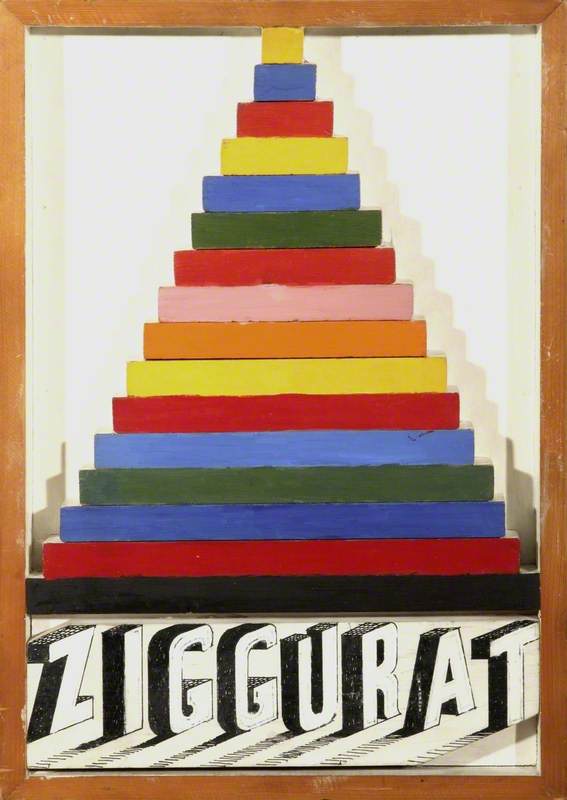 British painter, sculptor, and printmaker, born in London. After working as a carpenter and cabinet-maker, 1944–6, and serving with the RAF, 1946–9, he studied at *St Martin's School of Art, 1949–52, and at the *Royal College of Art, 1952–5. He won the Rome Prize in 1955 and spent three years in Italy and Spain, then taught at St Martin's, 1958–63 (he has also been guest lecturer at various universities in Britain and abroad). In the 1960s Tilson was associated with *Pop art, his most characteristic works being brightly coloured wooden reliefs that included words or lettering among the pictorial symbols (9 Elements, 1963, Scottish NG of Modern Art, Edinburgh). An inventive graphic artist, he has worked in various printmaking techniques, including etching, screenprinting, and woodcut.

Artist's website
Biography on Oxford Index
Mixed media artist who was born in London and who first worked as a cabinet maker and carpenter, 1944-46. Following National Service with the RAF, 1946-49, he entered St. Martin's School of Art, 1949-52 and furthered his studies at the RCA, 1952-55. He was a winner of the Rome Scholarship in 1956 and became associated with the Pop Art movement, chiefly through Young Contemporaries exhibitions. In 1961 he held his first solo exhibition at the new London gallery of Marlborough Fine Art and has since exhibited with them in London, New York and throughout Europe. He also exhibited alongside Elisabeth Frink and Henry Moore at the Marjorie Parr Gallery.

From 1958 to 1963 Tilson taught at St. Martin's School of Art, London and held a similar post at the Slade School, London, and at King's College in the University of Durham, Newcastle upon Tyne, 1962-63 and at Walthamstow School of Art. In 1984 he was awarded a prize in the Bradford International Print Biennale and the Grand Prix at the Zjubljana Biennale in 1985. He was elected RA in 1991 and has work in many public collections, including the Walker Art Gallery, Liverpool, Bolton Art Gallery, Pallant House Gallery, Chichester and Tate Gallery. He divides his time between studios in England and in Cortona, Italy.