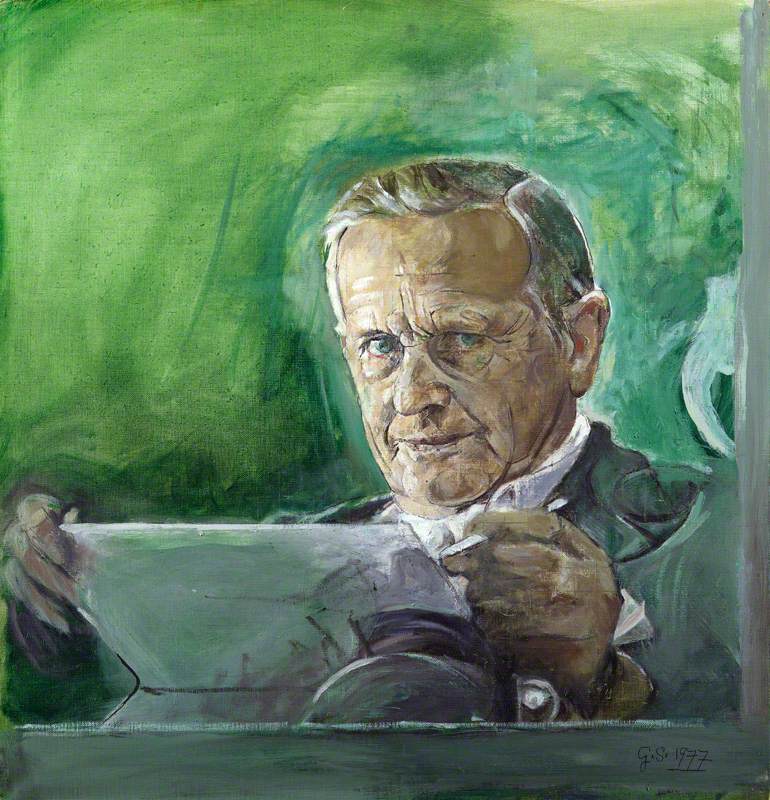 (b London, 24 Aug. 1903; d London, 17 Feb. 1980). British painter, printmaker, and designer. He abandoned an apprenticeship as a railway engineer to study engraving and etching, 1921–6, and up to 1930 worked exclusively as a printmaker. His etchings of this period are in the Romantic and visionary tradition of Samuel Palmer. In the early 1930s he began experimenting with oils (following a decline in the market for prints), and by 1935 he had turned mainly to painting. His paintings of the 1930s show a highly subjective response to nature, inspired mainly by visits to Pembrokeshire. He had a vivid gift of visual metaphor and his landscapes are not topographical, but semi-abstract patterns of haunting and monstrous shapes rendered in his distinctively acidic colouring (Entrance to a Lane, 1939, Tate, London).

Read more
From 1940 to 1945 he was employed as an Official War Artist, mainly recording the effects of bombing; his poignant pictures of shattered buildings are among the most famous images of the home front. Soon after the war he took up religious painting, with a Crucifixion (1946) for St Matthew's, Northampton (he received the commission at the dedication of Henry Moore's Madonna and Child in this church), and also portraiture, with Somerset Maugham (1949, Tate). It was in these two fields that he chiefly made his mark in his later career. The Maugham portrait has an almost caricature quality (Maugham's friend Sir Gerald Kelly said it made him look ‘like an old Chinese madam in a brothel in Shanghai’), and his most famous portrait, that of Winston Churchill (1954), was so hated by the sitter (who thought it made him look ‘half-witted’) that Lady Churchill destroyed it. Sutherland's most celebrated work, however, has become widely popular—it is the immense tapestry of Christ in Glory (completed 1962) in Coventry Cathedral. In addition to such figure subjects, Sutherland continued to paint landscapes—many of them inspired by the French Riviera, where he lived for part of every year from 1947—and late in his career he returned to printmaking, producing coloured lithographs. Apart from paintings and prints, his work included ceramics and designing posters and stage costumes and decor. He was one of the most famous British artists of the 20th century and received many honours, notably the Order of Merit in 1960. His reputation was high abroad; indeed in his later career he was probably more admired by foreign than by British critics, who tended to find his work old-fashioned. See also Neo-Romanticism.

Painter, born Streatham, London. Originally intended for a career in engineering, in 1920 he was apprenticed at the Midland Railway Works at Derby. Soon after he ;eft and went on to study at Goldsmiths', 1921-26, where he specialised in etching in a style indebted to Samuel Palmer and in 1925 he was elected a member of the Royal Society of Painter-Printmakers. The sudden collapse of the print market after the Wall Street Crash in 1929 obliged him to earn money by designing posters, china, glass and fabric and about this time he also took up painting. In 1934 Sutherland made his first visit to Pembrokeshire which he revisited every summer until the outbreak of World War II. There, his earlier interest in Samuel Palmer combined with his sense of 'encompassing disquiet' to produce visionary drawings and paintings that had an important influence on the neo-romantic artists at the 1940's. About this time he entered a Surrealist phase and in 1936 he exhibited in the International Surrealist Exhibition in London.

During the war he worked as an Official War Artist, drawing scenes of devastation, blast furnaces, tin mining and quarrying. After the war he spent part of each year in the South of France which affected his appreciation of colour. In 1952 he was commissioned to design a vast tapestry for the new Coventry Cathedral that had been destroyed in the enemy bombing. He also began to paint portraits these further enhanced his reputation which, in Britain, was at its height in the 1950's. His most famous portraits were Somerset Maugham, 1949 and a few years later his painting of Winston Churchill, 1954. Grossly disliked by the family it was destroyed on the instructions of Clementine Churchill although several studies have survived.

Sutherland exhibited in the British Pavilion at the Venice Biennale in 1952 and there were major retrospective exhibitions at the ICA in 1951, the Tate Gallery in 1982, the Musée Picasso, Antibes, France in 1998, and the Dulwich Picture Gallery in 2005. A major exhibition of rarely seen works on paper by Sutherland, was held at MoMa, Oxford in 2011. He was awarded the Order of Merit in 1960.