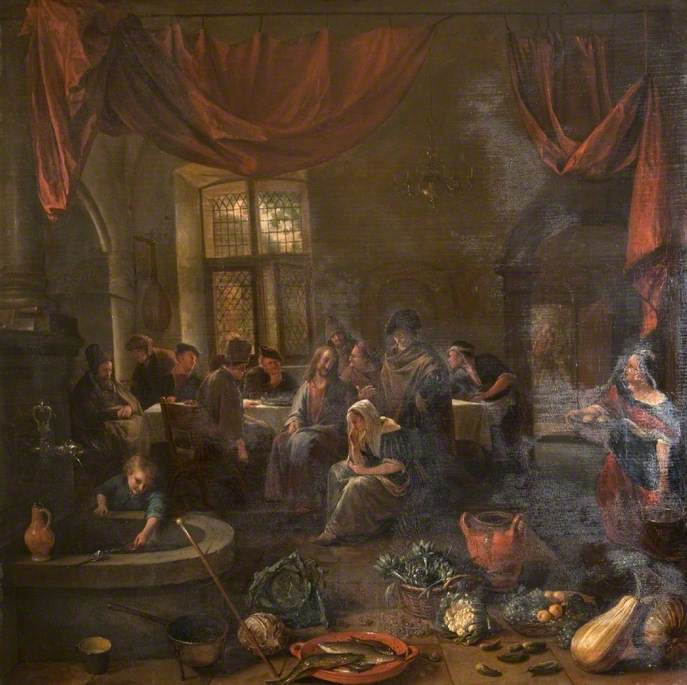 Christ in the House of Martha and Mary

(b Leiden, 1625/6; bur. Leiden, 3 Feb. 1679). Dutch painter. He is best known for his humorous genre scenes, warm-hearted and animated works in which he treats life as a vast comedy of manners. In Holland he ranks next to Rembrandt, Vermeer, and Hals in popularity and the expression a ‘Jan Steen household’ has become part of the Dutch language to describe the kind of lively, untidy home depicted in so many of his paintings. According to Houbraken, Steen's ‘paintings are like his way of life and his way of life like his paintings’, and in his biography he concentrates on the ‘buffoonery’ of his work. This, however, gives a misleadingly one-sided view of Steen, for he has many other facets. He painted portraits, historical, mythological, and religious subjects (he was a Catholic), and the animals, birds, and still-life details in his pictures rival those by any of his specialist contemporaries.

Read more
As a painter of children he was unsurpassed. Moreover, even his most comic paintings often have a serious underlying theme, as he points out human folly or frailty—his favourite topics include various forms of immoderation, such as excessive drinking, squandering money, or giving way to lust or anger (in many of his pictures he includes inscriptions that explain or underline the meaning). Although he was born and died in Leiden, Steen moved around a good deal and spent much of his career in The Hague and Haarlem. He is said to have studied successively with the history painter Nicolaus Knüpfer (1603–55) in Utrecht, with Adriaen van Ostade in Haarlem, and with Jan van Goyen (whose daughter he married) in The Hague. Although he was highly prolific (about 800 paintings are attributed to him), he often had difficulty earning a living and at his death his widow (his second wife) was left with a large family and heavy debts. His financial problems were caused partly by a series of wars against England (and later France), 1652–78, which had a ruinous effect on the Dutch economy in general and the art market in particular. In 1654 his father, a brewer, set him up in a brewery in Delft, but the venture was unsuccessful, and in 1672 he opened a tavern in Leiden, although he continued to paint. Because of these beery connections, Steen is seen in the popular imagination as a drunken profligate, but there is nothing in the known facts of his life to justify this reputation; many of his pictures are indeed set in taverns, but he also painted scenes of impeccable genteelness, and he must have been a dedicated worker to produce his large output in a fairly short career. His work is uneven, but at its best is remarkable for sheer beauty of technique, as well as for richness of characterization and inventiveness in composition. Reynolds praised his ‘strong and manly’ brushwork, and his deftness of touch is sometimes reminiscent of Hals, although Steen's handling is more detailed. As a colourist he was one of the subtlest artists of his time, his use of rose, salmon-red, pale yellow, dove grey, and blue-green being highly distinctive. He had no recorded pupils, but his work was much imitated.