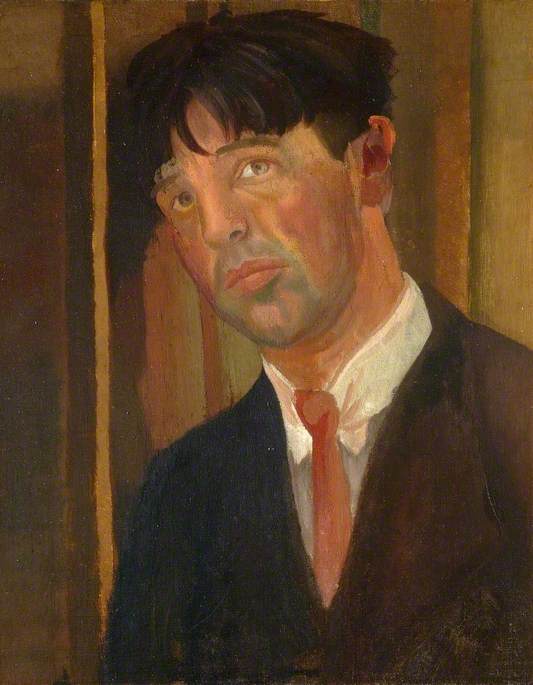 (b Cookham, Berkshire, 30 June 1891; d Taplow, nr. Cookham, 14 Dec. 1959). English painter, one of the most original figures in 20th-century British art. He lived for most of his life in his native village of Cookham, which played a large part in the imagery of his paintings. His education was fairly elementary, but he grew up in a family in which literature, music, and religion were dominant concerns and his imaginative life was extremely rich. He said he wanted ‘to take the inmost of one's wishes, the most varied religious feelings…and to make it an ordinary fact of the street’, and he is best known for pictures in which he set biblical events in his own village; his visionary attitude has been compared to that of William Blake. Spencer was a prize-winning student at the Slade School (1908–12) and served in the army from 1915 to 1918, first at the Beaufort War Hospital in Bristol, then in Macedonia.

Read more
He was appointed an Official War Artist in 1918, but his experiences during the war found their most memorable expression a decade later when he painted a series of murals for the Sandham Memorial Chapel at Burghclere in Hampshire (1927–32), built to commemorate a soldier who had died from an illness contracted in Macedonia. The arrangement of the murals consciously recalls Giotto's Arena Chapel in Padua, but Spencer painted in oil, not fresco, and he concentrated not on great events, but on the life of the common soldier, which he depicted with deep human feeling. There is no violence, and Spencer said that the idea for one of the scenes—The Dug-Out—occurred to him ‘in thinking how marvellous it would be if one morning, when we came out of our dug-outs, we found that somehow everything was peace and the war was no more’. By this time Spencer was a celebrated figure, his greatest public success having been The Resurrection: Cookham (1924–6, Tate, London), which when exhibited in 1927 was hailed by the critic of The Times as ‘the most important picture painted by any English artist in the present century’. He continued: ‘What makes it so astonishing is the combination in it of careful detail with modern freedom of form. It is as if a Pre-Raphaelite had shaken hands with a Cubist.’Spencer was again an Official War Artist during the Second World War, when he painted a series of large canvases showing shipbuilding on the Clyde (Imperial War Mus., London) that memorably capture the heroic teamwork that went into the war effort. His career culminated in a knighthood in the year of his death, but his life was not a smooth success story, and in the 1930s he somewhat alienated his public with the expressive distortions and erotic content of his work. In 1935 he resigned as an Associate of the Royal Academy when two of his pictures, considered caricature-like and poorly drawn, were rejected for the annual summer exhibition, but he rejoined the Academy in 1950. In 1937 he divorced his first wife, the painter Hilda Carline (1889–1950), and married Patricia Preece (1900–71), also a painter, but Hilda continued to play a large part in his life: he painted pictures in memory of her and even wrote letters to her after her death. Some of his nude paintings of Patricia vividly express not only the sexual tensions of his life, but also his belief in the sanctity of human love: the best known is the double nude portrait of himself and Patricia known as The Leg of Mutton Nude (1937, Tate). In his later years Spencer acquired a reputation as a landscapist as well as a figure painter. He also occasionally did portraits. There is a gallery devoted to Spencer at Cookham, containing not only paintings, but also memorabilia such as the pram that this eccentric figure used for pushing his painting equipment around the village. His younger brother Gilbert Spencer (1892–1979) was also a painter of imaginative subjects and landscapes, working in a style close to that of Stanley.