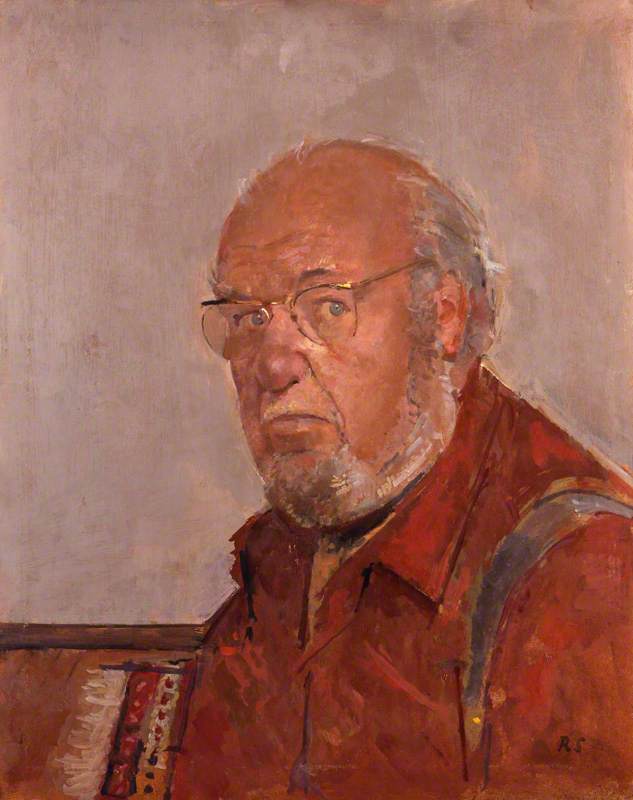 British painter, born in Hammersmith, London, the son of a coach-painter. He studied at Hammersmith School of Art, 1926–30, and the *Royal College of Art, 1931–4, and subsequently taught at various art schools, notably the RCA, where he was a tutor from 1948 to 1977. During the Second World War (when he was exempt from military service because of the after-effects of childhood polio) he took part in the ‘Recording Britain’ scheme (at this time he also played in various bands—he was an accomplished jazz pianist). Spear was best known for his portraits (including many of celebrities) and landscapes, especially views of Hammersmith: in the introduction to the catalogue of Spear's retrospective exhibition at the Royal Academy in 1980, his friend the painter Robert Buhler (1916–89) remarked that ‘one could say that Ruskin Spear has done for Hammersmith what *Sickert did for Camden Town’.

Read more
Characteristically his pictures are broadly brushed, with a spontaneous, improvisatory look. Less typical works include an altarpiece (the Annunciation) for the church of St Clement Danes, London (1958), replacing one destroyed in the Second World War, and murals for the liner Canberra (1959). Like Sickert, he sometimes worked from news photographs. This tends to make many of his portraits meditations on the public image of his subjects, most famously in his painting of the Prime Minister Harold Wilson (1974, NPG, London), in which he is seen wreathed mysteriously by pipe smoke. Appropriately no modern Prime Minister has been so subject to rumour. Further Reading J. Jones, ‘Harold Wilson, Ruskin Spear’, The Guardian (2 June 2001)