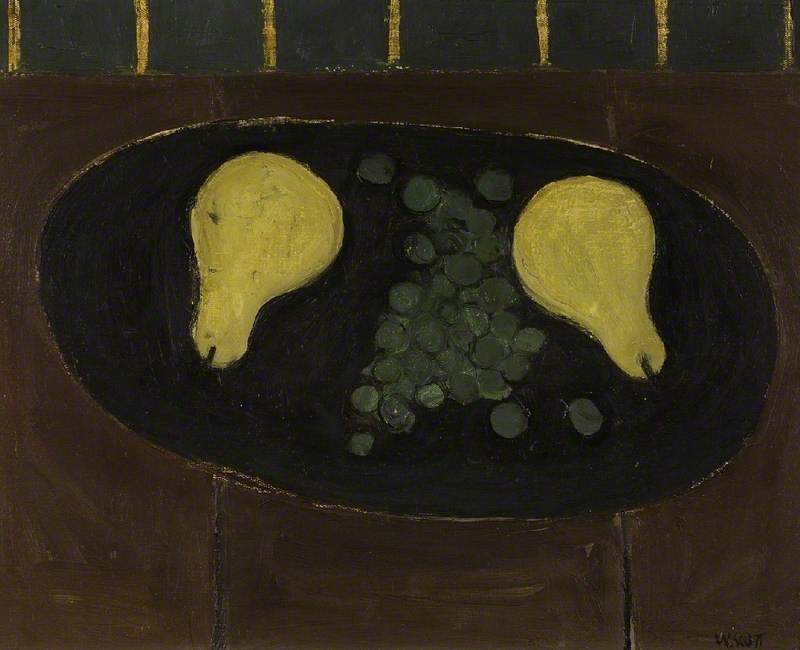 British painter. He was born at Greenock, Scotland, of Irish and Scottish parents and was brought up in Ulster. He studied at Belfast College of Art, 1928–31, and the *Royal Academy, 1931–5. In 1937–9 he lived in France (mainly Pont-Aven and St-Tropez) and he found a sense of kinship with a tradition of French still-life painting which linked Chardin in the 18th century with *Braque. His work continued to be based on still-life, but even when, for a time in the 1950s, he painted pure abstracts, he continued to relate what he did as a painter to that tradition. They featured forms such as circles and squares, but they were not geometrically exact and were bounded by sensitive painterly lines. In the late 1960s and 1970s his style became more austere.

Read more
Although his work was restricted in range and undemonstrative in character, Scott came to be regarded as one of the leading British artists of his generation. He won several awards, including first prize at the 1959 *John Moores Liverpool Exhibition. His work is represented in Tate and many other collections in Britain and elsewhere, and there is a large mural by him in Altnagelvin Hospital, Londonderry (1958–61). He lived mainly in London and Somerset. Further Reading N. Lynton, William Scott (2007)

Artist's website
Oxford Dictionary of National Biography
Biography on Oxford Art Online
Biography on Oxford Index
Painter and printmaker born in Greenock, Scotland but as a child moved to Enniskillen, Northern Ireland in 1924. He attended Belfast College of Art, 1928-31 and at the RA Schools, 1931-35. In 1937 Bill Scott travelled and lived in France where he assisted in the running of an art school in Pont-Aven, Brittany. During World War II he served with the Royal Engineers and held his first solo exhibition at the Leger Galleries in 1942. Scott taught at Bath Academy, Corsham 1946-56 where he met many of the St. Ives artist such as Roger Hilton, Terry Frost, Peter Lanyon, Bryan Winter and Patrick Heron. With most of them he became associated with the Constructionism movement of the 1950's. He went on to teach at the RCA and travelled and taught in America and Canada. His paintings of still lifes in the late 1940’s and early 1950’s led on to an experimentation with pure abstract painting. This was later discarded for an arrangement of simple minimalist shapes on a flat ground which are somewhat reminiscent of pots, pans and other household items.

Scott represented Britain in the Venice Biennale, 1958 and in 1959 he was awarded first prize at the 2nd John Moores Liverpool Exhibition. From 1963-65 he held the position of Ford Foundation artist-in-residence in Berlin, he was appointed CBE in 1966 and in 1977 he was elected an Associate of the RA and a full member in 1984. Museums and collections around the world have examples of his work. These include the Brighton and Hove Museums and Art Galleries, Dublin City Gallery, Fitzwilliam Museum, Irish Museum of Modern Art, Jerwood Foundation, Lancaster University Art Gallery, Leicestershire County Council, Scottish National Gallery of Modern Art, Tate Gallery, Towner Art Gallery, Trinity College, Dublin, Ulster Museum, where he was given a retrospective in 1972 and the Victoria Art Gallery and the Guggenheim Museum, New York.