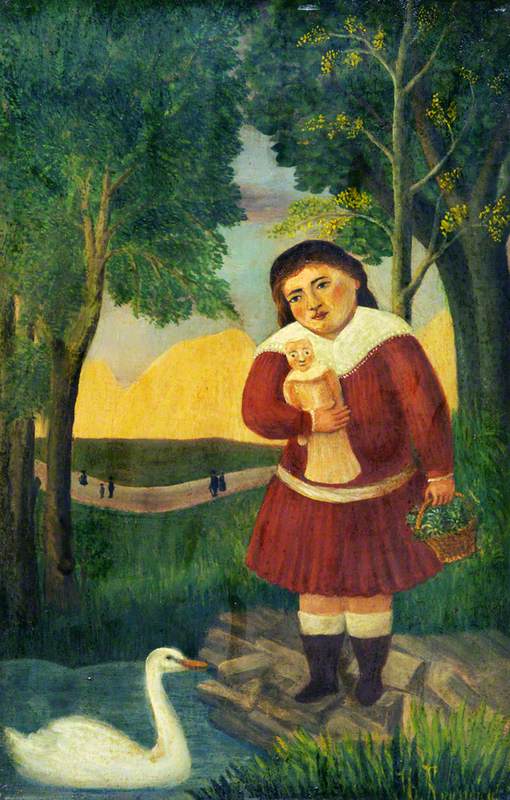 Child with a Doll in a Landscape

(b Laval, 21 May 1844; d Paris, 2 Sept. 1910). French painter, the most celebrated of naive artists. His nickname refers to the job he held with the Paris municipal toll-collecting service (1871–93), although he never actually rose to the rank of Douanier (customs officer). Before this he had served in the army, and he later claimed to have seen service in Mexico, but this story seems to be a product of his imagination. He began to paint as a hobby, self-taught, when he was about 40, and from 1886 he exhibited regularly at the Salon des Indépendants. In 1893 he took early retirement so he could devote himself to art. His character was extraordinarily ingenuous and he suffered much ridicule (although he sometimes interpreted sarcastic remarks literally and took them as praise) as well as enduring great poverty.

Read more
However, his faith in his own abilities never wavered. He tried to paint in the academic manner of such traditionalist artists as Bouguereau and Gérôme, but it was the innocence and charm of his work that won him the admiration of the avant-garde. He was ‘discovered’ by Vollard and members of his circle in about 1906–7, and in 1908 Picasso gave a banquet—half serious, half burlesque—in his honour. Rousseau is now best known for his jungle scenes, the first of which was Tiger in a Tropical Storm (Surprised!) (1891, NG, London) and the last The Dream (1910, MoMA, New York). These two paintings are works of great imaginative power, in which he showed his extraordinary ability to retain the utter freshness of his vision even when working on a large scale and with loving attention to detail. He claimed such scenes were inspired by his experiences in Mexico, but in fact his sources were illustrated books and visits to the zoo and botanical gardens in Paris. His other work ranges from the jaunty humour of The Football Players (1908, Philadelphia Mus. of Art) to the mesmeric, eerie beauty of The Sleeping Gypsy (1897, MoMA). Rousseau was buried in a pauper's grave, but his greatness began to be widely acknowledged soon after his death.