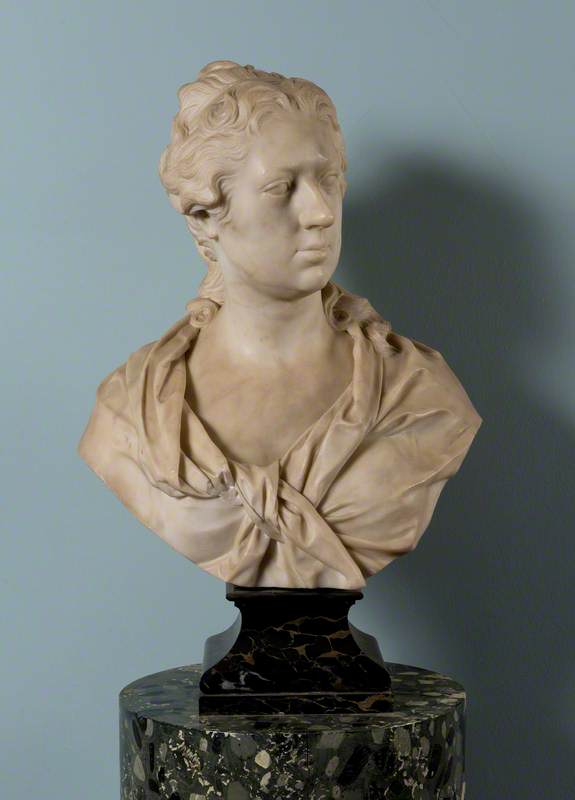 (b Lyons, 31 Aug. 1702; d London, 11 Jan. 1762). French-born sculptor, active in England for virtually his entire career. Little is known of his life before he settled in London in 1730, although he is said to have trained under Balthasar Permoser in Dresden and Nicolas Coustou in Paris. He made his reputation with a full-length seated marble statue of the composer Handel (1738, V&A, London), remarkable for its lively informality, and soon became recognized as the most brilliant portrait sculptor of the day. His busts have great vivacity, stressing small forms and rippling movement in a manner very different from the broader treatment of his contemporary Michael Rysbrack. He was especially successful with portraits of old and ugly men, and in his series of busts at Trinity College, Cambridge, and the celebrated statue of Newton (1754–5) there, he showed an unusual gift for producing lively portraits of men long dead.

Read more
From the mid-1740s Roubiliac also worked as a tomb sculptor, and in this field too he was outstanding. There are several notable examples in Westminster Abbey, including the wonderfully dramatic tomb of Lady Elizabeth Nightingale (1758–61), who is shown being attacked with a spear by Death (a hideous skeleton emerging from a vault), while her husband vainly tries to keep him at bay (the skeleton was carved by Roubiliac's assistant Nicholas Read (c.1733–87). The Nightingale monument clearly shows the influence of Bernini, whose work deeply impressed Roubiliac when he visited Rome in 1752: he said that compared with Bernini's, his own sculptures looked ‘meagre and starved, as if made of nothing but tobacco pipes’. Roubiliac was a genial and cultivated man, widely admired by his contemporaries (in spite of which he died in debt). His reputation declined in the 19th century, but he is now generally regarded as one of the greatest sculptors ever to work in England, certainly the greatest of his period. He had a vivid imagination, he was a superb craftsman, and, as Gerald Randall observes (Church Furnishing and Decoration in England and Wales, 1980), ‘Unlike even the best of his rivals, Roubiliac seems to have been incapable of indifferent work, and even his most modest commissions are designed and executed with a master's touch.’