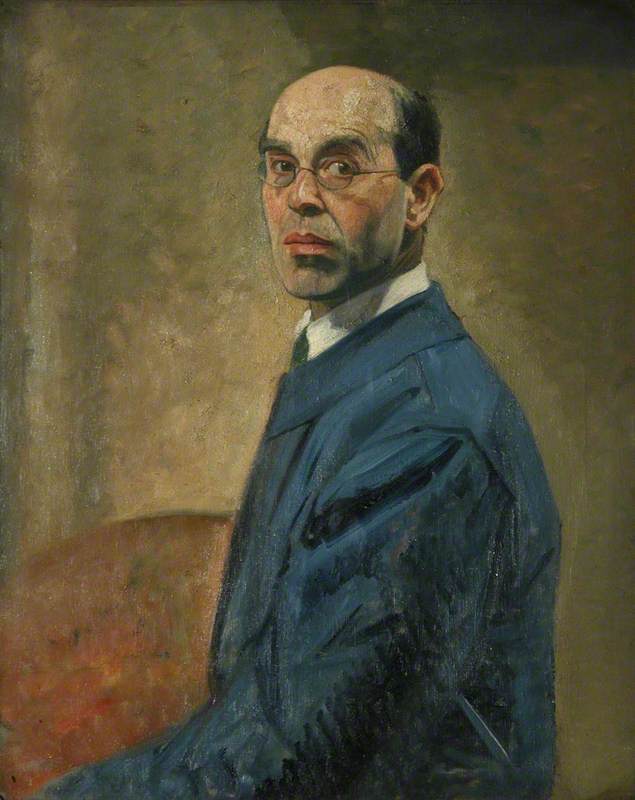 (b Bradford, 29 Jan. 1872; d Far Oakridge, nr. Stroud, Gloucestershire, 14 Feb. 1945). British painter, printmaker, draughtsman, writer, and teacher. He studied for a year at the Slade School (1888–9) under Alphonse Legros and afterwards at the Académie Julian in Paris. There he was encouraged by Degas and Pissarro, and he was also friendly with Whistler. His best works are generally thought to be his early Whistlerian paintings such as The Doll's House (1899, Tate, London), which shows Augustus John and Rothenstein's wife as characters in a tense scene from Ibsen's play A Doll's House. From about 1898, however, he specialized in portraits of the celebrated and those who later became celebrated. In his later career he was much more renowned as a teacher than a painter.

Read more
His outlook was conservative (he regarded pure abstraction as ‘a cardinal heresy’) and as principal of the Royal College of Art, 1920–35, he exercised an influence second only to that of Tonks at the Slade School in earlier decades. His books included three volumes of memoirs (1931–9). His brother Albert (1881–1953) was a painter, designer, and prolific book illustrator. In 1914 he changed his surname to Rutherston because of anti-German feeling. William's son, Sir John Rothenstein (1901–92), had a distinguished career as an art historian (he was director of the Tate Gallery, 1938–64, and wrote numerous books); another son, Michael Rothenstein (1908–93), was a painter, printmaker, and writer on art.

Oxford Dictionary of National Biography
Biography on Oxford Art Online
William Rothenstein was born into a Jewish family in Bradford, West Yorkshire and studied at the Slade School of Art (his teachers included Alphonse Legros) and in Paris, where he met and was encouraged by James McNeill Whistler and Edgar Degas. He was a friend of caricaturist and parodist Max Beerbohm. Rothenstein became known for his portrait drawings of famous individuals and was an official war artist in both World War I and World War II. He was a member of the International Society of Sculptors, Painters & Gravers.

Rothenstein maintained a lifelong fascination for Indian sculpture and painting, and in 1910 set out on a seminal tour of the Subcontinent's major artistic and religious sites. This began with a visit to the ancient Buddhist caves of Ajanta, where he observed Lady Christiana Herringham and Nandalal Bose making watercolor copies of the ancient frescoes; and ended with a stay in Calcutta, where he witnessed the attempts of Abanindranath Tagore to revive the techniques and aesthetics of traditional Indian painting.

Rothenstein was Principal of the Royal College of Art from 1920 to 1935, where he encouraged figures including Jacob Epstein, U Ba Nyan, Henry Moore and Paul Nash. He wrote several books, including English Portraits (1898) and the autobiographical volumes, Men and Memories. He was knighted in 1931.