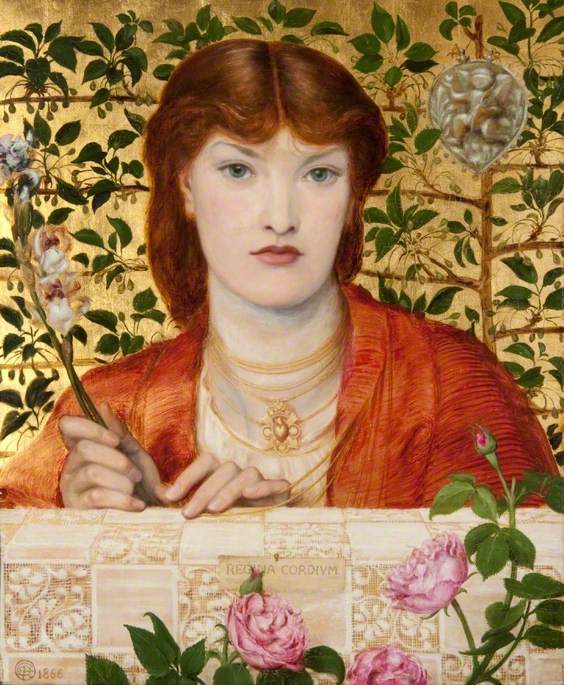 (b London, 12 May 1828; d Birchington, nr. Margate, Kent, 9 Apr. 1882). English painter and poet. He came from a remarkable and talented family: his father was an exiled Italian patriot and Dante scholar, his sister the poet Christina Rossetti, and his brother the critic William Michael Rossetti. Growing up in modest circumstances but a strongly literary environment, he at first found it hard to decide whether he should devote himself to poetry or painting. Although painting became his profession (following the advice given to him by the poet and critic Leigh Hunt: ‘If you paint as well as you write, you may be a rich man’), he continued to write poetry and make translations from the Italian, and he has a secure place in literary history.

Read more
In 1848 he founded the Pre-Raphaelite Brotherhood with Hunt, Millais, and others. His Girlhood of Mary Virgin (1849, Tate, London), the first picture to be exhibited bearing the Brotherhood's initials, was warmly praised and sold well, but the subsequent abuse that the Pre-Raphaelites received hurt him so much that he rarely again exhibited in public. In the 1850s he virtually gave up oils and concentrated on watercolours of medieval subjects. These found ready buyers (often contacts of Ruskin, whom he met in 1854), and Rossetti, who was a hard and skilful businessman, proved Leigh Hunt's prediction true—by the 1860s he was earning the very substantial sum of £3,000 a year.In 1860 Rossetti married the beautiful but sickly Elizabeth Siddal, the archetypal Pre-Raphaelite ‘stunner’, after a long and sometimes vexed liaison. Her melancholy face haunted his imagination, and he portrayed ‘Guggums’ (as he called her) again and again—‘It is like a monomania with him’, wrote Ford Madox Brown in 1855. Rossetti immortalized her mainly in drawings, for in spite of the hatred for academic discipline that made him so disdainful of the official art world, he was an outstanding draughtsman. Elizabeth died from an overdose of laudanum, possibly deliberate, in 1862, and Rossetti was devastated: as a gesture of his grief he had the only complete manuscript of his poems placed in her coffin, but he was persuaded to have them exhumed in 1869 and they were published the following year. Rossetti also painted the intensely spiritual Beata Beatrix (Tate) as a memorial to Elizabeth, expressing his love for her as a parallel to Dante's for Beatrice (the picture is dated 1864, but was worked on over a period of several years). By the time of Elizabeth's death Rossetti had returned to oil painting, and in the last two decades of his life his subject matter was confined almost exclusively to beautiful women, portrayed in a richly sensuous manner and often evoking literary or mythological references. Elizabeth was replaced as his favourite model by William Morris's wife Janey, who became in Rossetti's pictures one of the archetypal femmes fatales—all cascading curls, pouting lips, and smouldering eyes. Rossetti had met Morris and Burne-Jones in 1856 and entered into partnership with them in 1861 (in the decorative arts firm later known as Morris & Co.), but both business and personal relationships became strained: Rossetti was in love with Janey and he and Morris parted acrimoniously in 1875. In his later years Rossetti became an eccentric recluse (he had a menagerie of unusual animals, including a wombat, the death of which occasioned a poem); he fought a losing battle against drugs and alcohol and he died paralysed and prematurely aged. He was nevertheless a commanding personality and his work was highly influential: his romantic medievalism largely inspired the second wave of Pre-Raphaelitism associated with Burne-Jones and other followers, and his femmes fatales appealed to the Symbolists and had a legion of descendants during the turn-of-the-century taste for ‘decadence’.