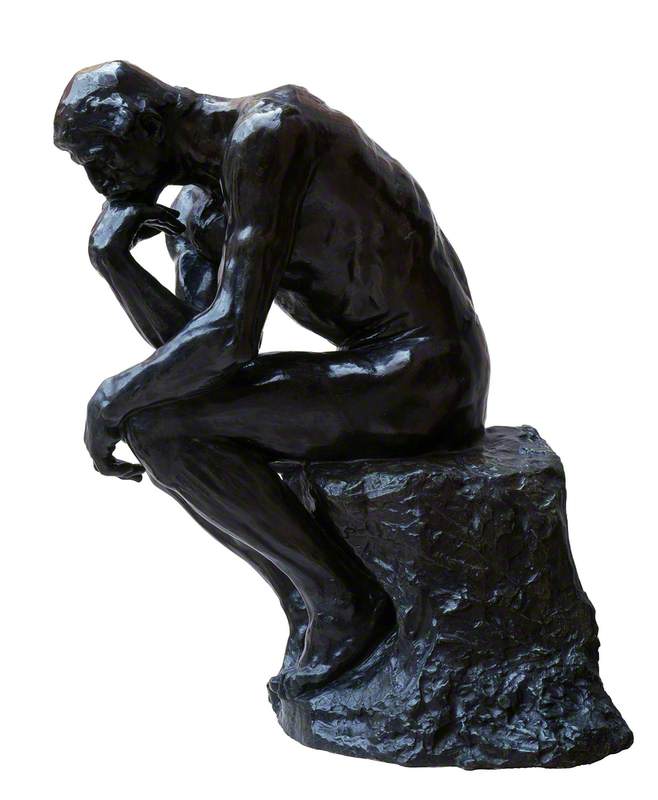 French sculptor and draughtsman, one of the greatest and most influential European artists of his period. He was the first sculptor since the heyday of Neoclassicism to occupy a central position in public attention and he opened up new possibilities for his art in a manner comparable to that of his great contemporaries in painting—Cézanne, Gauguin, and van Gogh. His beginnings, however, were not auspicious: he came from a poor background, was rejected three times by the École des Beaux-Arts, and for many years worked mainly as an ornamental mason.

Read more
In the winter of 1875–6 Rodin visited Italy, where (as he later wrote to Bourdelle) ‘Michelangelo freed me from academism.’ Michelangelo was the inspiration for his first major work, a male nude, The Age of Bronze, which was exhibited at the 1877 Salon. (Like many of Rodin's statues, this exists in several casts; the Musée Rodin in Paris has examples of virtually all his sculptural work, and many of the major pieces are also represented in the Rodin Museum in Philadelphia.) The Age of Bronze caused a sensation because the naturalistic treatment of the naked figure was so different from the idealizing conventions then current—he was even accused of having cast it from a live model.

Three years later, in 1880, his reputation now established, Rodin was commissioned by the state to make a pair of bronze doors for a proposed Musée des Arts Décoratifs—The Gates of Hell (inspired by Dante's Inferno). He never finished the huge work in a definitive way (he worked on it intermittently until 1900 and the museum never came into being in its proposed form), but he poured some of his finest creative energy into it, and many of the nearly 200 figures that are part of it formed the basis of famous independent sculptures, most notably The Kiss and The Thinker. The several casts of the complete structure that exist were made after Rodin's death (the plaster model is in the Musée d'Orsay, Paris). Rodin's overall design is a kind of Romantic reworking of Ghiberti's Gates of Paradise for the Florence Baptistery, the twisted and anguished figures, irregularly arranged, reminiscent of Michelangelo's Last Judgement and of Gustav Doré's illustrations for the Divine Comedy. The modelling is often rough and ‘unfinished’ and anatomical forms are exaggerated or simplified in the cause of intensity of expression.

These traits were taken further in some of Rodin's monuments, beginning with the famous group of The Burghers of Calais (1884–9), commissioned by the city of Calais for a site in front of the town hall (there are several other casts, including one in Victoria Tower Gardens, London). In the figures of the six hostages who face the threat of death, Rodin showed a variety of responses—including anguish as well as courage—to an extreme emotional crisis. The civic authorities had wanted something in a more traditional heroic-patriotic vein, and the work was unveiled in 1895 only after years of wrangling.

Even worse hostility was aroused a few years later by Rodin’s statue of Balzac. This was commissioned by the Société des Gens de Lettres in 1891, but the design was so radical—an expression of the elemental power of genius rather than a portrait of an individual—that it was rejected, and the monument was not finally cast and set up until 1939, at the intersection of the boulevards Raspail and Montparnasse in Paris. It ranks as the most original piece of public statuary created in the 19th century, and Brancusi wrote that it was ‘indisputably the starting point of modern sculpture’. Rodin himself described it as ‘the sum of my whole life’.

In spite of the controversy his work caused, by 1900 Rodin was widely regarded as the greatest living sculptor, and in that year a pavilion was devoted to his work at the Paris World Fair. From this point he created no more major monuments, his sculpture consisting mainly of portrait busts, including many of eminent personalities. In his later years he was also a prolific draughtsman, mainly of the female nude, some of the drawings being highly erotic. (He was famed for his voracious sexual appetite, but this was excused as an aspect of his Olympian stature; his lovers included Gwen John and his pupil Camille Claudel (1864–1943).) He left his collection of his own work to the state to found the Musée Rodin in Paris, opened in 1919. His villa at Meudon (now a suburb of Paris) is an outstation of the museum. Rodin is buried in the garden at Meudon, with a cast of The Thinker overlooking his grave.

Although the literary and symbolic significance he attached to his work has been out of keeping with the conception of ‘pure’ sculpture that predominated in the 20th century, Rodin's influence on the development of modern art has been immense, for single-handedly he revived sculpture from a period of relative stagnation when it had lagged behind the momentous achievements of contemporary painters and made it once again a vehicle for intense personal expression. His sense of movement and energy and his use of the partial figure (particularly the torso) as a legitimate subject were among his most potent legacies, inspiring Bourdelle (his long-time assistant) for example.

Just as important as Rodin’s direct influence was the fervent reaction against his dominance among the avant-garde. As George Heard Hamilton writes (Painting and Sculpture in Europe: 1880–1940, 1967), ‘Perhaps the proof of his greatness is to be seen in the work of such men as Maillol, Brancusi, Lipchitz, and others, who had to reject his method and his programme in order to assert their independence. Through the loyal opposition, so to speak, Rodin's inexhaustible energies reach to the present.’