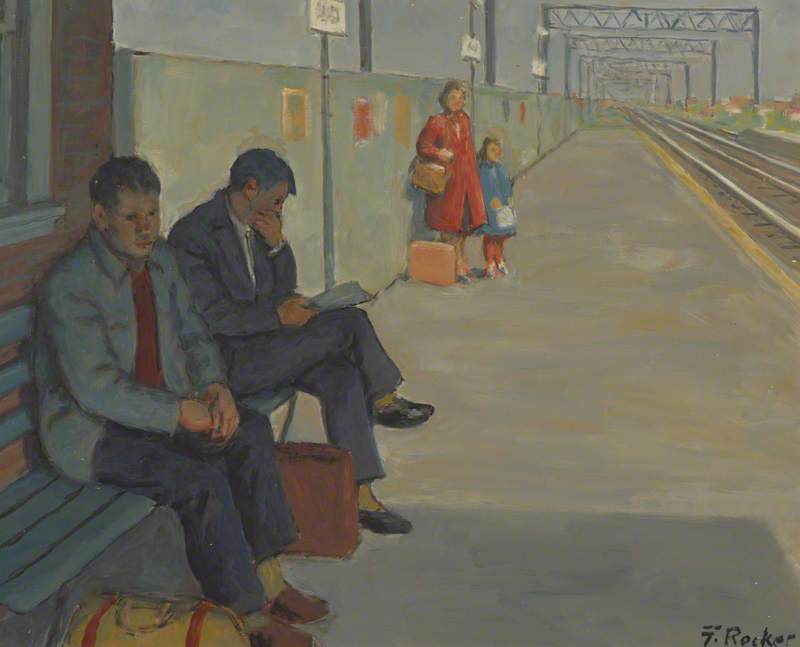 Waiting on the Platform 1980

Artist of the naturalistic school, influenced by American painting of the inter-war years. He was born in London’s East End, son of Rudolph Rocker, editor of the Yiddish anarchist weekly Arbeiter Freind. The Port of London was his first subject, his older half-brother Rudolph his first instructor. At the end of World War I Rocker’s family moved to Germany, where he studied at the Berlin School of Arts and Crafts, then was apprenticed as a lithographer for four years. From 1929 went with his father to America, returning to London in 1972. In America he worked nine years in a New York cartoon studio, then as a freelance including a lot of printmaking. Kennedy Galleries handled much of his output, the Library of Congress collecting examples, the Philadelphia Print Club giving him a prize in 1944.

Read more
In London he showed with Thelma Watt in 1984, then from 1986 with Stephen Bartley Gallery, which gave him a 90th Birthday Tribute in 1998. Simultaneously, Rocker’s autobiography The East End Years – A Stepney Childhood was published. There was a retrospective at The Chambers Gallery in 2004, another in 2005–6.