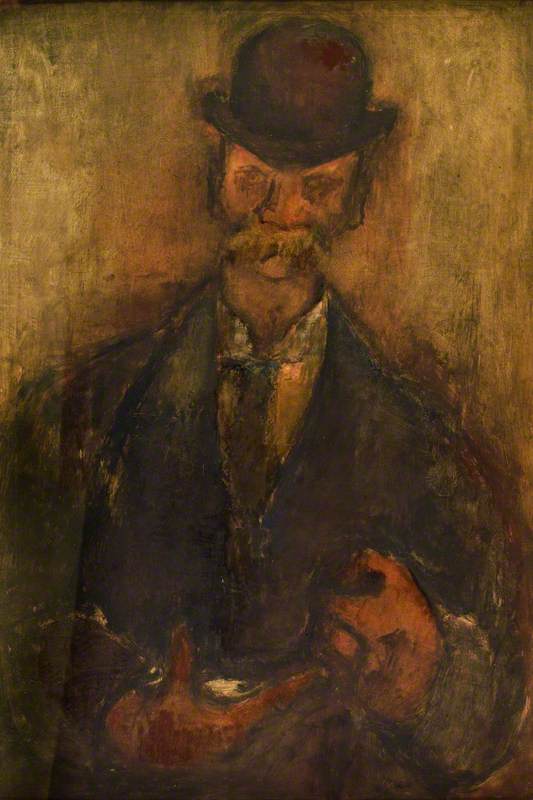 Painter, born in Ruabon, Denbigh-shire, but moved to Neath, Glamorgan, where he continued to live, as a child. He was apprenticed to a watchmaker and jeweller in the town, in the 1930s attending Swansea School of Art part-time. After Royal Air Force service, 1940–6, Roberts became a pupil of Josef Herman, who changed a rather tentative watercolourist to a more Expressionist painter in oils. Roberts also painted alongside Martin Bloch and was influenced by the work of the Belgian Expressionist Constant Permeke when shown in London in 1957. This all resulted in rich and forthright paintings of Neath and its area, plus still lifes and religious pictures. Roberts had his first one-man show with Roland, Browse & Delbanco in 1954, also showing with AIA Gallery, Arnolfini Gallery in Bristol, Howard Roberts Gallery in Cardiff and Tegfryn Art Gallery, Menai Bridge.

Read more
He had a retrospective at Llandaff Festival in 1973 and another at Mostyn Art Gallery, Llandudno, and tour, 1993–4. There was a memorial exhibition at National Library of Wales, Aberystwyth, in 2001, and a major show at John Davies Fine Paintings, Stow-on-the-Wold, in 2005. National Museum of Wales, Cardiff, holds his work.