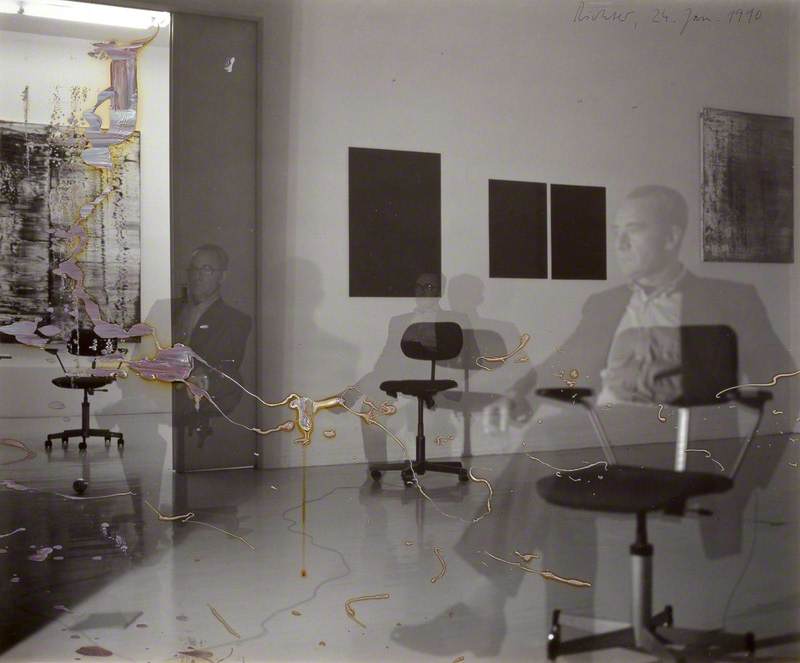 German painter, born in Dresden. After working as an advertisement and stage painter he studied at the Academy in Dresden, 1952–6. In 1961 he moved to West Germany and studied at the Academy in Düsseldorf, 1961–3. He recalled that one of the factors which encouraged him to move was the ‘sheer brazenness’ of the paintings by Pollock and Fontana he saw at the 1959 documenta. In 1963 he participated in an event entitled Manifestation for Capitalist Realism. This was a kind of combination of a Happening and an art exhibition, held in a furniture store. Visitors were given numbers, told to ‘report’ to the address at 8 pm, and instructed to see the work when called in strict rotation. Richter's subsequent report on the event stated that by 8.

Read more
30 the instructions were being ignored and everyone crowded into the room. He had already begun making paintings from found photographs. Unlike most Photorealist paintings, these emphasize the imprecision of photography as a medium rather than its capacity for revealing detail. The Gizeh Sphinx (1964) is taken from a photograph in an old book which appears to have been retouched by hand for reproduction purposes. Combined with the weathering of the sphinx itself over 4,500 years, this produces a strange mixture of exactitude and mystery underlined by the prosaic gesture of including the illustration's original caption. Administration Building (1964) is a blurred image of a gaunt structure, reminiscent of the East Germany he had left. Richter has applied this method to many subjects. In 1975 he made a series of paintings from magazine photographs from blow-ups of an amateur cine film of the death of a tourist who left his car in a safari park and was eaten alive by a lion. The disturbing event becomes distanced by the process and, without knowledge of the story, the images are hard to decipher. The most famous of Richter's paintings of this kind are the series he exhibited in 1989 from photographs of the bodies of members of the Red Army Faction, the German terrorist organization, who had been found hanged in their prison cells. The official story that this was suicide has still not received universal assent, but Richter's paintings of the event are not obviously polemical. The artist summed up his own feelings in an interview by saying, ‘We're always both: the State and the terrorist.’ In the catalogue of the 2007 documenta Kaja Silverman pointed out the visual echoes between the dead terrorists and the tender portrait of his daughter Betty made in 1977, the year of the events commemorated by the artist twelve years later. Richter has described the difference between photography and painting by saying that the former provokes horror and the latter grief. Richter has deliberately avoided being identified too closely with any personal style and has also made abstract paintings. Sometimes these are constructed on a system, as in No 350/1 (1973). This is a grid of 1,024 panels in different tones. The number was chosen by a process of multiplication by four (4×4=16,×4= 64, and so forth). Beyond a certain number of tones the division between one and another would no longer be clear. Each tone is painted just once, but there is an element of randomness. Richter calculated that to use every combination would have taken him over 400 billion years. In other works, he has applied a similar technical virtuosity to abstraction as he has to figuration. In some pictures, paint is scraped across a large canvas to suggest a scratched mirror and produces an effect of a multi-layered surface (St John, 1988, Tate). The difficulty Richter has created for anyone who attempts to pin down his style reflects his attempt to reject any ideology. His interest in the Red Army Faction, he has explained, was not the result of any sympathy with their thinking but with ‘the why and wherefore of an ideology that has such an effect on people’. His outlook may result from his contempt for the rigid artistic system of East Germany where he spent his youth. He described art there as ‘A painting which creates nothing; which simply makes variations on what GDR cultural policy makes available for the purpose—namely the so-called cultural heritage’. Not even a painter such as Werner *Tübke, admired in the West but described by Richter as ‘phoney’, was exempt. The contempt was extended to those artists in West Germany who ‘lurk as parasites’ in the academy. Although Richter himself has worked as a teacher, such an attitude links him to younger German artists such as *Kippenberger who sought to build careers outside the academic framework. Richter's enormous status in the art world may be a result of his technical skill and inventiveness, but it also owes something to the way in which his theory and practice manifest a sense of the limitations of art or ideology to transform society. This accords with a certain contemporary pragmatism; in this respect Richter provides the greatest possible contrast to Germany's previous artistic hero, Joseph *Beuys. For Richter, ‘Art is human only in the absolute refusal to make a statement’. Further Reading G. Richter, The Daily Practice of Painting (1995) Tate Gallery, Gerhard Richter (1990)

Gerhard Richter has long been regarded as one of the greatest artists of our time. Working in a wide range of styles he has created both abstract and realistic paintings, photographs, overpainted photographs and glass sculptures. This film gives us an insight into his works and thinking, as presented by one of Belgium’s most innovative galleries for contemporary art.