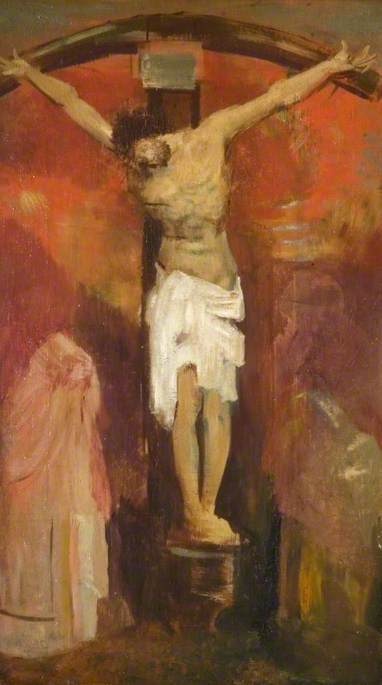 (b Bordeaux, 20 Apr. 1840; d Paris, 6 July 1916). French painter, draughtsman, and printmaker, one of the outstanding figures of Symbolism. He led a retiring life, first in his native Bordeaux, then from 1870 in Paris, and until he was in his fifties he worked almost exclusively in black and white—in charcoal drawings and lithographs. In these he developed a highly distinctive repertoire of weird subjects—strange amoeboid creatures, insects, and plants with human heads and so on, influenced by the writings of Edgar Allen Poe. He remained virtually unknown to the public until the publication of J. K. Huysmans's celebrated novel A rebours in 1884: the book's hero, a disenchanted aristocrat who lives in a private world of perverse delights, collects Redon's drawings, and with his mention in this classic expression of decadence, Redon too became a figurehead of the movement.

Read more
During the 1890s he turned to painting and revealed remarkable powers as a colourist that had previously lain dormant. Much of his early life had been unhappy, but after undergoing a religious crisis in the early 1890s and a serious illness in 1894–5, he was transformed into a much more buoyant and cheerful personality, expressing himself in radiant colours in visionary subjects, flower paintings, and mythological scenes (the Chariot of Apollo was one of his favourite themes). He showed equal facility in oils and pastel and after 1900 he carried out a number of large decorative schemes. His flower pieces, in particular, were much admired by Matisse, and the Surrealists regarded Redon as one of their precursors. By the end of his life he was a distinguished figure, although still a very private person.