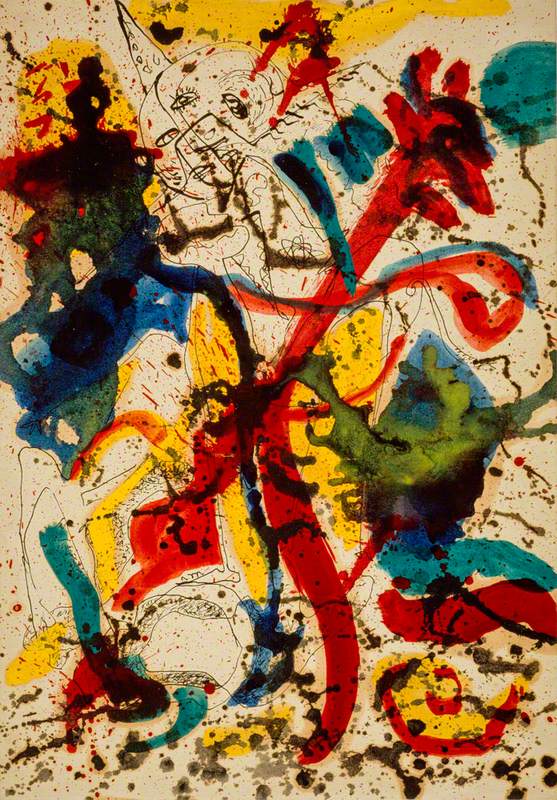 (b Cody, Wyo., 28 Jan. 1912; d East Hampton, Long Island, NY, 11 Aug. 1956). American painter, the commanding figure of the Abstract Expressionist movement. In 1929–31 he studied at the Art Students League of New York under Thomas Hart Benton and was influenced not only by Benton's restlessly energetic style, but also by his image as a virile, hard-drinking macho-man (Pollock began treatment for alcoholism in 1937 and in 1939 he started therapy with Jungian psychoanalysts, using his drawings in sessions with them). During the 1930s he painted in Benton's Regionalist vein, and he was influenced also by the work of the Mexican muralists (he attended an experimental workshop run by Siqueiros in New York in 1936) and by certain aspects of Surrealism, particularly the use of mythical or totemic figures as archetypes of the unconscious.

Read more
From 1935 to 1942 he worked for the Federal Art Project, and in 1943 he was given a contract by Peggy Guggenheim; his first one-man show was held at her Art of This Century gallery in that year. A characteristic work of this time is The She-Wolf (1943, MoMA, New York), a semi-abstract picture with vehemently handled paint and ominous imagery recalling the monstrous creatures of Picasso's Guernica period. By the mid-1940s Pollock's work had become completely abstract, and the ‘drip and splash’ type of Action Painting for which he is best known emerged in 1947. Instead of using the traditional easel, he laid his canvas on the floor and poured and dripped his paint from a can (using commercial enamels and metallic paint because their texture was better suited to the technique); instead of using brushes, he manipulated the paint with ‘sticks, trowels or knives’ (to use his own words), sometimes obtaining textured effects by the admixture of ‘sand, broken glass or other foreign matter’. As he worked, Pollock moved around (and sometimes through) his paintings, creating a novel all-over style that avoided any points of emphasis and abandoned traditional ideas of composition: the design of the painting had no relation to the size or shape of the canvas—indeed in the finished work the canvas was sometimes docked or trimmed to suit the image. The drip paintings were first publicly shown at Betty Parsons's New York gallery in 1948. Initially they shocked most observers, but some people were stunned by their energy and passion, which opened up new paths for painting: Willem de Kooning commented, ‘Jackson's broken the ice.’Pollock's drip period lasted only from 1947 to 1952 (afterwards he went back to quasi-figurative work), but it is on the paintings of these five years that his enormous reputation rests. Among the most celebrated are Autumn Rhythm (1950, Met. Mus., New York) and Lavender Mist (1950, NG, Washington), which Robert Hughes describes as ‘his most ravishingly atmospheric painting’. Pollock's novel methods gave rise to a good deal of mockery (he was nicknamed ‘Jack the Dripper’), but he was supported by advanced critics, particularly Clement Greenberg and Harold Rosenberg, and as early as 1949 the French painter Georges Mathieu said that he considered him the ‘greatest living American painter’. By 1960 he was generally recognized as the most important figure in the most important movement in the history of American painting, but a movement from which artists were already in reaction. His unhappy personal life and his premature death in a car crash contributed to his status as one of the legends of modern art: he was the first American painter to become a ‘star’.In 1945 Pollock married Lee Krasner (1908–84), who was an Abstract Expressionist painter of some distinction, although it was only after her husband's death that she received serious critical recognition. She was also an important source of encouragement and support to Pollock, whose attitude to his work fluctuated from supreme confidence to dismal uncertainty.