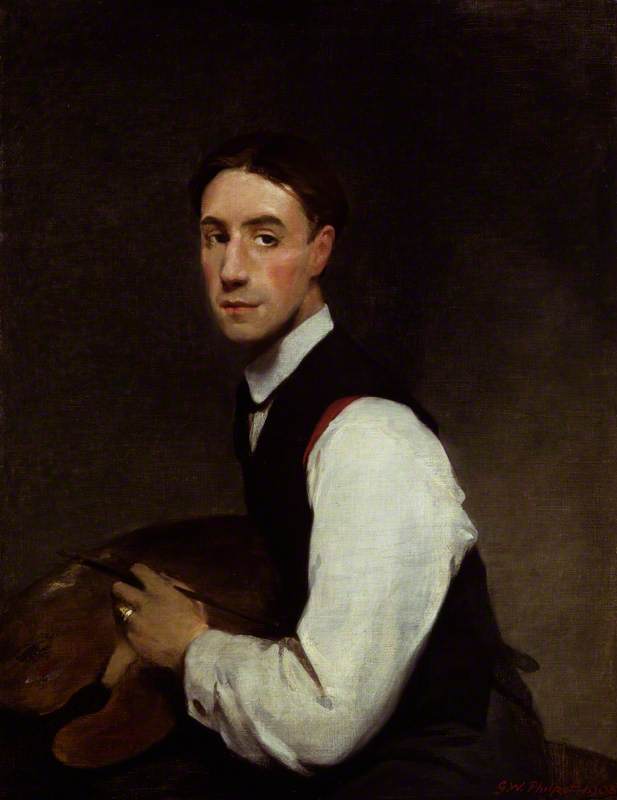 British painter and sculptor, born in London. He studied at Lambeth School of Art, 1900–03, and at the *Académie Julian, Paris, 1905. It was as a portraitist that Philpot had his main success, which was at its height in the 1920s. However, he also did a mural, Richard I Leaving England for the Crusades (1927), for St Stephen's Hall, Westminster, and had ambitions as a painter of allegories and religious subjects (he became a convert to Catholicism in 1905). Philpot grew tired of routine fashionable portraiture (however lucrative it was) and in 1931 he moved to Paris for a year and started working in a more modern idiom—flatter and more stylized than his earlier manner. The new style met with a mixed reception and some of Philpot's earlier admirers were dismayed: ‘Glyn Philpot “Goes Picasso”’, read a headline in the Scotsman on 30 April 1932.

Read more
He died suddenly of heart failure in his London studio. The day after his funeral his friend and disciple Vivian Forbes (1891–1937) committed suicide; his behaviour had been unbalanced for several years. Philpot was out of fashion for many years, but his reputation began to revive in the 1970s (coinciding with a general renewal of interest in the *Art Deco style, of which he is sometimes said to be a representative) and there was a major exhibition of his work at the National Portrait Gallery, London, in 1984–5. He is now perhaps best known for his portraits of black people—his West Indian servant Henry Thomas was a favourite model. Further Reading R. Gibson, Glyn Philpot 1884–1937: Edwardian Aesthete to Thirties Modernist (1984)

Oxford Dictionary of National Biography
Painter and sculptor who was born in Clapham, London but was raised in Herne Bay, Kent. Philpot attended the Lambeth School of Art, 1901-03 studying under Philip Connard and began showing of the RA in 1904. In 1906 he visited France and spent a year in the studio of Jean-Paul Laurens of the Académie Julian in Paris. He converted to Roman Catholicism in 1906 and although a practising homosexual was devout in his religious beliefs. In 1910 he held his first solo exhibition at the Baillie Gallery, London and by 1912 he was elected a member of the ISSPG and by 1915 an Associate of the RA and a full member in 1923. A prolific exhibitor he also showed at the Cooling Galleries, Chenil Gallery, FAS, Grosvenor Gallery, Goupil Gallery, Ipswich Fine Art Club, Society of Twenty-Five Painters, Leicester Galleries, Walker Art Gallery, Liverpool, Grafton Galleries, London Salon, Society of Sussex Painters, Storran Gallery, Redfern Gallery, RSA and RP and ROI the latter two societies both having elected him a member. He travelled widely in Spain and Italy and received many portrait commissions, winning a gold medal and £300 from the Carnegie International Exhibition at Pittsburgh in 1913. When World War I was declared in 1914, he was living in Venice but promptly returned to England to enlist. After several rejections on medical grounds, he was finally accepted but was demobilised when his health broke down in 1917. As an Official War Artist, Philpot painted portraits of admirals.

His other portrait commissions included King Fouad of Egypt and Prime Minister, Stanley Baldwin, Siegfried Sassoon and Oswald Mosley. By the late 1920’s Philpot had become dissatisfied with the Edwardian aesthetic ideals, still largely required in official art circles, and in the early 1930’s he moved to Paris and in that same year represented Britain at the Venice Biennale. In the French capital his style changed dramatically, owing to the influence of contemporary French art and for about a year, he began to sculpt and model in clay. He is especially known for his paintings of Negroes, mostly based on Henry Thomas, a young Jamaican whom Philpot's godson, stage designer Oliver Messel had found wandering in the National Gallery. He became Philpot's housekeeper and devoted friend, living in his house until his death. His lifelong companion artist Vivian Forbes committed suicide a day after Philpot’s demise. In 1984 an important retrospective was staged at the National Portrait Gallery, bringing his work to a wider audience.