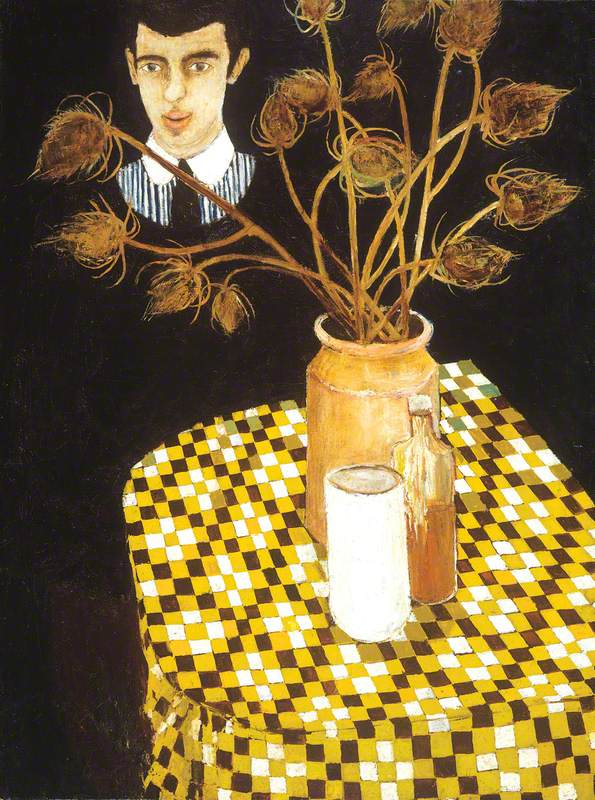 Self Portrait, Dawn, Noon and Night 1958

British painter, born in Birmingham. He studied at Birmingham College of Art, 1955–9, and at the *Royal College of Art, 1959–62, and with a number of fellow RCA students—Derek *Boshier, David *Hockney, Allen *Jones, R. B. *Kitaj—he emerged as one of the leading exponents of British *Pop art at the *Young Contemporaries exhibition of 1961. Early in his career a certain sinister edge was detected which distinguished him from the others.

Read more
The painter Richard *Smith said that he ‘adds darkness to brightness’. Typically his imagery is drawn from modern American culture—jukeboxes, pinball machines, automobiles, film star pin-ups and so on—painted in the tight, glossy manner of commercial art. However, the images are usually set into bold heraldic frameworks or fragmented into sections and reorganized, so that illusionism, reinforced by the use of spray-paint technique, and abstraction are combined. Phillips described his paintings as ‘multi-assemblages of spatial, iconographical, and technical factors’. He went on to maintain that having grown up with advertising and mass communication he used such imagery ‘without a second thought’. Reviewing a retrospective exhibition, Richard Shone (Burlington Magazine, October 1982) noted that he had never achieved in his own country the popularity of some of his contemporaries. He puts this down to Phillips being an ‘unsympathetic’ artist, whose paintings while undeniably intelligent are ‘peculiarly repellent—harsh, ungenerous, lacking visual oxygen’. In 1964–6 Phillips lived in New York, then settled in Zurich and subsequently in Mallorca. Further Reading M. Livingstone, Retrovision: Peter Phillips (1982)