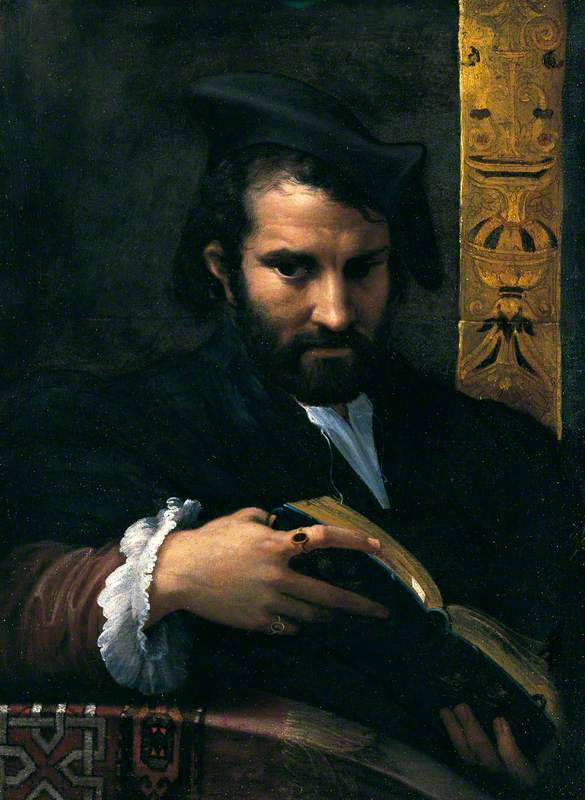 (b Parma, 11 Jan. 1503; d Casalmaggiore, nr. Parma, 24 Aug. 1540). Italian Mannerist painter, draughtsman, and printmaker; his nickname (the Little Parmesan) comes from his native city, which was also his main place of work. He was precociously gifted, and as early as 1522–3 he painted highly accomplished frescos in two chapels in S. Giovanni Evangelista, Parma; they show his admiration for Correggio, who was working in the same church at this time.

Read more
The originality and sophistication he displayed from the beginning, particularly his love of unusual spatial effects, is most memorably seen in his Self-Portrait in a Convex Mirror (1524, KH Mus., Vienna), in which Vasari said he looks ‘so beautiful that he seemed an angel rather than a man’. In 1524 Parmigianino moved to Rome, possibly via Florence, and his work became both grander and more graceful under the influence of Raphael and Michelangelo. The Vision of St Jerome (1526–7, NG, London) is his most important work of this time, showing the disturbing emotional intensity he created with his elongated forms, disjointed sense of space, chill lighting, and lascivious atmosphere. Parmigianino left Rome after it was sacked by German troops in 1527 and moved to Bologna. In 1530 he returned to Parma and contracted to paint frescos in S. Maria della Steccata. He failed to complete the work, however, and in 1539 was imprisoned for breach of contract. Vasari says he neglected the work because he was infatuated with alchemy—‘he allowed his beard to grow long and disordered…he neglected himself and grew melancholy and eccentric’. His later paintings show no falling off in his powers, however, and his work reaches its apotheosis in the celebrated Madonna of the Long Neck (Uffizi, Florence), commissioned in December 1534 for the church of S. Maria dei Servi, Parma, but still unfinished at the artist's death. The forms of the figures are extraordinarily elongated and tapering and the painting has a refinement and grace that places it among the archetypal works of Mannerism. Parmigianino's range extended beyond religious works. He painted a highly erotic Cupid Carving his Bow (1535, KH Mus., Vienna), and was one of the subtlest portraitists of his age (two superb examples are in the Mus. di Capodimonte, Naples). The landscape backgrounds to his religious works have a mysterious and visionary quality that influenced Niccolò dell' Abate and through him French art (see Fontainebleau, School of). Parmigianino, whose draughtsmanship was exquisite, also made designs for engravings and chiaroscuro woodcuts and seems to have been the first Italian artist to produce original etchings from his own designs.