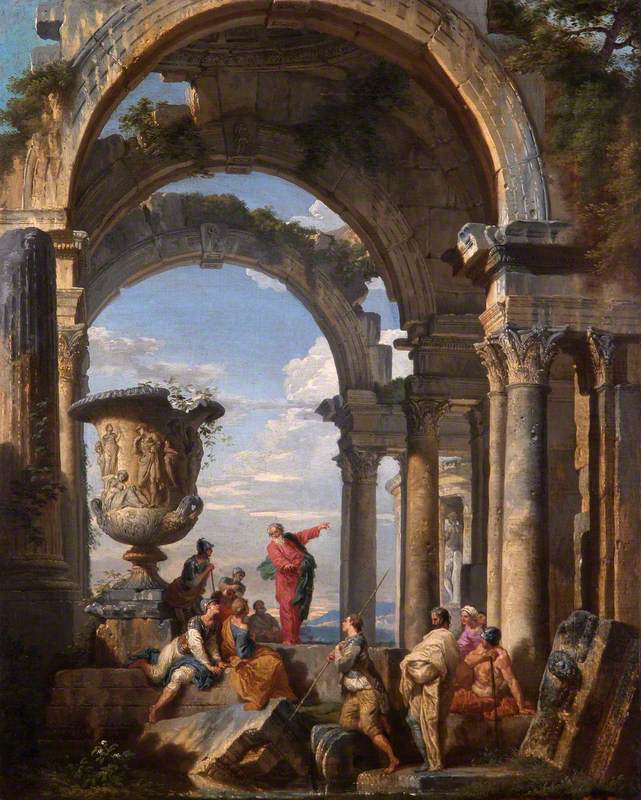 (b Piacenza, 17 June 1691; d Rome, 21 Oct. 1765). Italian painter. He trained as a quadraturista and stage designer in Piacenza, then in 1711 settled in Rome. Initially he worked mainly as a fresco decorator, but he became the pre-eminent painter of real and imaginary views of the city—something of a counterpart to Canaletto in Venice (both of them produced much of their output for visitors making the Grand Tour). He was the first painter to make a special feature of ruins—an aspect of his work that links him with Hubert Robert (who was possibly his pupil) and Piranesi—and he also did paintings of public festivities and ceremonies (The Lottery Draw in Piazza di Montecitorio, 1747, NG, London). Panini taught perspective at the French Academy in Rome and his influence was strong with French as well as Italian artists (indeed his reputation was so high in France that in 1732 he was made a member of the Académie Royale de Peinture et de Sculpture in Paris—an honour rarely accorded to foreigners).

Read more
He was a prolific painter who ran a busy studio, and many galleries have examples of his work; some of his compositions exist in several versions.