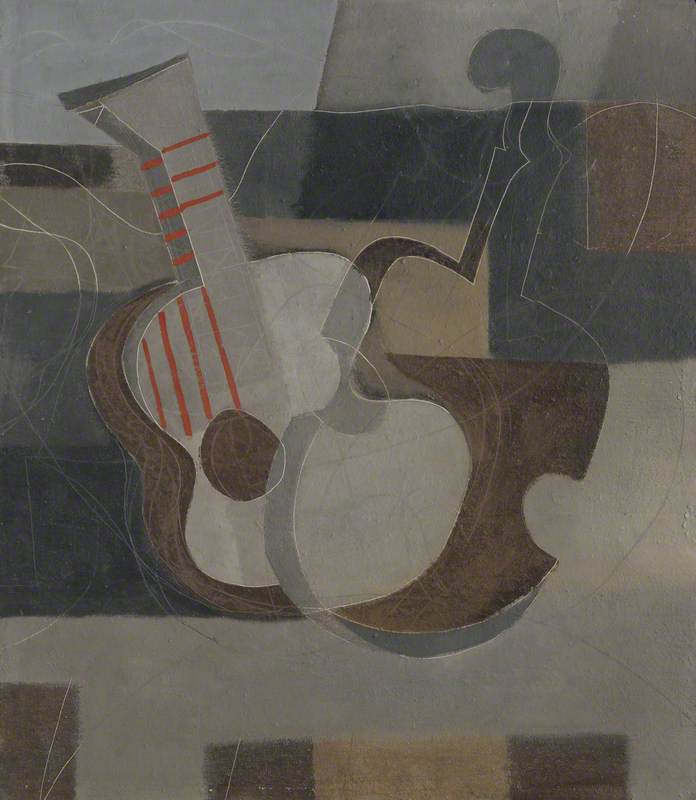 (b Denham, Buckinghamshire, 10 Apr. 1894; d London, 6 Feb. 1982). British painter and maker of reliefs, one of his country's most distinguished pioneers of abstract art. From his father, Sir William Nicholson, he inherited a feeling for simple and fastidious still lifes, which with landscapes made up the bulk of his early work. In 1921, on a visit to Paris, he first saw Cubist paintings and in the following years his still lifes showed a personal response to the standard Cubist repertoire of objects such as jugs and glasses, which he arranged as flat shapes on the picture plane. Nicholson was also influenced by the naive painter Alfred Wallis, whose work he discovered in 1928 and whose roughly textured surfaces he emulated. From the early 1930s he turned to abstraction, partly because of the influence of Barbara Hepworth (they shared a studio from 1932 and married in 1938) and partly because of the impact of several visits he made to Paris at this time.

Read more
He joined the Abstraction-Création association in 1933 and became friendly with several leading avant-garde artists, Mondrian's work in particular coming as a revelation to him. In 1933 he made his first abstract relief and in 1934 his first strictly geometrical ‘white relief’ in painted wood, using only straight lines and circles. Such works were the most uncompromising examples of abstract art made by a British artist up to that date (White Relief, 1935, Tate, London). He also did paintings in a similar intellectual vein but with a poetic refinement of colour that offsets their severity of composition (Painting, 1937, Tate). By this time Nicholson was recognized as being at the forefront of the modern movement in England. He was a member of Unit One (1933), and one of the editors of Circle (1937). In 1939 he and Hepworth moved to Cornwall, where they became the nucleus of the St Ives School. They divorced in 1951 and in 1958 Nicholson settled in Switzerland with his third wife, the Swiss photographer Felicitas Vogler. After the Second World War he won an international reputation, accompanied by many awards. He returned to England in 1971. His late work moved freely between abstraction and figuration and included large, free-standing reliefs, notably one in marble in the garden of Sutton Place, Surrey (1982). Nicholson's first wife, Winifred Nicholson (1893–1981), was a painter of distinction. She is best known for her flower paintings, but she also did other subjects and abstracts, all her work showing her joy in colour and light.

Painter and relief-maker, born Benjamin Lauder Nicholson at Denham, Buckinghamshire the son of artist William Nicholson. He studied at the Slade School, 1910-11 and travelled extensively during the period 1912-18. In 1920 he married Winifred Dacre and held his first solo exhibition in 1922 at the Adelphi Gallery in London. During the 1920’s Nicholson made regular visits to Paris becoming more influenced by the abstract art he saw there. With Barbara Hepworth, whom he later married, he joined Abstraction-Creation, exhibited at the 7 & 5 Society and was a member of Unit One. In 1937 he co-edited 'Circle', a compendium of constructivist art. During the period 1939-58, he lived at Carbis Bay and while there showed with the Penwith Society of Arts. During his stay in Cornwall, he was also associated with the St. Ives School and artists such as Terry Frost, Barbara Hepworth, Roger Hilton, the Martin's, William Scott, Robert Adams and Adrian Heath in the Constructionism movement.

Following his divorce from Hepworth, he married his 3rd wife the photographer Felicitas Vogler and lived in Switzerland. He was the father of triplets with Hepworth, Sarah, Simon and Rachel Nicholson born in 1934 the latter two of whom also became accomplished artists.