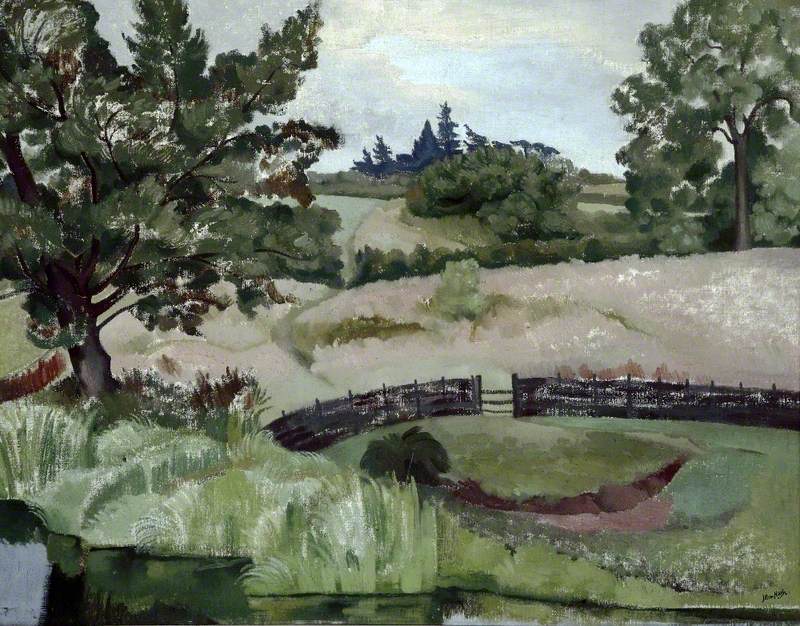 Painter, mainly of landscape, in oil and watercolour, wood engraver and illustrator, especially of humorous subjects and plants. Born in London, the brother of the painter Paul Nash, he worked initially as a local journalist. Encouraged by Paul he turned to art, remaining self-taught. Exhibited with his brother at the Dorien Leigh Galleries, 1913, first one-man show at the Goupil Gallery, 1921. By that time Nash was established as a member of the Friday Club, LG and Cumberland Market Group. In 1914 he had begun to paint in oil and this combined with his experience with the Artists’ Rifles led to some fine pictures when he was made an Official War Artist in 1918. Oppy Wood, Evening, and Over the Top: The 1st Artists’ Rifles at Marcoing, both in the Imperial War Museum, are good examples.

Read more
Nash was also an Official War Artist attached to the Admiralty in World War II. Between the wars Nash established himself as a sympathetic painter of the English landscape using a style that was less dramatic than his brother Paul’s, yet building up a steady following. This painting was interlarded with forays into diverse fields, such as acting as the London Mercury’s first art critic; much book illustration; and painting a big mural for the 1937 Paris Exhibition. Nash taught at Ruskin School, Oxford, 1922–7, and for two long periods before and after World War II at the Royal College of Art. Demobilised in 1944, he lived in a country cottage near Colchester where he developed his expertise as a plantsman and painted the East Anglian countryside. The Tate Gallery among many public galleries holds his work. In 1951 elected RA, where a major show of his work was held in 1967. Studio memorial show at New Grafton Gallery, 1978, which continued periodically to highlight Nash’s work, including a shared exhibition with John O’Connor in 2004.