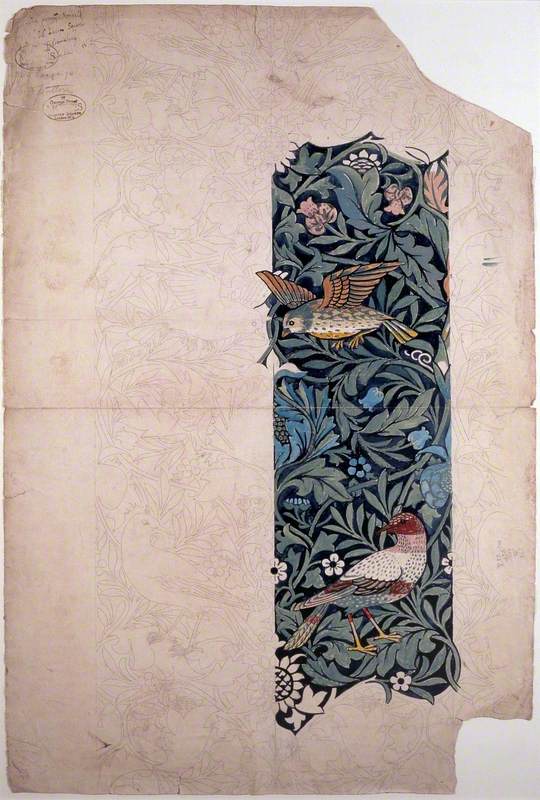 (b Walthamstow, Essex [now in Greater London], 24 Mar. 1834; d London, 3 Oct. 1896). English designer, craftsman, writer, painter, and visionary socialist. As a student at Oxford University he formed a lifelong friendship with Burne-Jones and began to write poetry and to study medieval architecture. In 1856 he was apprenticed to the architect G. E. Street, but soon left to paint under Rossetti's guidance—his only finished oil painting, Queen Guenevere (1858, Tate, London), is strongly Pre-Raphaelite. In 1859, Morris married Jane Burden, who appears in numerous paintings by Rossetti as an archetypal femme fatale; Morris's architect friend Philip Webb built the famous Red House, Bexleyheath, for the couple. With Webb, Rossetti, Burne-Jones, Ford Madox Brown, P.

Read more
P. Marshall (a surveyor), and Charles Faulkner (an accountant), Morris founded the manufacturing and decorating firm of Morris, Marshall, Faulkner & Co. in 1861 (reorganized in 1875 as Morris & Co). After a shaky start, the firm prospered, producing furniture, tapestry, stained glass, furnishing fabrics, carpets, and much more. Morris's wallpaper designs are particularly well known (they are still produced commercially today) and Burne-Jones did some superb work for the firm, particularly in stained glass and tapestry design. Morris repudiated the concept of fine art and his company was based on the ideal of a medieval guild, in which the craftsman both designed and executed the work. As a socialist he wished to produce art for the masses, but there was an inherent flaw in his ambition, for only the rich could afford his expensive hand-made products. His ideal of universal craftsmanship and his glorification of manual skill thus proved unrealistic in failing to come to terms with modern machine production. However, his work bore lasting fruit, in England (see Arts and Crafts Movement) and abroad, in the emphasis it laid on the social importance of good design and fine workmanship in every walk of life. He also played an important part in the development of the private printing press, through his Kelmscott Press, which operated 1890–8; its most famous product is the 1896 edition of Geoffrey Chaucer's works, with illustrations by Burne-Jones. Morris's homes at Walthamstow in London and Kelmscott Manor in Oxfordshire are open to the public and contain good examples of work designed by him and his associates.

Discover the radical politics of interior design in the Arts & Crafts movement.