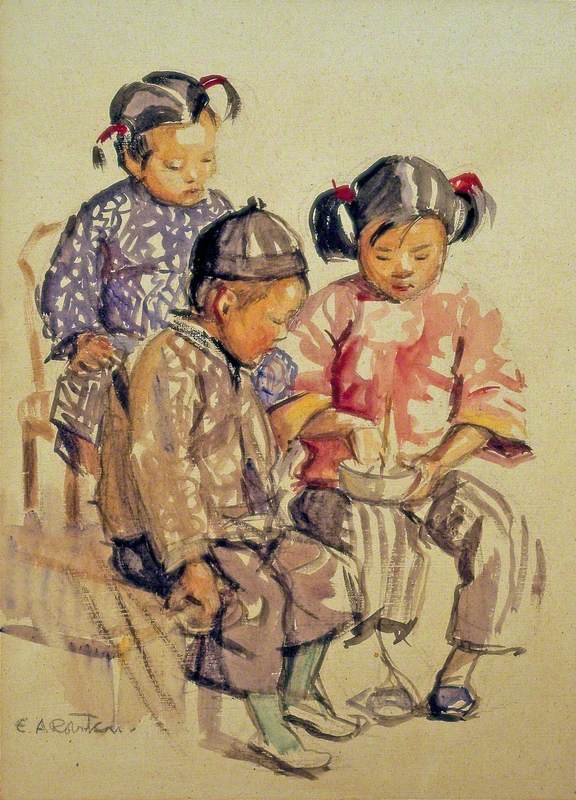 Painter in oil and watercolour of figure studies, landscapes and townscapes, born at Glenwherry, County Antrim, Northern Ireland, into a family of Presbyterian ministers, her family moving to Scotland in 1888. After governesses and a short time at Kilmarnock Academy, from 1902–7 she studied at Glasgow School of Art, under Fra Newbery, Jean Delville and Paul Artot. In 1908 Moore won the McGlashan Prize at Glasgow of Art Club show. She was a Voluntary Aid Detachment nurse at Craigleith Military Hospital, Edinburgh, in World War I, then continued to exhibit, including Royal Glasgow Institute of the Fine Arts, RSA and Walker Art Gallery, Liverpool. In 1922, married Dr Robert Cecil Robertson, later also a painter, who from 1925 accepted a public health appointment in Shanghai.

Read more
Although Robert and Eleanor lived in China, they had leaves in Scotland where they were represented by the Kilmarnock and later Glasgow dealer Ian MacNicol, who had acquired the Robertson family business as artist’s colourman, framer and gilder. MacNicol submitted Robert’s work to shows in Scotland and to the RA and mounted an exhibition of Eleanor’s work at his gallery in Kilmarnock in 1934. Both painted widely in China. Robert died in Hong Kong in 1942. After evacuation from there in 1937, Eleanor returned to Scotland, latterly producing landscapes of the Kyles of Bute, dying in Edinburgh. Her daughter Ailsa Tanner wrote a memoir of both parents for an exhibition of their work at the Lillie Art Gallery, Milngavie, in 1997. Moore was included in the Glasgow Girls exhibition at Kelvingrove Art Gallery, Glasgow, 1990.