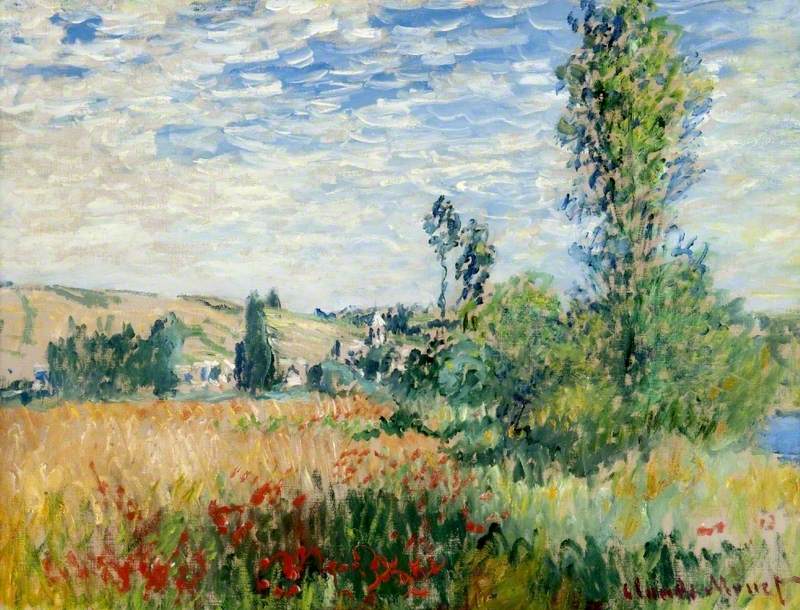 Claude Monet (Born Paris, 14 November 1840; died Giverny, 5 December 1926). French Impressionist painter. He is regarded as the archetypal Impressionist in that his devotion to the ideals of the movement was unwavering throughout his long career, and it is fitting that one of his pictures—Impression: Sunrise (1872, Mus. Marmottan, Paris)—gave the group its name. His youth was spent in Le Havre, where he first excelled as a caricaturist but was then converted to landscape painting by his early mentor Boudin, from whom he derived his enthusiasm for painting out of doors. In 1859 he studied in Paris at the Académie Suisse and formed a friendship with Pissarro. After two years' military service in Algiers, he returned to Le Havre and met Jongkind, to whom he said he owed ‘the definitive education of my eye’. Then, in 1862, he entered the studio of Gleyre in Paris and there met Renoir, Sisley, and Bazille, with whom he was to form the nucleus of the Impressionist group.

Read more
Monet's devotion to painting out of doors is illustrated by the famous story concerning one of his most ambitious early works, Women in the Garden (1866–7, Mus. d'Orsay, Paris). The picture is about 2.5 m (8 ft) high and to enable him to paint all of it outside he had a trench dug in the garden so the canvas could be raised or lowered by pulleys to the height he required. Courbet visited him when he was working on it and said Monet would not paint even the leaves in the background unless the lighting conditions were exactly right. However, although he always liked to maintain this image as an outdoor painter, he later came to rely more and more on studio work.

During the Franco-Prussian War (1870–1) Monet took refuge in England with Pissarro: he painted the Thames and London parks, and met the dealer Durand-Ruel, who was to become one of the great champions of the Impressionists. From 1871 to 1876 he lived at Argenteuil, a village on the Seine near Paris, and here were painted some of the most joyous and famous works of the Impressionist movement, not only by Monet, but by his visitors Manet, Renoir, and Sisley. In 1878 he moved to Vétheuil and in 1883 he settled at Giverny, also on the Seine, but about 65 km (40 miles) from Paris.

Early in his career he had experienced extreme poverty, but in the 1880s he began to prosper. By 1890 he was successful enough to buy the house at Giverny he had previously rented and in 1892 he married his mistress, with whom he had begun an affair in 1876, three years before the death of his first wife. From 1890 he concentrated on series of pictures in which he painted the same subject at different times of the day in different lights—Haystacks or Grainstacks (1890–1) and Rouen Cathedral (1891–5) are the best known. He continued to travel widely, visiting London and Venice several times (and in 1895 Norway, where he painted with his beard ‘covered in icicles’), but increasingly his attention was focused on the celebrated water garden he created at Giverny, which served as the theme for the series of paintings of waterlilies (Nymphéas) that began in 1899 and grew to dominate his work completely (in 1914, by now wealthy and famous, he had a special studio built in the grounds of his house so he could work on the huge canvases).

From 1908 he was troubled by failing eyesight (he had a cataract operation in 1923), but he painted until the end, completing a great decorative scheme of waterlily paintings that he donated to the nation in 1926, the year of his death. They were installed in the Orangerie, Paris, in 1927. In these late works his style had become so loose and free that the forms almost disappear in a blur of vibrant brushstrokes. It has even been suggested that they anticipate Abstract Expressionism, but the subject matter always remained important to Monet.