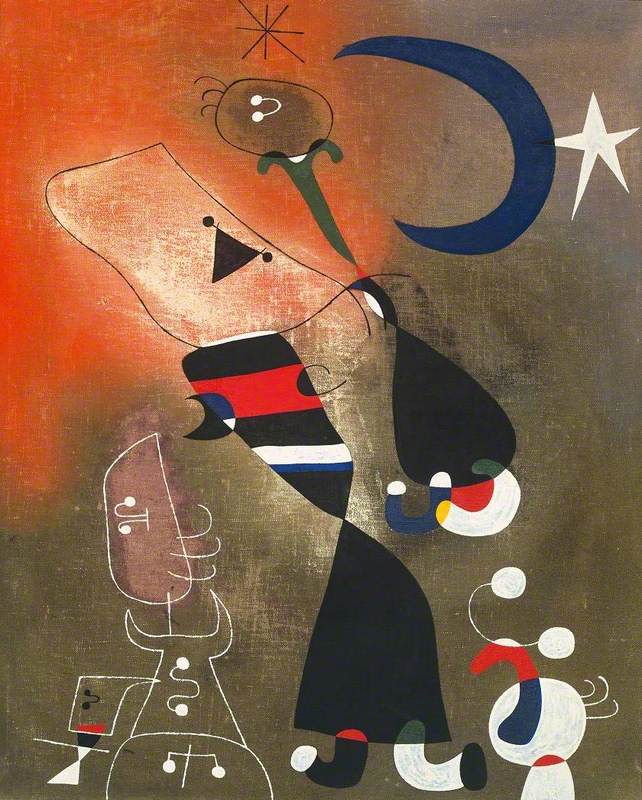 (b Barcelona, 20 Apr. 1893; d Palma de Mallorca, 25 Dec. 1983). Spanish painter, sculptor, printmaker, and designer. He first visited Paris in 1919 and from then until 1936 (when the Spanish Civil War began) his regular pattern was to spend the winter there and the summer at his family's farm near Barcelona. His early work shows the influence of various modern movements—Fauvism, Cubism (he was a friend of Picasso), and Dadaism—but he is above all associated with the Surrealists, whose first manifesto he signed in 1924. Throughout his life, whether his work was purely abstract or whether it retained figurative suggestions, Miró remained true to the basic Surrealist principle of releasing the creative forces of the unconscious mind from the control of logic and reason.

Read more
However, even though André Breton wrote that he was ‘probably the most Surrealistic of us all’, Miró was never a formal member of the movement and always stood somewhat apart because of the variety, geniality, and lack of attitudinizing in his work, which shows none of the superficial devices beloved of other Surrealists. One of the works in which he first displayed an unmistakable personal vision is Harlequin's Carnival (1924–5, Albright-Knox AG, Buffalo), featuring a bizarre assembly of insect-like creatures dancing and making music—a scene inspired by ‘my hallucinations brought on by hunger’. Much of his work has the delightful quality of playfulness seen in this picture, but he was inspired to much more sombre and even savage imagery by the Spanish Civil War, during which he designed propaganda posters for the Republicans fighting against Franco.Miró settled in Paris in 1936 because of the Civil War, but in 1940 he returned to Spain to escape the German occupation of France and thereafter lived mainly on the island of Majorca. It was from about this time that he began to achieve international recognition. For the rest of his long life he worked with great energy in a wide variety of fields. In 1944 he began making ceramics and slightly later he took up sculpture, initially small terracottas but eventually large-scale pieces for casting in bronze. He visited the USA for the first time in 1947 and did a large mural for the Terrace Hilton Hotel in Cincinnati. This fulfilled his desire to communicate with a large public, and several of the major works of his later year were in a similar vein, notably a mural for Harvard University in 1950 (now replaced by a ceramic copy; the original is in MoMA, New York) and two vast ceramic wall decorations, Wall of the Sun and Wall of the Moon (installed 1958), for the Unesco Building in Paris. Another aspect of his desire to make his art widely accessible is his productivity as a printmaker (etchings and lithographs). He continued to explore new techniques into his old age, taking up stained-glass design when he was in his eighties. In spite of the worldwide fame he acquired, he was a modest, retiring character, utterly devoted to his work, and in one of his rare public statements he criticized Picasso for what seemed to him like a mania for publicity. The Foundation Joan Miró was opened in 1975 on the heights of Montjuic overlooking Barcelona. It is designed both as a memorial museum housing a collection of Miró's works and as a centre of artistic activity.