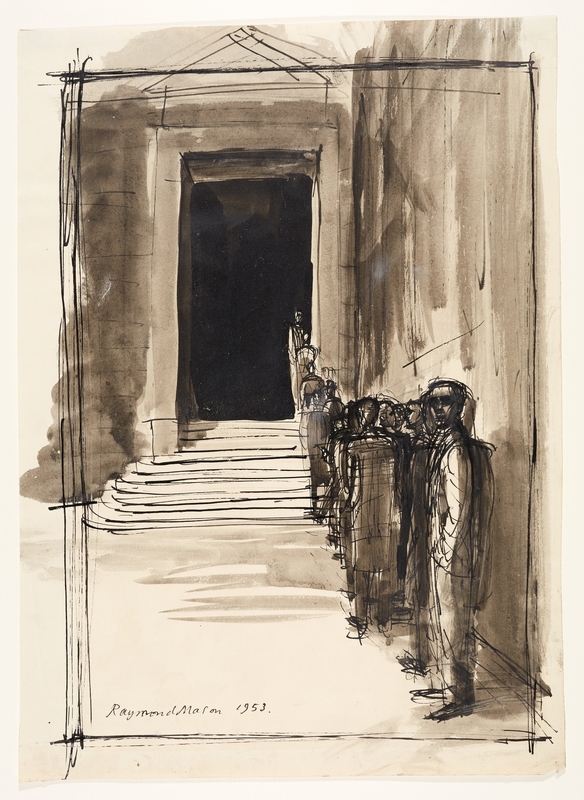 Drawing for a Terracotta 1953

Sculptor in bronze and epoxy resin and stage designer, born in Birmingham. The son of a motor mechanic brought up in a poor part of Birmingham, Mason wanted to be a research chemist, but his art master persuaded him to study at the city’s School of Arts and Crafts, 1937. After being invalided out of the Royal Navy Mason was briefly at Royal College of Art, 1942, then at Ruskin School of Drawing in Oxford, 1943, and Slade School of Fine Art, 1943–6. In the latter year Mason decided to settle in Paris, where he continued to work, being granted a French State Scholarship to École des Beaux-Arts. After mounting a first show of coloured abstract sculptures at Galerie Maeght, Mason went figurative under the influence of Giacometti. His first important work was Man in the Street, of 1952.

Read more
From this solo figure he moved on to Barcelona Tram, of 1953, with over 20 figures; then in 1975 his 99-figure Crowd was installed in the Jardin des Tuileries. Another powerful work, The Departure of Fruit and Vegetables from the Heart of Paris 28 February 1969, was in 1975 installed in the Chapel of St Joseph in the church of St Eustache. In 1959 Mason had been commissioned to design the set and costumes for Phèdre at Théâtre du Gymnase. Mason believed that “realism is the common language of everybody and everybody thus has an entry into my work”, but critical plaudits were slower in coming. In 1989 Birmingham Museum and Art Gallery, which holds Mason’s work, staged a major exhibition, which toured. The previous year, Mason had been commissioned to provide a sculpture for the city. His resin group Forward, which articulated optimism and ambition for Birmingham and its population, was unveiled in the Centenary Square in 1991, but was vandalised by arsonists in 2003. In that year there was a show of Mason’s sculptures and works on paper at Marlborough Fine Art.