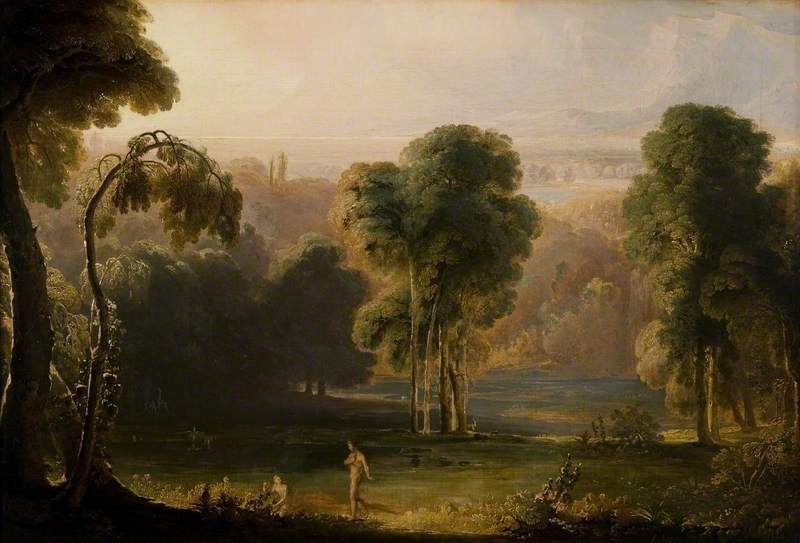 (b Haydon Bridge, Northumberland, 19 July 1789; d Douglas, Isle of Man, 17 Feb. 1854). English Romantic painter and mezzotint engraver, celebrated for his melodramatic scenes of cataclysmic events crowded with tiny figures placed in vast architectural or landscape settings. He caught the public imagination with spectacular paintings such as Joshua Commanding the Sun to Stand Still (1816, United Grand Lodge of Great Britain, London), the work that made his reputation, and in 1821 Lawrence referred to him as ‘the most popular painter of the day’. His work was indeed truly popular, for he made his living mainly through the sale of prints of his pictures rather than the paintings themselves. He became famous in France as well as Britain, he was knighted by Leopold I of Belgium (1833), and his influence was felt by American artists such as Cole.

Read more
However, while he pleased a large public and was regarded by some admirers as one of the greatest geniuses who ever lived, Martin was reviled by Ruskin and other critics, who considered his work vulgar sensationalism. Few artists, indeed, have been subject to such extremes of critical fortune, and he later sank so much in esteem that very large and once famous paintings by him were sold in the 1930s for as little as £2. By the 1970s his reputation had greatly revived. Martin made mezzotints not only as a means of reproducing his paintings but also as original compositions. Most of them are of biblical subjects and he also made famous illustrations to John Milton's Paradise Lost (1825–7). These show that although he had great weaknesses as an artist, especially in his drawing of the human figure, he also had a vividness and grandiloquence of imagination not unworthy of such elevated subjects. He is sometimes called ‘Mad Martin’, but the sobriquet is undeserved and applies more to his brother Jonathan, who set fire to York Minster in 1829, badly damaging the building, and was confined to an asylum for the rest of his life. John Martin was eminently sane and in the 1830s almost bankrupted himself with extremely ambitious but entirely practical plans for improving the water supply and sewage system of London. His schemes did not come to fruition, but they reveal a heroic desire to put the architectural visions of his paintings into a concrete form. His work is best represented in Tate Britain, London, and in the Laing Art Gallery in Newcastle upon Tyne, near his native Haydon Bridge.