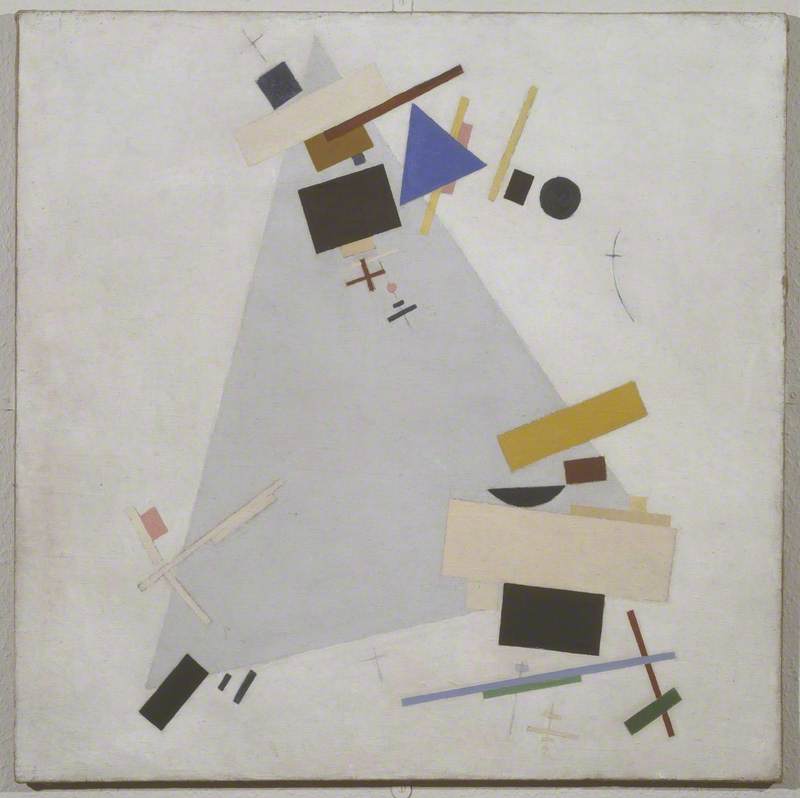 (b nr. Kiev, 11 [23] Feb. 1878 [or ?1879]; d Leningrad, 15 May 1935). Russian painter, designer, and writer, with Mondrian the most important pioneer of geometric abstract art. He began working in an unexceptional Post-Impressionist manner, but by 1912 he was painting peasant subjects in a massive ‘tubular’ style similar to that of Léger as well as pictures combining the fragmentation of form of Cubism with the multiplication of the image of Futurism (The Knife Grinder, 1912, Yale Univ. AG). Malevich, however, was dissatisfied with representational art or—as he put it—fired with the desire ‘to free art from the burden of the object’. He was a deeply religious man, with mystical leanings, and he thought that by abandoning the need to depict the external world he could break through to a deeper level of meaning and ‘swim in the white free abyss’ (he often used the analogy of flight and space when discussing his paintings).

Read more
His first abstract work was a backdrop for the Futurist opera Victory over the Sun, produced in the Luna Park Theatre, St Petersburg, in December 1913; his original drawing (now in the Theatrical Mus., St Petersburg) shows a rectangle divided almost diagonally into a black upper segment and a white lower one. From this he developed Suprematism, which brought abstract painting to a geometric simplicity more radical than anything previously seen. He claimed that he made a picture ‘consisting of nothing more than a black square on a white field’ as early as 1913, but Suprematist paintings were first made public in Moscow in 1915 (there is often difficulty in dating his work and also in knowing which way up his paintings should be hung, photographs of early exhibitions sometimes providing conflicting evidence). Over the next few years Malevich moved away from absolute austerity, tilting rectangles from the vertical, adding more colours, and introducing a suggestion of the third dimension and even a degree of painterly handling, but around 1918 he returned to his purest ideals with a series of White on White paintings. After this he seems to have realized he could go no further along this road and virtually gave up abstract painting, turning more to teaching, writing, and making three-dimensional models that were important in the growth of Constructivism. In 1919, at the invitation of Chagall, he started teaching at the art school at Vitebsk, where he exerted a profound influence on Lissitzky, and in 1922 he moved to Petrograd (Leningrad), where he lived for the rest of his life. He went to Warsaw and Berlin in 1927, accompanying an exhibition of his works, and visited the Bauhaus. In the late 1920s he returned to figurative painting, but he was out of favour with a political system that now demanded Socialist Realism from its artists and he ran into trouble with the authorities. However, he remained a revered figure among artists and when he died his body lay in state at the Leningrad Artists' Union in a coffin—which he had designed himself—bearing Suprematist motifs. Malevich wrote various theoretical tracts and several collections of his writings have been published. His influence on abstract art—in the West as well as Russia—was enormous.