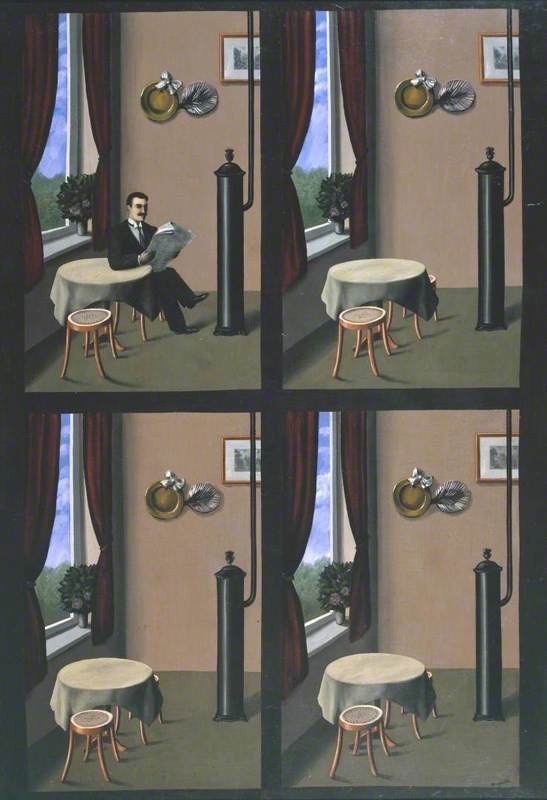 (b Lessines, 21 Nov. 1898; d Brussels, 15 Aug. 1967). Belgian painter, one of the leading exponents of Surrealism. With the exception of a three-year stay in a suburb of Paris (1927–30), he spent his entire career in Brussels, where he lived a life of bourgeois regularity (the bowler-hatted figure who so often features in his work is to some extent a self-portrait). After initially working in a Cubist-Futurist style, he turned to Surrealism in 1925 under the influence of de Chirico and by the following year had already emerged as a highly individual artist with The Menaced Assassin (MoMA, New York), a picture that displays the startling and disturbing juxtapositions of the ordinary, the strange, and the erotic that were to characterize his work for the rest of his life.

Read more
Apart from a period in the 1940s when he experimented first with pseudo-Impressionist brushwork and then with a Fauve technique, he worked in a precise, scrupulously banal manner (a reminder of the early days when he made his living designing wallpaper and drawing fashion advertisements) and he always remained true to Surrealism. He had a repertory of obsessive images that appeared again and again in ordinary but incongruous surroundings. Enormous rocks that float in the air and fishes with human legs are typical leitmotivs. He repeatedly exploited ambiguities concerning real objects and images of them (many of his works feature paintings within paintings), inside and out-of-doors, day and night. In a number of paintings, for example, he depicted a night scene, or a city street lit only by artificial light, below a clear sunlit sky. He also made Surrealist analogues of a number of famous paintings—for example David's Madame Récamier and Manet's The Balcony, in which he replaced the figures with coffins. Late in life he also made wax sculptures based on such paintings, and some of them were cast in bronze after his death (Madame Récamier, Pompidou Centre, Paris). He also made prints and a few short comic films, using his friends as actors. His work was included in many Surrealist exhibitions, but it was not until he was in his fifties that he began to achieve international success and honours. By the time of his death his work had had a powerful influence on Pop art, and it has subsequently been widely imitated in advertising. In the fertility of his imagination, the unforced spontaneity of his effects, and not least his rare gift of humour, he was one of the very few natural and inspired Surrealist painters. J. T. Soby (René Magritte, 1965) summed this up felicitously when he wrote: ‘In viewing Magritte's paintings…everything seems proper. And then abruptly the rape of commonsense occurs, usually in broad daylight.’