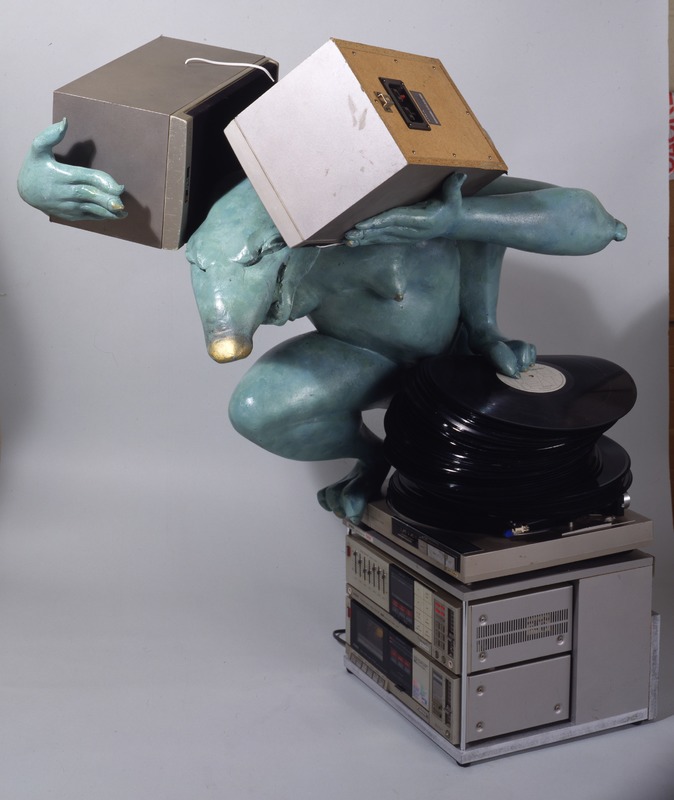 Sculptor and creator of performance-type constructions, painter and collagist, and teacher, born in Methil, Fife. From 1974–9 he studied at Duncan of Jordanstone College of Art, Dundee; then from 1979–82 he pursued a postgraduate course in sculpture department of Royal College of Art. Settled in London. Mach had a one-man show at Lisson Gallery in 1982. The following year he was commissioned to create his huge Polaris Submarine as part of The Sculpture Show at the Hayward Gallery, for which he used old car tyres. Mach went on to travel the world creating many such objects using the cast-offs from consumer society, as his comment on it. His belief was that “If it’s a good idea then it shouldn’t matter how long it lasts, five minutes or forever.

Read more
” In 1996 Jason & Rhodes exhibited pictures by Mach, incorporating reconstructed colour photographs, which took a wry look at icons of British culture. Drawings and collages were at Jill George Gallery, 2000, also Jill George (in association with William Jackson Gallery) and Gallery of Modern Art, Glasgow, both 2002, with another Jill George show of collages in 2004. Mach’s hectic work schedule spawned numerous solo shows and international commissions. In 1998 he was elected RA; in 1999 was appointed honorary professor, sculpture department, Edinburgh College of Art; and in 2000 the RA’s professor of sculpture, showing in the Summer Exhibition. Collections holding his work include the Scottish National Gallery of Modern Art and the Cass Sculpture Foundation.