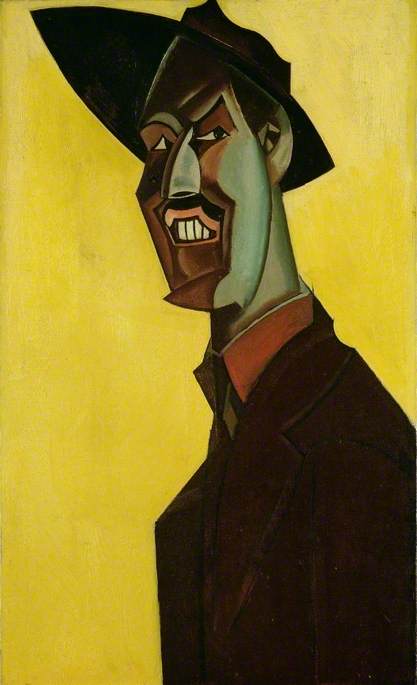 (b on his parents' yacht, off Amherst, Nova Scotia, 18 Nov. 1882; d London, 7 Mar. 1957). British painter, novelist, and critic, the son of a British mother and a wealthy American father. He came to England as a child, studied at the Slade School, 1898–1901, then lived on the Continent for seven years, mostly in Paris. In 1909 he returned to England and in the years leading up to the First World War emerged as one of the chief figures in British avant-garde art. From 1911 he developed an angular, machine-like, semi-abstract style that had affinities with both Cubism and Futurism. He worked for a short time with Roger Fry at the Omega Workshops, but after quarrelling with him in 1914 he formed the Rebel Art Centre, from which grew Vorticism, a movement of which he was the chief figure and whose journal Blast he edited.

Read more
He served with the Royal Artillery, 1915–17, and as an Official War Artist, 1917–18, carrying his Vorticist style into works such as A Battery Shelled (1918, Imperial War Mus., London). In 1919 he founded Group X as an attempt to revive Vorticism, but this failed, and from the late 1920s he devoted himself mainly to writing, in which he often made savage attacks on his contemporaries (particularly the Bloomsbury Group). His association with the British Fascist Party and his praise of Hitler alienated him from the literary world. The best-known paintings of his later years are his incisive portraits, more naturalistic than his earlier works but still with a bold, hard simplification of form; the rejection of that of T. S. Eliot (Durban AG) caused Augustus John to resign in disgust from the Royal Academy in 1938.Lewis was the most original and idiosyncratic of the major British artists working in the first decades of the 20th century, and he was among the first artists in Europe to produce completely abstract paintings and drawings. He built his personal style on features taken from Cubism and Futurism but did not accept either. He accused Cubism of failure to ‘synthesize the quality of life with the significance or spiritual weight that is the mark of all the greatest art’ and of being mere visual acrobatics. The Futurists, he wrote, had the vivacity that the Cubists lacked, but they themselves lacked the grandness and the ‘great plastic qualities’ that Cubism achieved. His own work, he declared, was ‘electric with a mastered and vivid vitality’. He wrote several books, including novels, notably Tarr (1918), and collections of essays and criticism. Blasting and Bombardiering (1937), Wyndham Lewis the Artist (1939), and Rude Assignment (1950) are autobiographical.