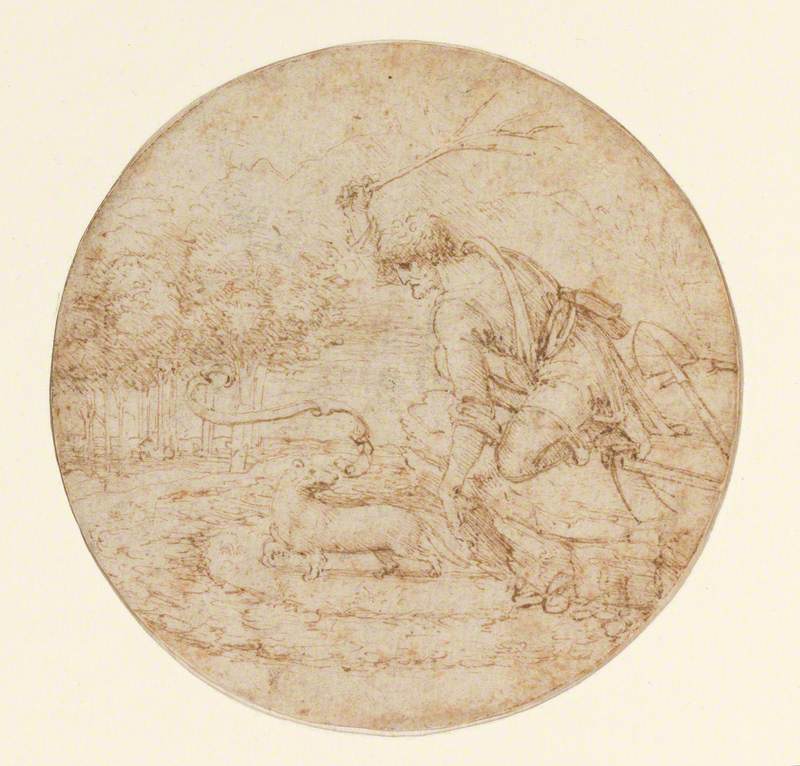 (Born Anchiano or Vinci, 15 April 1452; died chateau of Cloux, nr. Amboise, 2 May 1519). Florentine artist, scientist, and thinker, the most versatile genius of the Italian Renaissance. He was born in or near the small town of Vinci, a day's journey from Florence, the illegitimate son of a notary and a peasant girl. Vasari's biography and other early sources testify that he was blessed with remarkable beauty and charm as well as an extraordinary mind. In 1472 he was enrolled as a painter in the fraternity of St Luke in Florence, after serving an apprenticeship with Verrocchio. Vasari attributed to Leonardo one of the angels in Verrocchio's Baptism of Christ (c.1470, Uffizi, Florence), and the head of the angel on the left of the picture does indeed far surpass its companion in spirituality and beauty of technique, giving the first demonstration of the combined languor and intensity that is so characteristic of Leonardo's work. Verrocchio is said to have been so impressed that he gave up painting to concentrate on sculpture, and it is possible that he was content to entrust the painting side of his business to Leonardo, who was still living in his master's house in 1476.

Read more
Leonardo remained in Florence until about 1482, when he settled in Milan. Several pictures are reasonably attributed to the period before this move, among them an exquisite Annunciation (c.1473, Uffizi), usually regarded as his earliest surviving independent painting, and a portrait of Ginevra de' Benci (NG, Washington), probably painted c.1476 for the Venetian ambassador Bernardo Bembo. The most important work of the period is an altarpiece of the Adoration of the Magi (Uffizi), commissioned in 1481 by the monks of S. Donato a Scopeto near Florence and left unfinished when Leonardo moved to Milan a year or so later (he is first firmly documented there in April 1483). This painting and the numerous preparatory drawings for it show the astonishing fecundity of his mind. The range of gesture and expression was unprecedented, and such features as the contrasting figures of wise old sage and beautiful youth who stand at either side of the painting, and the rearing horses in the background, became permanent obsessions in his work.

Leonardo lived in Milan until 1499 (when the city was captured by French invaders), working mainly at the court of Duke Ludovico Sforza (Il Moro). He is said to have been initially recommended as a musician (he was a virtuoso performer on the lira da braccio, an instrument somewhat like a large viola), and in a letter to the duke listing his accomplishments he gives some idea of his versatility, writing of himself first and foremost as a designer of instruments of war and adding his attainments as an artist almost as an afterthought. This many-sidedness comes out in his notebooks, which are filled with technological schemes and investigations of all kinds into the natural world: Kenneth Clark called him ‘the most relentlessly curious man in history’. The price he paid for his versatility was a tendency to leave tasks uncompleted, as his restless mind wandered to some new venture: as Vasari wrote, he ‘could have profited more if he had not been so changeable and unstable, for he was able to study many things, but as soon as he had started, he abandoned them’.

Although he surpassed all of his contemporaries in the sheer beauty of his technique as a painter, this ‘mechanical’ aspect of his work was less appealing to him than solving problems of composition and characterization in his drawings, of which there is a wonderful collection at Windsor Castle (he was the greatest and most prolific draughtsman of his time, using chalk, ink, and metalpoint with equal skill). His dilatoriness dismayed his patrons and he left a high proportion of his pictures unfinished. This stress on the intellectual aspects of painting was one of the most momentous features of Leonardo's career, for he was largely responsible for establishing the idea of the artist as a creative thinker, not simply a skilled craftsman (see liberal arts).

Leonardo's two main artistic undertakings in Milan were a project for a huge equestrian statue (about three times life-size) to Ludovico Sforza's father, which got as far as a full-size clay model of the horse (destroyed; a bronze reconstruction was unveiled at the San Siro racetrack in Milan in 1999), and the wall painting of the Last Supper (c.1495–7), in the refectory of the monastery of S. Maria delle Grazie. The fresco method of mural painting was not flexible or subtle enough for the slow-working Leonardo, so he adopted an experimental technique that soon caused the picture to deteriorate disastrously. In spite of its sad condition, it has for five centuries been perhaps the most revered painting in the world. There have been many attempts to restore it, the most recent being unveiled in 1999.

Leonardo's other works in Milan included portraits, notably the superb picture of Duke Ludovico's mistress Cecilia Gallerani known as the Lady with an Ermine (c.1490, Czartoryski Gal., Cracow) and an altarpiece of the Virgin of the Rocks, which exists in two puzzlingly related versions, the earlier (Louvre, Paris) probably painted c.1483–5, the later (NG, London) probably in the 1490s, although it was evidently not finished until 1508. There may have been some studio assistance in the London version, but the finest passages, notably the heads of the Virgin and the angel, with their exquisitely curled hair and heavy-lidded eyes, can be by no one but Leonardo himself. The larger, bolder forms of the London picture show Leonardo's move towards the more monumental style of the High Renaissance, of which he was the main creator: incidental detail is reduced to create a greater unity of form and atmosphere.

Between 1499, when he abandoned Milan, and 1516/17, when he left Italy for France, Leonardo moved about a good deal. In 1500 he visited Venice and briefly Mantua (where he drew a profile portrait of Isabella d'Este, now in the Louvre), in 1502–3 he worked as a military engineer for Cesare Borgia, in 1508–13 he was based again in Milan, and in 1513 he moved to Rome, but the artistic activity of his later years was chiefly centred in Florence, where he was intermittently based in the years 1500–8. From this time dates his portrait of Mona Lisa (begun c.1503, Louvre), in which he showed a subtlety and naturalness of pose and expression that make most earlier portraits look rigid, and the wall painting of the Battle of Anghiari (1503–6), in the Palazzo Vecchio, Florence, where he worked in rivalry with Michelangelo. The battle piece was abandoned unfinished and the remains were painted over by Vasari in 1557, but something of its appearance is known from copies; fittingly, the most famous is a drawing by Rubens (Louvre) (a copy of a copy), for Leonardo's painting anticipated the dynamism of the Baroque and influenced battle painters up to the 19th century.

During this period in Florence Leonardo also worked out variations on a theme that fascinated him and presented a great challenge to his skill in composing closely knit groups of figures—the Virgin and Child with St Anne. In addition to various sketches, there survive a painting of the subject in the Louvre and the incomparably beautiful cartoon (which includes also the infant John the Baptist) in the National Gallery, London; the exact dates of these two famous works are controversial. During his subsequent period based in Milan (1508–13) Leonardo's main artistic project was for another equestrian statue, ironically to Gian Giacomo Trivulzio, the Italian general who had led the French army that drove Ludovico Sforza from the city. This got no further than drawings, and Leonardo received no important commissions after moving to Rome, where Pope Leo X (Giovanni de' Medici) was wary of him because of his reputation for failing to complete work.

In 1516 or 1517 he accepted an invitation from Francis I (a great lover of Italian culture) to move to France, and he died at Cloux, in 1519. Officially he was ‘first painter, architect, and mechanic to the king’, but Francis treated him as an honoured guest rather than an employee, allowing him to spend his time as he pleased. Although he made designs for court festivities, there is no certain evidence that he continued painting in France. The last paintings from his hand are probably two pictures of St John the Baptist (one later converted into a Bacchus), both in the Louvre (c.1510–15). They show the enigmatic smile, the dense shadow, the pointing finger, and the thick curling hair that rapidly became clichés in the work of his followers.

As a painter Leonardo triumphantly reconciled grandeur of form with exquisite precision of detail, and he introduced a new subtlety in handling gesture and expression. His work marked the greatest advance in naturalism in painting since Masaccio, and he had enormous influence (as is indicated by the large number of contemporary copies and adaptations of his pictures). His heroic figures and beautifully balanced compositions (particularly his use of pyramidal grouping) were the basis of the High Renaissance style, influencing particularly his two greatest contemporaries, Michelangelo and Raphael, and his subtle modelling through light and shade (see sfumato) showed the potentialities of the oil medium, which he was one of the first Italians to exploit. Correggio and Giorgione were among those most deeply influenced by this aspect of his work, and they also responded to his sense of fantasy and mystery. It was not only Italian artists who felt his impact: his style quickly spread to Spain, for example (see Yanez).

Leonardo's writings on painting were influential too; they were first published from his scattered notes as the Treatise on Painting (in twin Italian and French editions) in Paris in 1651, but they were well known before then. In sculpture and architecture no work that is indisputably by him survives, but his expertise and ideas were important in both fields. He is one of the very few artists whose reputation has from his own time onward always remained at the highest level, even though his output of completed works was small—a reflection of his remarkable personal magnetism, his extraordinary force of intellect, and his virtually single-handed creation of the idea of the artist as genius.