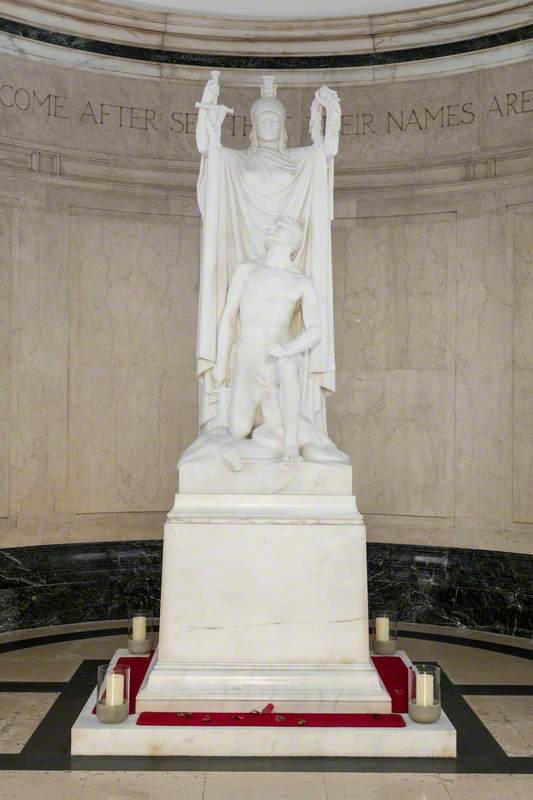 Sculptor of monuments and portraits in metal and stone. Born and lived in London, son of the Sculptor Richard Ledward, he studied for over 10 years prior to World War I at Chelsea Polytechnic, Goldsmiths’ College School of Art, the Royal College of Art and the Royal Academy Schools. In 1913 he won the Royal Academy Gold Medal and Travelling Studentship and the first British School in Rome Scholarship in Sculpture. Ledward became professor of sculpture at the Royal College, 1926–9, a year later being made member of the faculty of sculpture and of the council of the British School at Rome. Ledward exhibited at the RA from 1912, being elected RA in 1937 and a trustee, 1956–7. He was president of the RBS, 1954–6. As well as advising the Royal Mint, Ledward completed the Guards Division Memorial, in St James’ Park, London, other war memorials in the provinces and overseas and the fountains in Sloane Square, London.

Read more
The Tate Gallery holds his work, which can be both graceful and majestic. In 2002, the Henry Moore Institute archive, Leeds, acquired a major collection of Ledward’s drawings, covering his career from the Rome Scholarship until his death, enhancing the photographic archive of his work already held.

Oxford Dictionary of National Biography
Sculptor, born in Chelsea, London the son of a sculptor Richard Arthur Ledward. He was a student at the Chelsea Polytechnic, at the Academy in Karlsruhe, the Royal College of Art and the Royal Academy Schools 1907-13. The first artist to win a scholarship in sculpture to the British School at Rome, and a soldier in World War I, he was after the cessation of hostilities much sought after to execute monumental war memorials. However during his Rome stay the outbreak of war brought Ledward's travels to an end, but 1917 found him back in Italy, on the front, serving as a lieutenant with the Royal Garrison Artillery. He was called home in April 1918 and seconded to the Ministry of Information as an Official War Artist. In this capacity, he produced plaster reliefs for the Imperial War Museum which are typical of the dramatic compositions of soldiers in action surrounded by the accoutrements of battle that were developed in later memorial projects, notably at Harrogate in 1921 and Blackpool in 1923. Other major commissions in this vein include The Guards' Division Memorial at Horse Guards Parade, 1922-25 and he also designed sculpture for the Imperial War Graves Commission Memorial to the Missing at Ploegsteert, Belgium 1926-29. During the 1930’s Ledward turned from the traditional custom of modelling in clay to carving directly from stone.

While other artists pioneered the development of modern sculpture, ultimately towards the abstract, Ledward's work remained figurative. In 1934, he co-founded the firm Sculptured Memorials and Headstones in an attempt to promote carving by regional artists in native stone. He made architectural sculpture for many major buildings in the capital. He was Professor of Sculpture at the Royal College of Art, 1926-29, Henry Moore being his studio assistant. Elected to the Royal Academy in 1937 he was also President of the RBS 1954-56 and a member of the Art Workers' Guild. His works are in the collections of the RA and the Tate Gallery. A memorial exhibition of his work was held at Stoke-on-Trent Art Gallery in 1961. His Sloane Square Fountain, unveiled in 1953 showed his deco-inflected classicism still flourishing. His last major work was the colossal stone relief, entitled Vision and Imagination, completed in 1961 after his death, for Goodenough House in Old Broad Street in the City of London. It has since been removed to St. George’s Hospital, Tooting. He was awarded an OBE in 1956 and a centenary tribute to Ledward was staged at the FAS in 1988.

With thanks to artbiogs.co.uk.