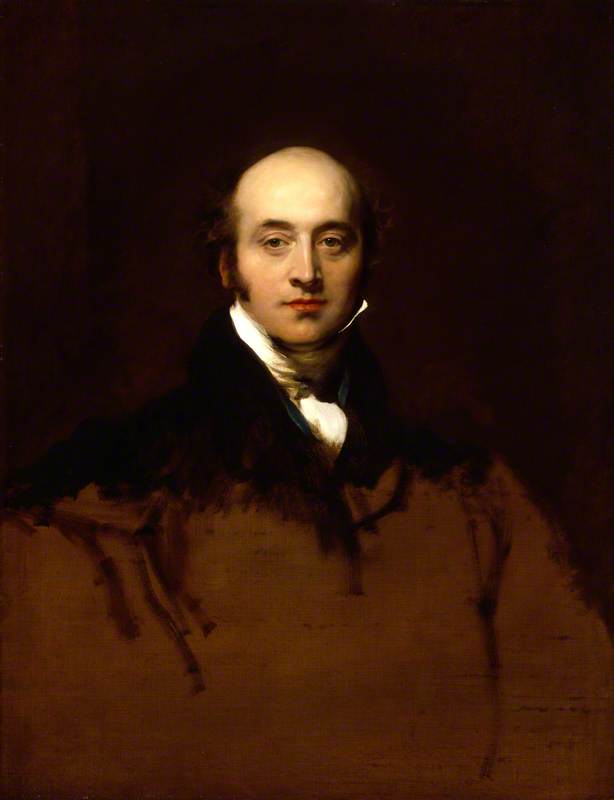 (Born Bristol, 13 April 1769; died London, 7 January 1830). The outstanding English portrait painter of his generation. Lawrence was a child prodigy and was almost entirely self-taught. He was also handsome and charming, and after a resounding early triumph with his portrait of Queen Charlotte (1789–90, NG, London) he never looked back in terms of professional and social success (the queen herself disliked the portrait, but it was acclaimed when exhibited at the Royal Academy).

Read more
On the death of Reynolds in 1792 Lawrence succeeded him as official painter to George III, and in 1794, aged 25, he became the youngest person to be elected a Royal Academician (although Mary Moser was a founder member when even younger). On the death of Hoppner in 1810 he was recognized as the leading portrait painter of the time, and also to some extent as head of the profession of painting in Britain. He was knighted in 1815, and in 1818 he was sent to Europe as the envoy of the Prince Regent (later George IV) to paint the heads of state and military leaders who were involved with the allied victory over Napoleon (the portraits painted on this tour—including some of his finest works—are now in the Waterloo Chamber, Windsor Castle). On his return to England in 1820 he succeeded West as president of the Royal Academy.

Lawrence was devoted to the memory and example of Reynolds and in some respects he was the last of the great portrait painters in the 18th-century tradition. In others he was a Romantic, responding to the glamour of the historic years through which he lived. His fluid and lush brushwork won the admiration of French painters when his work was exhibited at the Paris Salon of 1824 and after Delacroix visited London in the following year he paid Lawrence the compliment of painting a portrait in his style (Louis-Auguste Schwiter, 1826–30, NG, London).

Lawrence's reputation declined after his death, however, and has never revived to its former heights. In spite of his success he was constantly in debt and consequently took on too many commissions, so his work is uneven and sometimes careless (and like Reynolds he was a failure as a history painter), but at his best he has a feeling for paint that few British artists can rival. He was also a superb draughtsman, producing highly finished portrait drawings that rival those of Ingres in delicacy of touch and sensitivity of characterization (Mary Hamilton, 1789, BM, London).

Throughout his career he was a student of Old Master drawings, of which he made a great collection, particularly rich in works by Michelangelo and Raphael (these are now among the treasures of the Ashmolean Museum in Oxford). He played a part in founding the National Gallery and in securing the Elgin Marbles for the nation, and was noted for the unselfish help he gave to young artists.