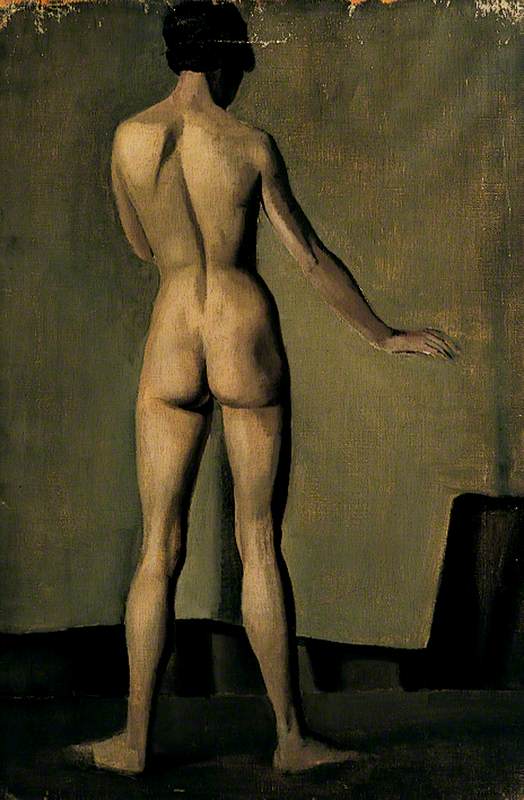 Study of a Woman Standing 1920

Painter and draughtsman, born in London, married to the artist Walter Thomas Monnington. She studied at the Slade School of Fine Art, 1915–17 and 1918–20. Her teachers included Henry Tonks and Fred Brown and she personified the Slade School tradition under their reign, her Composition: Mill Hands on Strike, for which she won a shared first prize for summer composition in 1919, having that firm draughtsmanship for which the Slade was then famous. She won a Rome Scholarship the following year, worked in Rome 1920–5 and returned to the Slade in 1927. One of her principal works was The Marriage at Cana for the British School in Rome, now in the National Gallery of New Zealand, in Wellington. Tate Gallery also holds her work. The British School and Fine Art Society put on exhibitions in 1995.

Read more
The catalogue indicated that until about 1919 Knights signed work with an interlocking W M K monogram, occasionally early on after marriage using Winifred Monnington. Knights died in London.

Oxford Dictionary of National Biography
Winifred Knights was born in Streatham, London in 1899. She studied at the Slade School of Fine Art (1915–17, 1918–20 and 1926–27) . In 1919 she jointly won the Slade Summer Composition Competition with A Scene in a Village Street with Mill-Hands Conversing. In 1920, she became the first woman to win the Scholarship in Decorative Painting awarded by the British School at Rome. She remained in Italy until December 1925, marrying fellow Rome Scholar Thomas Monnington (1902–1976) in April 1924. On her return to England, Knights received a commission to paint an altarpiece for the Milner Memorial Chapel in Canterbury. A major commission for the Earl of Crawford and Balcarres, on which she had been working for five years, remained unconcluded at her early death, aged 47.
Throughout her life, Winifred Knights produced work through which she explored women’s autonomy. Presenting herself as the central protagonist, and selecting models from her inner circle, she rewrote and reinterpreted fairy tale and legend, biblical narrative and pagan mythology. She was the subject of a retrospective exhibition at Dulwich Picture Gallery in 2016.